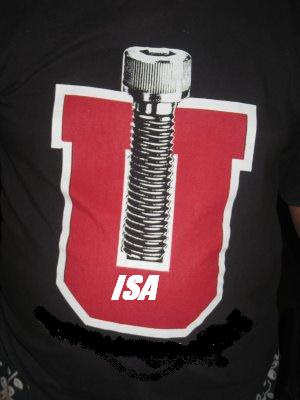 I RECEIVED AN SMS FROM LAILAH OF HITAM MERAH
REQUESTING FOR EXPOSURE OF THIS SHOW OF UNITY
AMONGST OUR DETAINEES.

ANYTHING FOR YOU LAILAH. CONTINUE TO BE BRAVE.

Re: Hindraf Detainee fasts in Solidarity with Jemaah Islamiah and Darul Islamiah Detainees for abolishment of ISA During Month of Ramadan.

This is the fourth week in the Islamic holy month of Ramadan that Hindraf legal adviser P. Uthayakumar who is currently in detention without trial in an open court of law and held at the Kemunting Taiping, Kemta Prison is fasting in solidarity with fellow Jemaah Islamiah (JI) and Darul Islamiah (DI) detainees for the abolishment of the draconian Internal Security Act (ISA). P. Uthayakumar hopes Prime Minister Badawi would urgently release all ISA detainees especially for the Jemaah Islamiah detainees, some of whom have been detained for seven years now on the occasion of this Hari Raya Aidilfitri.

At Kemta Prison there has been zero racial or inter religious conflicts of any kind among the Chinese, Indian and Malay Muslims. Hindu P. Uthayakumar and two other Chinese Buddhists who are fasting on the occasion of the Ramadan month are invited to join the Malay Muslims detainees during the breaking of the fast. This unity coexistence and racial and religious harmony is because of the equality before the law (Article 8 of the Federal Constitution) and there are no special privileges for any detainee irrespective of race and religion and no detainee asserts supremacy or the social contract.

In fact the 49 UMNO controlled BBC members who were sent to Taiwan for a working visit should instead have come and stayed in Kemta Prison to learn appreciate and implement true multi-racialism and multi-religionism in the works. But UMNO and the Prison authorities have denied Uthayakumar and the other two Chinese detainees who were fasting the right to buy special food and cakes which has been accorded to the Muslims detainees. They are trying to break solidarity between the Muslims and the non- Muslim detainees.

In fact many JI and DI members support Hindraf’s 18 point demands to Prime Minister Badawi dated 12/08/2007 and struggle for equality and equal opportunities especially for Indians who have for the last 51 years been excluded from the mainstream development. One JI member specifically said that while the government gave him and his siblings’ scholarships to study overseas and who are now all professionals in the business and corporate sector and graduates, and his Indian neighbours in Kluang, Johor are in the same position their parents and grand parents had been living. In fact this JI member in welcoming P. Uthayakumar on their first encounter with Uthayakumar in the first week in Kemta Prison was “I have been here for seven years and didn’t give up. Keep up the struggle”. This golden word has helped and has and will keep up Hindraf’s struggle for as long as it takes.


AT TONIGHT'S CANDLELIGHT VIGIL FOR ISA DETAINEES
I HOPE TO SEE MCA PRESIDENT AND MIC PRESIDENT JOIN US.
OKT SAY THAT HE IS ANTI-ISA
SAMY SAYS THAT HE IS DOING SO MUCH FOR THE HINDRAFF DETAINEE.

PROVE IT TONIGHT!
BE THERE, BOTH OF YOU, TO ENSURE THAT WE ARE NOT HARASSED.
Posted by zorro at 5:18 PM

If both these Presidents from MCA and MIC were to attend the Anti-ISA candlelight vigil, you can see the SUN RISING from the WEST!
Cakap, cakap banyak, no action.

MCA, MIC and Gerakan please don't talk cock anymore. Get your butts out and proceed to join the anti ISA march. The past few months have been so transparent to you. You are all 2nd rated. My saying of 2nd rated is actually a compliment. Koh Tsu Koon your picture was torn and stamp and they only ban him for 3 yrs. MIC yr appeal for Hindraf is totally ignored. You have to do better, probably kneeling down to beg may not be enough, you may have to lick and polish their shoes. MCA are u waiting for the next insult directed at you????

Why do some complain and "fight" from overseas?

Come on over and join the fight.

chow kit cowboy you stupid fool
the chairman has to be away in oversea so that he can continue the f-king fight. you want him to come back to malaysia so that he too is locked up and the fight ends there?

get your head out of your arse once in a while will ya??

If you're going Kamunting (visit RPK) this raya, pls sent my regards to him.

Malaysia is not a police state, we should put those offender on trial instead of detained them as syed's personal favorite.

lets show some support MCA or MIC fight for chinese or indian is just talk, they fight for their own power and their pocket only.

Zorro, that article moved me.

This shows Malaysians are capable of coming together irrespective of religion and race and other what-nots. So why can't we (outside KEMTA)? Why does it take a detention under ISA for us to understand this simple concept of unity?

when Anwarista's like zorro start demanding that we free terrorists, we know that this country is headed to the dumpsite if AI comes into power.

Have you guys lost your marbles?
do we have to wait for the twin towers to be blown down ala 911 for you to wake up?
listen to yourselves? free JI? are u crazy? we forgot the weapons seige the pulled from our military camps? u forgot the terrorist training ground the ran in the jungle? or their plans to blow up places where islam is threatened - niteclubs, beer refineraies etc..

what next? freedom for racists to hold seminars ala KKK?

have u guys so much hate for BN that caused your rationale to go all bonkers?

this is crazy. Bn may have many shortfalls, but its sad to see u all just hammering them for everything not right in this world..

terrorism is real..remember 911, bali, london trains, spain, taliban, pakistan....
do u want a big headline with 100 dead before u wake up?