WHEN ALL THINGS FAIL, USE THE ISA. 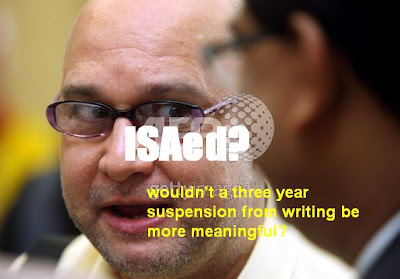 A distraught Sarah (Pete's youngest daughter) called to say that the police are in the house to arrest her Dad. Marina came on the line to confirm this. She said that they are arresting him under the ISA. Haris Ibrahim is currently in Pete's house. As this go to post, the police have already taken Pete away. Stay around for the latest developments.

Allow me to quote again from the man who crafted the ISA,the late Reginald H Hicklings:

"I could not imagine then that the time would come when the power of detention, carefully and deliberately interlocked with Article 149 of the Constitution, would be used against political opponents, welfare workers and others dedicated to non-violent, peaceful activities."

“This infernal and heinous instrument has been enacted by the Government at a time when the emergency was supposed to be over. Then it promptly proceeds to embody all the provisions of the Emergency Regulations which during the Emergency had to be re-enacted every year, but now it is written into the statute book ad infinitum...”

And what about this one:

Prior to becoming Prime Minister, Mahathir had also adhered to a critical view of the ISA. In 1966, when Mahathir spoke out in support of the Internal Security (Amendment) Bill 1966 as a backbencher, he stated that "no one in his right senses like[s] the ISA. It is in fact a negation of all the principles of democracy."

After becoming Prime Minister however the former premier had little if any hesitation using the law to suppress what he termed racialism but was seen by some as a move against his political opponents, the most notable of events being the infamous Operasi Lalang in 1987. But Najib was left scot-free and he was the most guilty.

I will want to find out WHO signed the order to detain RPK because:

Prime Minister of Malaysia, Abdullah Ahmad Badawi, went on the record in 1988 to state:

"If we want to save Malaysia and Umno, Dr Mahathir (then Prime Minister) must be removed. He uses draconian laws such as the Internal Security Act to silence his critics."

The year before, he had also stated:

"Laws such as the Internal Security Act have no place in modern . It is a draconian and barbaric law."

YOU SAID THAT SIR, NOT US.

WILL YOUR GRANDCHILDREN BE PROUD OF YOU NOW?

Absolute cowards TO HIDE behind the ISA. Racist Ahmad Ismail gets away scot free while RPK has to rot in jail under ISA. Thats bolehland!!!

No wonder, they unblocked the Malaysia-Today website as UMNO is going to get the HERO!

Please tell us what ordinary citizens like us can do in light of this treachery , and what RPK's thoughts are on his impending detention ...

...now that what he expect to happen has indeed happened.

But then as that Ahmad Ismail fellow said "don't push us against the wall or we will turn around and retaliate" or something like that.

So the flip-flop man is now beating his chest and letting out his war-cry.

ISA = the ultimate proof that BN has absolutely lost the plot.
BN, what do you gain when in the course of getting there you lose your own soul?

guess he was right to be suspicious when they lifted the ban...

all the rest of the high profile bloggers must also take some caution... just in case.

pls let me know if there is anything happening & if i can contribute anyway...

Let good sense prevail! This is not the time to be caught in doing things silly. Note that 'pure silver or gold' need to go through fire many times to be absolutely pure.

RPK's knows what he will be facing with his writings and his sacrifice for standing his ground will enter the history of M'sia as one man against the might of the regime. When the going gets tough, only the tough gets going maxim cannot be wrong.

The prayers of saints will surely comes handy now and let us pray too that people with evil intention will fail in their attempts to stroke the racial card to further their own political agenda.

I feel sad that such a draconian law meant only for the communist can be allowed to be continually used against people critical of the ruling govt even in this day of democracy. What we sow we shall reap! Let us sow goodness even in this trying times of political uneasiness and know that despite all odds against our wills, the Sun stills shine on each waking morning. The change had already begun in our hearts and it will not stop till we see a brighter and more righteous Malayia.

We are dealing with scum and cowards of the worst kind.

Which means we can defeat them easily the Ghandian way - non-violence, peaceful protests and non-co-operation.

To all those supporting RPK and Pakatan Rakyat for a change remember - the little non-violent resistance and peaceful protest each of us puts up will translate as a massive Tsunami that will sink our opponents.

So, each ou you out there, do not worry. Just make your litle moves, each his own way. Nature and a just God will take care of the rest.
http://donplaypuks.blogspot.com

Hi Zorro ... & Hi all ...
Our sleepyhead PM has proven himself to be a persistent liar. Similar to the famously ‘trusted’ US Presidents … in George Bush Sr … with his famous line “read my lips …” and of course the frisky Bill Clinton with his long strings of affairs with various women that walk his sights over the years … and he went on TV to lie and deny to the whole world (not confined to citizen of US alone), not once but several times over! … & our dozing Hadhari leader also the same … bottom line is that ‘WE CANNOT TRUST HIS WORDS ANYMORE. LIES AFTER LIES” So much for his tag line - Cemerlang, Terbilang, Gemilang. What a big joke!!
Our thoughts and supports will be with RPK & his unfortunate family. We will stand behind you RPK & family … we will work to pressure the current stupid government whom are working day-in-day-out to protect a failing cause – PM & DPM. The other monkeys (cabinet ministers) are all looking to protect their position. Good ridden to them too! Rot in hell you lot!!

I cannot teach you violence, as I do not myself believe in it. I can only teach you not to bow your heads before any one even at the cost of your life.
Mahatma Gandhi
Indian political and spiritual leader (1869 - 1948)

I read this from one online news site:

Below is the relevant portion of the news in Chinese, I will translate in English as much as I can.

This will answer your question on who signed the order to detain the three, RPK, Tan, and Teresa Kok.

the deputy minister chow of mca
confirmed :
" ISA on that lady is ordered from pm & botak one !!"