AN ATTEMPT AT A PICTORIAL DISSERTATION ON MAD COWS. 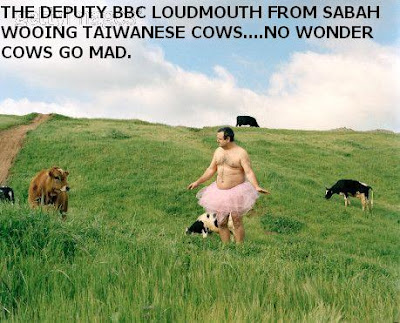 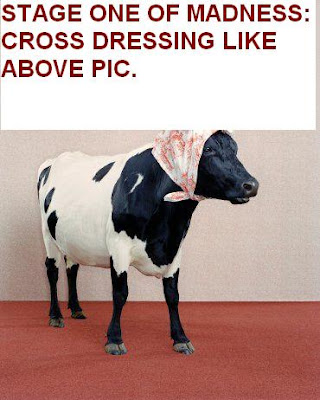 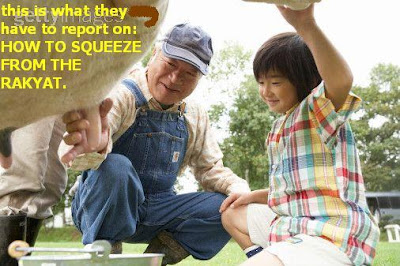 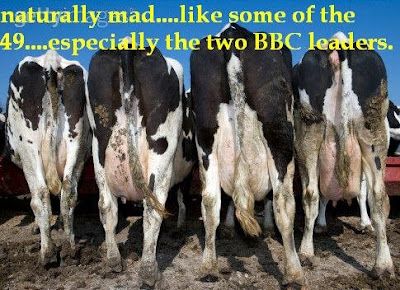 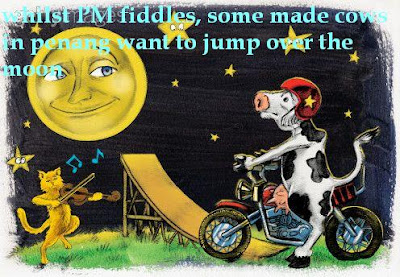 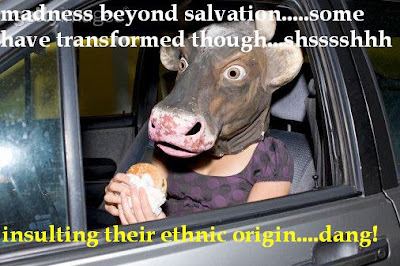 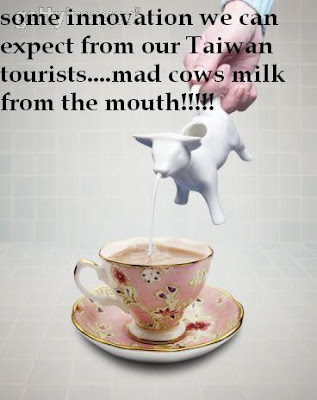 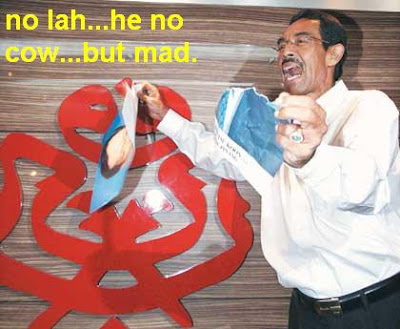 FOR A SCIENTIFIC DISSERTATION GO TO MALAYSIA TODAY (HERE)
Posted by zorro at 7:55 PM

u r churning out some wicked pix these days!!
v cool...

To make it short,all BN folks are mad and getting madder each day!!

Didn't know you are also expert in agriculture, especially in animal husbandry.

Btw the one which was most severely infected during the recent mad cow outbreak in Penang, although has been quarantined, still suffering from acute diarrhea. Most probably it is terminally mad and need to be put to sleep.

Actually he's having his orgasmic release, judging from his Neanderthal facial expression.

They cannot hide, they cannot run and whatever they do they are done.

Is that why we have 54 MPs trying to find a cure for it in Taiwan? Or are they trying to escape from the "germs".

How about a quarantine chamber for all these mad cows coming back from Taiwan. We don't need too many of them running wild in our streets.

U made my day.. that was the funniest thing I read today bro... really loved it..

I just hope the cows will not get mad at you for degrading them by comparing them to these human cows.

You amaze me with your nice pixs. Keep it up uncle.

The last brute looks like an antagonised GOAT trying to repel the hoof of ah-mad cow that got stuck up his ass. Look real close. Can you see the pain he's in? Arggghhh...

Hey, i came across this very good entry which i think more should read..maybe you wanna consider reposting it on your blog..though i'm not sure is what is written is true, but it sure is interesting..

A female TV reporter arranged for an interview with a farmer, seeking the main cause of Mad Cow disease.

The Lady: "Good evening, sir. I am here to collect information on the possible source of Mad Cow Disease. Can you offer any reason for this disease?"

The Farmer stared at the reporter and said: "Do you know that a bull mounts a cow only once a year?"

The lady reporter (obviously embarrassed):" Well, sir, that's a new piece of information, but what's the relation between this phenomenon and Mad Cow disease?"

The Farmer: "And, madam, do you know that we milk a cow twice a day?"

The reporter: "Sir, this is really valuable information, but what about getting to the point?"

The Farmer: "I am getting to the point, madam. Just imagine, if I was playing with your tits twice a day and only screwing you once a year, wouldn't you get mad?"

He's a Malaysian Malay Muslim. This is how he behaves during the Ramadan month ya...

This must be a good example for all puasaing Muslim. Especially to the younger ones....

I am sure this picture by now is on paper & news around the world.

I as a citizen of Malaysia do NOT condone this barbaric behaviour.

Uncle Bernard, forget the cows - *I* will go mad if I see a minister wearing a tutu and dancing the ballet!!

It doesn’t matter if Ahmad Ismail is suspended for 3 or 30 years or maybe 300 years if he lives long enough for that. What matter most is his undying will to stir up racial politics in Malaysia from Bukit Bendera.

Aside from his supporters, there isn’t anyone that supports his ultra-Malay ideology. Ahmad is in his fifty and with his current strength in UMNO its unlikely he will ever hold any minister post in the future that’s why he has to gamble with the Ultra-Malay ideology in order to rocket himself to the top.

Politician are really asshole, they will do anything to gain power.

Within a year, the disciplinary committee of UMNO will, on apppeal, commute AI's (Artificial Intelligence) 3-year suspension to 1. As a sign of his rehabilitation, he will be given the lion's share of a directly negotiated non-tendered out mega $b public works contract, hidden through a convoluted maze of private nominee companies.

In bolehland no warlord retires poor or bankrupt!!

Please also take a swipe at Dr.M for his Social Contract 3 blog where he says Malays are ready for insurrection to take back their land with the help of friends from neighbouring countries! I am beginning to believe that Indian-Muslim mamaks pretending to be pure Malays/Bumis will be the death of UMNO. Hey, that sound good!

Also, where does BBC have funds of its own as claimed on tv by Rosemajibbed? Say $300K for air-fares/hotel etc and $25 million loyalty bonus. Is there a BBC charity like the BN wives charity? Who has inside info?

Some try to move it faster by 15 minutes, some by 30 minutes.

Nobody thought of moving it backwards. I wonder Why?

guys... check out this video (if u missed it on MT)

those morons know their time on the titanic (BN) is nearing the end so they will stir up shit any way they can. ISA was used to quell opposition is sadly not used this time. Such abuse of the draconian act.

lets look at the RUKUN NEGARA HOW MUCH IT HAS BEEN RESPECTED AND ABUSED BY UMNO AND bn.

(Perlembagaan America syarikat dari tahun 1776 hingga hari ini, ada kurang daripada 30 amendements (pertukaran) -Drafted by Thomas Jefferson between June 11 and June 28, 1776, There are currently twenty seven articles of amendment to the United States Constitution. The first ten of these were ratified simultaneously and are known as the "Bill of Rights")

Uncle Zorro,
I am a vet by training;three days ago I came across a new case of Mad Cow Disease in Selangor.
Apparently,this animal consumed tempe and was injected with botox.
I have recommended to the Selangor goverment that this animal and all those that associated with it to be culled.

I have just received (at 1.24 pm) a call from Raja Sara that her Dad, Raja Petra Kamaruddin, has been taken in under ISA and that their Police are at their residence. Dato Ahmad Ismail, UMNO Bukit Bendera Division Chief, gets away with a 3-year suspension for his racist remarks with intent to incite unrest, and Raja Petra gets the ISA for being “a threat to national security”(?). This makes a mockery of the Rule of Law

Bernard, I have renamed and readdressed my blog...if I still can have the honor of being on your roll la.....

As you are aware by now, our commandent blogger Pete, has been arrested under the heinous ISA. Since you are second in bloggers command, you need to take up the jihad under your command to continue fighting this evil force. So the time has come for zorro to fight the evil so that justice of all Malaysians will not be trampled upon. We are all awaiting for Zorro's instructions.

You may want to consider joining the “Please ISA Me” wave (psygame playing lah) so that they will think twice before handcuffing you.

I am begging you to ISA me
http://thexstories.blogspot.com/2008/09/i-am-begging-you-to-isa-me.html

woh,one more mad cow on the lose in selangor

too many mamak in the cabinet,they only know how to make teh tarik

so many mad cows on the lose,pulling Bladywi's nose around