WE WILL CONTINUE TO REMEMBER OUR ISAed BROTHERS. 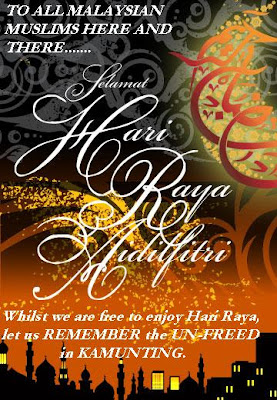 While I wish all my muslim brothers and sisters a Selamat Hari Raya with lots of happiness and joyous closures in the family, I take this opportunity to wish the most hated thing in Malaysia aka botak, and the mongolian murderer and all his cohorts a very unpleasant Raya and an everlasting and undying conscience that will haunt them for generations and generations. May they rot a thousand rots in hell.

We should not only work toward abolishing ISA but also the BN-UMNO regime!!

I wish all Malaysian Muslim SELAMAT HARI RAYA,may our New Malaysia come true a.s.a.p.
And I also wish all the corrupted UMNO a corrupt Hari Raya,may your first bite of kueh raya choke you to hell.

The application for habeas corpus should be directed at section 2 of ISA 1960(1972).

RPK is not a 'terrorist' according to section 2 of ISA.

Let's also speed up the Abolishment of ISA & Free RPK and all ISA detainees .

The UMNO Clown Botak and his cohorts must be made to taste their own medicines when the time of reckoning comes very soon.

Leave BN, all Component Parties with a conscience must leave the Evil Master Oppressor UMNO for good ok??? Leave & let them, the UMNO clowns to settle the horse trading between Flip Flop and C4 ok???

Come October 2008 there is nothing left but the Opposition Leader’s Post to Hand Over from Flip Flop to C4 ok???

There should be no peace for Botak if the ISA detainees are not released and the oppressive draconian law is not abolished because such injustices are not tolerated and thus create great discontentment in this modern society. One day Botak and his cohorts should be made to eat their own medicine for the injustices they have committed against the detainees especially RPK, our Brave Hero no doubts.

We call upon all the Rakyats of Malaysia to sign a Petition to be sent to the Yang Di-Pertuan Agong to release RPK from his detention under ISA because there is a hidden agenda of a conspiracy of using his detention to silence him so that he could not further release more evidences against the real C4 murderers of Altantuya because all the accused were all fall guys of the real murderers because they all did not have a real & logical motive to murder the Mongolian Lady.

THE NEW DAWN OF MALAYSIA HAS COME & THE FIRST THING IS TO ALLOW APPEALS & THEN RELEASE ALL ISA DETAINEES, ABOLISH ISA, OSA, SEDITION OR WHATEVER ACTS THAT COULD BE EXPLOITED AND MADE PREJUDICIAL AND OPPRESSIVE TO THE VOICE OF DISSENT FROM ALL THE RAKYATS.

It is very easy to generate Police Reports against DSAI by using Penang Mamak Umno’s 25 Members headed by Wan Abidin Zain, who claimed to be non-partisan, using their uneasiness that most Penangites will now be boycotting Nasi Kandar one more round???

It is very Sad that the legacy of Malaysian Independence is reduced by this Moronic Flip Flop Coward into great disrepute and a laughing stock of the whole world and knowing very well that the UMNO Government has technically collapsed and they have lost locus standi to govern but yet he has decided to shamelessly still cling on to power via dubious means like hiding himself via using of the ISA and we cannot imagine that the Malaysia Moronic Flip Flop Coward has now stoop so low and using the Police Deputy IGP as his willing tools especially the Deputy IGP’s clearly taking side as the Police must be neutral and should be not politiking for him.

The Coward Moronic Flip Flop Chicken dare not meet DSAI face to face to settle matters but chose hiding under the use of ISA and that is what you have as a disgraceful cowardice leader for UMNO.

After 51 years MALAYSIA IS NOT GOING ANYWHERE but backwards because of the Oppression from the UMNO goons’ divide and rule fear tactics the Rakyats have matured & you must see all this coming because All The Rakyats of Malaysia are all fed-up & can no longer with-stand the hypocrisies, bullshits, lies and deceits of these UMNO Clowns now in Power ok??? What Oil Subsidies IS nothing but a hoax that the UMNO Government MAKE BELIEF THAT THERE IS AN OIL PRICE SUBSIDY TO THE PRICE OF FUEL BUT IN FACT THERE WERE NONE THIS IS BECAUSE MALAYSIA IS THE NET EXPORTER OF OIL THAT IS ONLY AFTER DEDUCTING DOMESTIC CONSUMPTION THE BALANCE IS EXPORTED TO EARN FOREIGN EXCHANGE. THESE LIARS MAKE US BELIEVE BY CONTINUOUS PROPAGANDA THAT THERE ARE OIL PRICE SUBSIDY BUT IN FACT THERE WERE NONE BECAUSE THE PRICE DIFFERENCE BETWEEN ACTUAL SALE LOCALLY AND THE PRICE THEY INTENDED TO SELL ABOARD IS AN OPPORTUNITY COST NOT PRICE SUBSIDY.

We urge all BN Components & MPs with a conscience to do the necessary to make possible a New Malaysia for all Rakyats of Malaysia so that all our children and their children & their children’s children’s future will be safe and secured in the Country we all love and not be intimidated by those UMNO Clowns now in power with their oppressive & fear tactics and in the verge of making Malaysia a Police State if left unchecked otherwise. Save RPK as he is the midst of a conspiracy of the real murderers of Altantuya to silence him for good, instead of being C4ed he could be poisoned and worse off if he is on hunger strike by himself. The Acting IGP is defending the Police position after being made the tools of UMNO’s fear tactics & so he is now making lame excuses for being the Stringed Puppet to be easily manipulated by the Puppeteer, power that be. The Deputy IGP must be held personally responsible for the safety of RPK who has been heard to be tortured otherwise he must be made to eat his own medicine come the New Dawn of Malaysia.

Moronic PeeM and Botak Home Minister last minutes’ attempts to cling on power by using the fear tactics of using the ISA at their whims and fancies selectively against dissent & tried to deny their own actions as they now have no balls to face the wrath of the all the Rakyats of Malaysia. ONE DAY THE MORONIC BOTAK AND FLIP FLOP AND C4 MUST BE MADE TO TASTE THEIR OWN MEDICINE OK?

Justice MUST BE DONE for Altantuya and for all those detained under ISA without the trial nor the rights of appeal. Light-up a Candle in the Lantern of the Mid-Autumn Festival for them all to usher in the NEW DAWN OF MALAYSIA COME 916, 2008