FOR THE FIRST TIME I WILL GO TO AN OPEN HOUSE....BUT IT WILL BE WITH A DIFFERENCE. 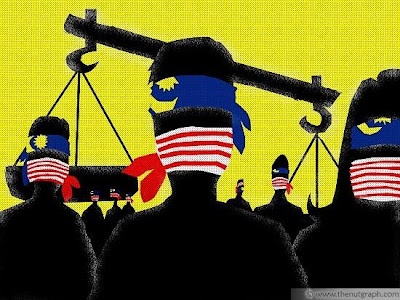 StarOnline would not have made a mistake about the open house at PWTC. The first session at 11:30am is for the Privileged and the second is for the Not-So-Privileged. I am convinced I belong to the Privilege class as I was born here and so was my father, grand-father and great-grandfather.
I suppose the second for the Not-So-Privileged are for the immigrant workers. It is good of the BN Government to think of these people who helped build all our white elephants and detention centres. But I ain't no immigrant....not even a squatter. Dang, I did own a property which I have now bequeathed to my son. I am a Malaysian of Chinese ancestry unlike some people of mixed breed but want to SQUAT as Malays,and in the process, defiling the pure Malay strain. Sheesshhhhh.

I thus certify myself as Privilieged and will go to the open house for the 11:30 session I will be wearing this T-Shirt. 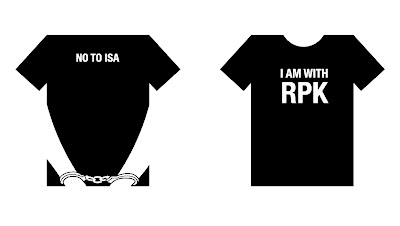 
I visited People's Parliament and this is Haris' message for those who want to come along:

"I’ll be meeting up with friends in the vicinity of Secret Recipe at the Mall around 11.00am before moving on to PWTC.

For those of you who must have further details, you may contact me at no.bn.no.isa@gmail.com"

SELAMAT HARI RAYA TO ALL MY MUSLIM BROTHERS AND SISTERS.

uncle zorro, i will meet u & the rest at PWTC on 11am. but, i still don't get that 'baju raya' though... never mind, i'll try to call the above number now!

Ha Ha Ha,well said zorro,wish I could join you guys too,but I am too far away,any way if you enjoy ketupats plz do savour some on my behalf too,really missed those delicacies lar.

i hear ya loud and clear, uncle B! lamb curry, sambal sotong all awaits you! now dont you go and stuff in too much while sharing your meal with dollah!

I am writing this as you guys gobble it all up, hopefully having a merry good time. Hope you guys are all very loudly proclaim your presence. Most importantly you are al made very welcome of ocurse.

Can you imagine what kind of a Raya it would be if the police and men in blue are present alongside KGB's good friends, our Special Branch? Well, if htey are present,share your food with them too la...They may be on duty, so I hope you guys are civil enough, being the good MAlaysians we are, to ta pau some food for these men.