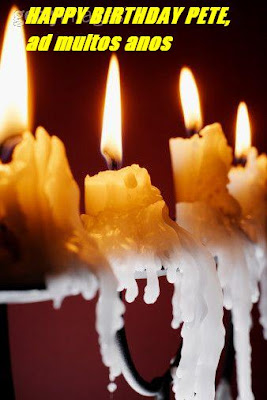 Marina and Sara visited RPK this morning to be with him on his birthday....but just for 45 minutes. Marina just called in at 2:30pm and reported that he was in better spirits. 7 books were brought to Pete but they only allowed him to have three.

His minders are going to all out to demoralise him. They told him that his appeal for signatures for his release appeared not to draw any attention. Marina told him the support of the public is encouraging and mounting.

He has been receiving cards from the public. We are surprised that they delivered these to him. People, flood Kamunting with your cards:

You just can't imagine the impact your greeting cards will have on him. So keep the Taiping/Kamunting Post Office busy.

HOW ABOUT THIS, TAIPING PEOPLE.
TONIGHT TAKE YOUR FAMILY OUT AFTER DINNER
AND LIGHT CANDLES OUTSIDE
TTP IN SOLIDARITY WITH WHAT WILL HAPPEN
OVER HERE IN DATARAN MERDEKA IN KL.
THOUSANDS ARE EXPECTED TO GATHER
FOR A CANDLELIGHT VIGIL
TO SAY NO TO ISA
AND FOR THE RELEASE OF ALL ISA DETAINEES.
Posted by zorro at 2:19 PM

Woi!.. Pak Lah and Home Minister!.. Release all ISA detainees as you claim all of you good Muslim and this Ramadhan is the best time to show your affection and love.

It would be nice if someone can organise a special buka puasa Kenduri at a nearest point closest to TTP on the eve of Raya and all can join in to break fast together with our brothers who will be breaking fast on the inside while we on the outside, and we can hold a candle light vigil after that. I don't mind chipping in.

why make life so difficult for yr ppls.... we love u so much and elected u to the top post of the country...we still never lost hope on you....release another one we love - RPK, this country need both of you to bring us to the great Malaysia and Malaysian