DANG PROUD I AM OF YOU GUYS OUT THERE. 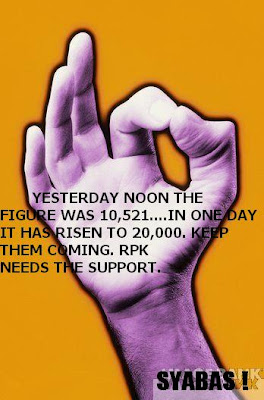 We can still do better yet. Keep those signatures coming in. For what RPK had done and his sacrifice of personal liberty, that's the very least we can do to express this outward support. He needs it, we need it and damn, this whole Nation needs it just as bad. Pass the word around. It does not take a minute to log in and sign your name in the growing list. Let's all make a concerted effort to do what we feel it's right, what we say it's right and what we want is right. No more, no less. For the good of the rakyat, for the good of our children and our children's children.
malsia1206

There are some things i agree to disagree with you Reverend ... This! " Well Done ! Most men do NOT know what it is like for a wife to lose a husband,a son or daughter losing a father,a sister losing a brother and the list can go on as you know.But Karma ... is indeed a funny thing.

May the force be with you.

Though I doubt that the "arm-trister" government will even look at this petition, I gladly sign it in the name of JUSTICE!

A Step To Abolish ISA By 18 people

Should I pop the question at Tuesday's "Abolish ISA" forum on how many PKR, DAP and PAS members have signed up? Surely, they must have several thousands, if not millions, who can put their virtual 'john hancock' on the Lim Teck Ghee petition.

Maybe Tony Pua can try to consolidate the signings from his petition with the one done by LTG but they need to sort out any duplications, no?

I bet this would works. Those goons will not even look at the petition as long as they in power. The only way to get rid of ISA is to change the whole UMNO leaders who are kuraped..oh (sorry wrong spelling I mean corrupted).

What in their mind is "Ingat Saya Anjingkah?" suka hati mau suruh. That is the reason why they would not listen to anybody but only themselves. They are mart people there at UMNO, don't you think? I admire them at times, especially when they create comedy scene with their ridiculous statement. May God Help Us All.

Zorro,
See Sheikh's latest blog. He has the feeling that they are coming for more of us bloggers. Take care.

I've did my share of signing it and I'll help to spread the word as well.

Bernard
is there a problem with the petition as I can see ALL the signatures ie names of people?

I remember the petition to the Agung recently where I was unable to view any names but my own.

Do we want our name made available to all & sundry?

Pardon me on questioning this privacy matter. I was in the data security biz so I do get a bit...emmm...private?

Presenting the petition to the Agung & even Badawi is 1 thing but allowing all to view everyone's names?