JUST DO IT! THAT IS IF YOU REALLY CARE! 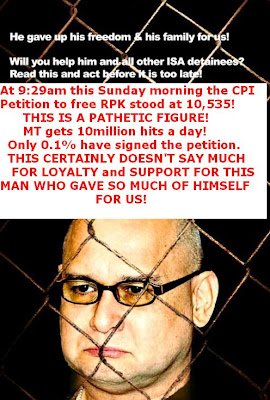 POSTED 9:48AM SUNDAY 21SEPT.2008
AT 10:30AM AT THE CHINESE ASSEMBLY HALL,
18 SUPPORTERS WILL SHAVE BALD
TO SHOW SUPPORT FOR RPK.
WE JUST NEED YOU TO SIGN THE PETITION, NOTHING MORE.
THIS PETITION DOES NOT REQUIRE YOU TO GIVE YOUR IC NUMBER.
WHAT ARE YOU AFRAID OF?
THIS APPEAL IS ONLY FOR THOSE WHO HAVE NOT SIGNED THE PETITION.
http://www.petitiononline.com/isa1234/petition.html

THERE HAS BEEN SOME DISSENTING VOICES ON THE PETITION. I SUGGEST YOU READ HARIS (HERE).

THE SPIRIT OF THE PETITION IS TO FREE THOSE IN DETENTION.
TAKE IT NO OTHER WAY.
ZAID RESIGNED FOR NO OTHER REASON THAN THE INJUSTICE OF THE ISA.
I CANNOT SAY MORE TO CONVINCE YOU TO PUT YOUR NAME TO THE PETITION.
LET'S NOT READ TOO MANY THINGS INTO THIS DIRECT SPIRIT OF THIS PETITION.
LET'S CLOSE RANKS AND WORK TOWARDS A NEW MALAYSIA.
Posted by zorro at 9:45 AM

Come on folks, dont abandon RPK. This is our country and we all own it together.

i noticed that there are prominent bloggers like susan loone who have posted entries that DISCOURAGE people from signing the petition because of the wording. perhaps u can impress upon them the urgency of the situation. i tried. got "reprimanded" and got sarcastic response from these people.

There is a problem that may have escaped many: One cannot 'register' their vote on MT unless they have the password / registered with the site.

So, may I suggest that it be made easy for visitors - make it more like what is possible on your site.

Let us pray together

CT CHOO: I want you to read Haris' take on this in my latest update on this same posting. I thank you for being a signatory and your defence of the petition.

JD: I have given the link to the petition.It is not necessary to get into MT. The petition link is available on this posting. JD thanks for your continuing feedback on this blog. Let's meet again.

Anon10:06. You have captured the true essence of the petition. I thank you.

Was not aware. Just signed, the pleasure was mine.
Will try to get a few more Malaysians to sign living down here.
It is a pity, the old mindset remains...either indifferent or chicken heart, expecting others to do the dirty work.

Done it and will do anything to fight injustices. Will not be bullied.

I totally agree with you. We should not miss the woods for the trees.

We should still have the ISA to put Khir Toyo behind bars; but not at Kamunting, instead we should put him together with the gorillas, orangutans and chimpanzees at Zoo Negara. He may come out reformed.

I signed on the very same day the petition goes online and emailed to those in my contact list.

Comeon Malaysian, JUST DO IT!

I have already signed and thought the petition was already closed. Typical Malaysians. Talk a lot but when told to reveal identify like IC, they hide and become silent. Come on everyone, sign the petition to save RPK and other ISA detainees. Save the people who fight for you. Don't be a coward.

I signed some four days ago!

Just saw this petition on mt. Didn't realised there was a petition, else would have signed it earlier.

However, I see that the petition only require name and email address. Wouldn't that meant that it is open for abuse?

JUST SIGN IT !! Stop talking, stop analysing, we don't have much time left, think of our next generations, just think of RPK without windows, without sunshine, day after day, RPK's Freedom = The Rakyat's Freedom

Bernard, I'm one who was going to sign the petition but what stopped me is that the petition not only demands the release of raja petra and teresa. But of all ISA detainees!

I know ISA is unjust, but what scares me is I don't know the profile of the tens of ISA detainees currently being held.

Uncle B - I must admit that I am one of the late-signers, mistakenly thinking that it was another petition (along the same lines) that I'd already signed.

In any case, mistake rectified... and as an atonement, I've posted my own appeal.

To those concerned about the petition calling for the release of ALL ISA detainees, consider this:
There are sufficient laws in Malaysia under which the detainees could have been charged. Why weren't they?

I don't have an answer either, but my guess is that there is no real evidence against them, only suspicion. If there were evidence, why not charge them in a court of law?

The basic tenet of any legal system is the presumption of innocence. Until proven otherwise.

hELLO mr khoo CAME ACROSS YOUR bLOG THRU mt2DAY , WHAT A SURPRISE, ...I USED TO PLAY FOOTBALL FOR YOUR TEAM SIR...HOW ARE YA!ITS BEEN A LONG TIME ...BACK IN THE LATE 70'S ..78,LIKE THAT ..ANYWAY ITS NICE TO KNOW THAT YOU STILL ABOUT AND KICKING.ANYWAY, I VE SIGN UP THE PETITIONS TO FREE RPK.....HAVE A GOOD WEEKEND MR KHOO!

Thanks J.....how's the significant other? Got to meet up one of these days....when the New Malaysia comes to fruition.Cheers brother.

C'mon every Malaysian,
If you consider yourself a just person who would like to see justice prevailed in Malaysia, don't talk much, no more deliberation, just sign the petition. You'll regret when one day injustice is being acted upon your love ones. Don't be a damn coward as there's nothing to be afraid of. Just do what you have to do to uphold freedom & justice. RPK has sacrificed so much for all of us and has so far been our fighter for freedom & justice. We owe him respect and obligation. Right, JUST DO IT!

RPK's life under threat lah = polis protection needed ! whereas,
the 'bukit wretched rat' is NOT
unless the python smells 'it', then the polis comes to rescue lah !!

To all fellow Malaysians who yearn for the release of our beloved warrior,

You must understand that Pete put his life on the ropes in the hope of improving the nation for all of us and this should not be how we re-pay his honourable deeds. Everyone seems to be making a big fuss about hitting at least 20K by tomorrow but looking at the bigger picture, we hardly hit 0.2% of the total hitters. We need to step up the campaign and get the awareness out to our colleagues, neighbours, families and friends to contribute to this cause and to further spread the information out to their colleagues, neighbours, families and friends as well.

We shouldn't be thinking twice about supporting Pete's devotion to OUR nation and let us all show how much we support, love and adore Pete, Marina & the family.

God Bless and may the good LORD open your eyes, ears & heart.

If say, 10 million, no, ok 1 million fellow Malaysian sign the petition and the government arrest DSAI under ISA saying that he is "OUT TO TOPPLE THE GOVERNMENT BY FORCE", doesn't that mean we actually agreed that he can be ISA'ed. Malaysian politician are very good with word's or what they call "SPINNIG" (PANDAI PUSING). Don't be cornered. I mean how difficult is it to come up with another petition as many of us requesting? Why must we stick to this one? We want ISA to be abolished and use the proper law to give all offenders a chance to defend themselves. That is what we are figthing for. I don't think RPK will agree with this petiton. As much as I understand him he is a man with principals "NO MEANS NO" not "SINCE IT INVOLVES ME, WE CLOSE ONE EYE LA". We have to stick to our principals, stand up to what we beleive in and fight for it all the way. Victory will be ours soon. Please don't change the course due to emotions and sentiments. Think about it guys. Something to ponder and please......... come up with a new petition. Cheers. Mr.Right K.

please don't be carried away with your praises and in the process compromise on your objectivity.