THE WORD IMPOSSIBLE CAN ONLY BE FOUND IN THE DICTIONARIES OF FOOLS - Napolean Bonaparte. 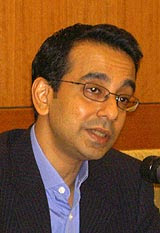 
The fight has not ended, it has just begun.

Let me first apologise to you for not having given you an update yesterday. It was a trying day, the culmination of a period of work and stress that began the day RPK was detained. Not just for me but for the other members of the team, in particular Ashok Kandiah and Neoh Hor Kee.

You would have read of how the application was originally fixed for the 26th of September. It was through the enormous efforts of both these lawyers that the hearing was brought forward as it was. It was also through their efforts that the necessary court papers and affidavits (statements on oath) by RPK were obtained as quickly as they were. It was primarily due to their efforts that when, as lawyers say, I got up on my hind-feet in court yesterday, we were ready to give it the best shot we could. I believe that the case we would have mounted for RPK would have been virtually unassailable.

But out attempts were impeded.

I say impeded because at this juncture we do not know whether the High Court is going to hear the original section 73 application now that the Minister has issued a detention order. A fresh application can also, and will be, filed to challenge that order. To be fair to the judge concerned, Suraya Othman J, she considered herself bound by precedent that she thought tied her hands. She acted fairly, albeit conservatively.

A second habeas corpus application will also be filed to challenge the Minister's order. We started working on it yesterday. In truth, we are handicapped; the ISA precludes comprehensive review of such an order. Added to this is the legal position that such an order is issued by the Minister at his subjective discretion. The courts have been reluctant to interfere with the Minister's discretion, save on procedural grounds, on the basis that, firstly, the law does not permit otherwise and secondly, the Minister knows best about national security.

This is the massive obstacle we are faced with.

This is one of the reasons why a section 73 detention is converted to a section 8 detention when the IGP is confronted with a habeas corpus application; the issuance of the Minister's order narrows the scope of review and permits the Minister to shield himself behind a veil of national security. RPK is not the first victim of such a strategy. We experienced the same difficulty during the so-called JI detentions in late 2002.

There are however peculiarities about RPK's detention that may give us footholds to ease our ascent. The media has reported that the Minister issued the detention order on the recommendations of the police. These pertained to the so-called anti-Islamic articles that RPK has supposed to be written. We at least know the basis of the detention and are able to bring it into focus when we get to court.

There are also no other legal tricks that can be pulled by the Ministry. The issuance of the detention order is as problematic for RPK as it can get. Some have said that this makes the detention virtually immune from challenge. I would like to think that the interests of justice can always be served if we remain hopeful of finding the path to it.

Every case in court brings us into uncharted territory and with it surprises. I have had my share. In 2001, Justice Hishamuddin ordered the release of Abdul Ghani Haroon and . He also prevented the police from re-arresting the two. I was in court the day he pronounced the orders and the sheer exultation I felt as he did remains with me to this day as has the awareness that there are those who will do the right thing when times seem darkest.

RPK and the other civil society leaders who have shown us the way started a process to transform this country. This legal campaign is a part of it as is the mounting civil society pressure against the ISA that have spring-boarded off his detention and that of Theresa Kok, Tan Hoong Cheng and the HINDRAF 5. RPK knew what would happen and lent himself to the process. For that that reason above all, he is firmly ensconced in my mind as a patriot.

We must not lose faith. The fight has not ended, it has just begun.

Thank you Zorro for this update from Malik.

We will await with anticipation as to how this will work out in favour of our dear Pete.

BERNARD THIS commment is off topic but I am mightly pissed off with this particular pseudo turban wearing mamak, regarding his pseudo ' YOU INSULTED MY RACE AND THE POOR FOLKS SYNDROME' READ HERE THIS MORONS COMMENTS.
http://mahaguru58.blogspot.com/2008/09/isa-food-issue-teresa-kok-before-and.html

If you want to putar belit its your problem lah bro, but have a principle, you seem to be a person who sways with the wind like lalang, is that your character. the whole excercise of the dog food is a media spin of misdirection of utusan, and the bn govt. SINCE THEY HAVE BEEN COUGHT WITH THEIR PANTS DOWN. When you can't seem to see this than you really must be blind or live in your own world. FIRST PLACE,I ask you, why was the jawi writting brought out now, and for that matter, logically, do you notice how small the words are , while driving would you logically be able to read the road sign. I am not harping about the jawi writing. Lets cut to the chase, why was teresa kok arrested under the ISA??? She was arrested under a pretext of lies, lies which were denied by the respective mosques, why arrest her, the jawi writting is brought up on a pretext. Show me on the constitution or any gazatted bill where it is stated that road signage should be in jawi, or any law to that matter THAT SHE HAS BROKEN, don't forget, it is the very same UMNO WHICH PRACTICALLY KILLED off THE JAWI SCRIPT from our daily life and they are harping on this same issue, why the double standards.

It is a BORIA, DIKIR BARAT, AND DONDANG SAYANG all put together in other words a media SPIN BY UMNO AND UTUSAN for damage control, if I remember correctly you wrote an article if I am not mistaken, praising teresa kok recently on how she resolved quietly a mosque issue in some condominium, isn't that true, not even a few weeks later you are on a different spin, when she spoke on the quality of food being on par with dog food, you and a lot of people took it personally that that is the poor mans fare, let me ask you, why is that poor mans fare, ISN'T THE UMNO LED GOVT, TAKING CARE OF THE POOR in this case malays, since you are taking this personally, I assume you are spearheading the move for the poor malays, why are the Malays still poor, and why is their food of such poor quality,? don't they have NEP SCHOLARSHIPS AND ALL THE OTHER OPPORTUNITIES THAT UMNO LIKES TO HARP ABOUT, especially the slogan ' KETUANAN MELAYU" WHERE HAS ALL THE HELP THE POOR MALAYS GONE TO. has it been pocketed on the way by UMNORIANS??? CAN YOU PLEASE ANSWER THIS QUESTION. The whole problem started when teresa kok was arrested under the ISA on the pretext of some lies, well her statutory human rights CUM HER LEGAL RIGHTS as a MALAYSIAN CITIZEN WERE VERY SEVERLY ABUSED BY THE UMNO GOVT. Now you and a lot of your kind are harping about something tak ada kena mengena with her rights, well it is her opinion the food tasted like dog food, That doesn't necessary need to mean it not rich mans fare, if the food is stale or basi, even my dog won't eat the food so why are you so worked up. This just goes to show how mature you are or how much of a bigot you really are, eventhough you state otherwise, Please for gods sake take a stand and stick to it, don't be a lallang, neither here nor there.
P.s. I have never come across ever in my life that the nasi lemak is only for the poor nor for the rich, whats in the nasi lemak, MALAYSIANS ACROSS THE BOARD LOVE NASI LEMAK, NOW DOES THAT MEAN IT IS A RICH MANS FARE OR A POOR MANS FARE, WHAT SAY YOU CHAMPION FOR THE POOR.
I get the impression you are very lost and misguided, I will let you in on a secret....pssss...MALAYS DON'T WEAR TURBANS THEY WEAR SONKOK. I find it an insult as the turban is stated by law of Malaysia is the RELIGEOUS dress uniform for the sikhs, and they don't like others insulting their religion.

In short and simple term,the detainees are at the mercy of the police and the judiciary.

They can twist and turn the rule of laws to their benefits.

At the end of the day,it is law my ass and justice my foot in Malaysia.

bravo artic turban. a very well said indeed. and sometimes i wonder what are the proirity and principle of the muslim. are they really following the teaching of islam to uphold the truth, the justice and the freedom?

don't blame me to have this perseption on muslim. because of your silence which deems as agreement on this evil act under the name of your religion has won you a bad name.