ONE GETS CALLED IN; THE OTHER CAME OUT 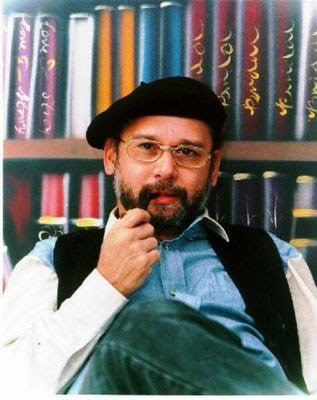 Remember the last time they, the cops, paid an univited visit to Raja Petra (here). He had just recovered from a bout of flu and was in no mood to entertain uninvited government guests, Marina played the genial, gracious hostess, showing them around the house, pantry, maid's room, toilet, bathrooms, the cat's corner, the swing-around book-shelves that doubled as shelves for Raja Petra's babyhood to childhood toys. I forgot to ask Marina if they looked under the bed or knocked the walls for hollow response revealing a hidden annex. Must ask her that. Evidently they took copious notes that they could not understand and as such, before leaving told RPK that he would have to come in to make some statements, to elucidate and elaborate whatever. "I am free only after Permatang Pauh," volunteered Pete. The head cop said OK and this morning at 10:00am, was quiz time at the Commercial Crime Department.

The press corp was gathered under the bus-stop together with RPK's well-wishers: Gus picked me up from the Press Club and we met up with Boom and Rudy, Philip, Bala the mayor of Bungsar, Angela and son from Seremban, Aloysius Pinto, K W "WICKY" Warren and new blogger delCapo.

Everything was over within 90minutes. Now we wait. Will they charge RPK. If they do, it had better be before September 16. 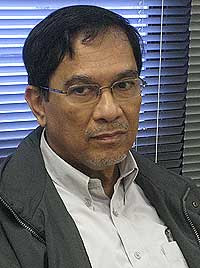 
Dr Mohd Osman Abdul Hamid, the doctor who examined Mohd Saiful Bukhari Azlan, appeared in public today to stand by his claim that he found no evidence of sodomy on the alleged victim.

The doctor, who was accompanied by his lawyers - M Puravelan and Yusri Kamarudin - called a press conference at the Bar Council auditorium at 12 noon today.

He confirmed that the statutory declaration, which was published in the Malaysia Today website was indeed signed by him.

"I am not involved in politics, I always tell the truth," said the soft-spoken bespectacled doctor who sounded slightly nervous.

In the statutory declaration, Osman stood by the leak medical report where he did not find any sign of sodomy after examining Saiful's anus.

Saiful has claimed that he was sodomised by his ex-boss, Opposition Leader Anwar Ibrahim on June 26.

Anwar was subsequently charged with the offence a few weeks later.

Osman said that he was calling the press conference "to clear his name".

from a prepared statement, Osman said he went on leave as he came under pressure following a police investigation into his medical check-up on Saiful.

He also said that he did not know how his medical report on Saiful became public.

To a question if he was still in employment with Pusrawi, Osman said he would be returning to work as soon as possible.

He also dismissed claims that he was worried for his safety.

"I am the doctor who affirmed the statutory declaration dated Aug 1, 2008.

I had gone on leave. There was a lot of pressure on me. I am now back in . There has been a lot of media statements in made by various individuals.

Some of these statements have put me in a bad light both professionally and as a person. Please be assured that I had merely done my job as a doctor. I am not involved in politics. I will always tell the truth.

I have never at any time breached my professional ethics. I have always practised doctor patient confidentiality."

READ THE Q&A SESSION AT THE PRESS CONFERENCE (HERE)

Mr Zorro sir. i would strongly advise you and you readers to take a trip to the Petronas Gallery, Suria KLCC on the 3rd floor and enjoy the fabulous Merdeka Mural that is there in the back.

I think that every single Malaysian citizen should take the time to admire this masterpiece of Malaysiana. It made me feel proud to be a Malaysian -- AND I'M NOT EVEN MALAYSIAN, which is a strange feeling.

Imagine what it can do for you and all that peruse your blog. Highly recommended. And it's FREE to get in. Please do pay it a visit. It is a reminder of what Malaysia really is, and not some political spin. It is very beautiful.

Please take the time to see it, they say a picture is says a 1000 words, I think this one says 25 million people.

I hope you take my advice, and I'm sure it will make you feel better. Malaysia is full of goodness

If RPK is doing damage because of patriotic ideas, isnt this do more damaging?
Been following them for a week or so and they are from Philipines.
MCMC, please do look into this.

Timbo.
Appreciate your advice. It is easy for a non-Malaysian to appreciate things malaysiana. How long have you lived here, worked here? Of course this is a great country. But there is corruption in high places; there is duplicity in the government; there is executive interference of the judiciary; there is rampant wastage of funds; Credit Suisse just sent out an advisory against investment in the Malaysian Stock Edchange. What does that tell you? There are some 20,000 UNEMPLOYED GRADUATES? What does that tell you about our education system NOW.

Timbo, go enjoy your mural whilst we malaysians work harder for a BETTER MALAYSIA than it is now.

You asked us to look at his face. He has an honest face. Sure he does. Not like the faces of many Malaysians who go around pretending to preach and tell us what to do or what not to do. We now all know who these Malaysians are after 51 years of Merdeka and 45 years of the fromation of Malaysia.
malsia1206

I hope TV3/Bernama will report it in their nightly news tonite. Surely, will pay attention to "bahasa wajah dan gerak".
aMiR

Dr Mohd Osman, apparently, has a good reputation among his peers. I was told by a doctor who knows him that he is known for his skills and knowledge in medicine and also for his credibility.

speaking of ins & outs gets me excited =]

guess who is also out? Ahmad Ismail!! gave his statement finally..

i think its due to bandwidth congestion during peak hours.

Will be nice if you posted Botak Syed Hamid's face next to Dr Osman...we will really know how an honest face looks like!
What happen to botak, has he lost his power of speech...very silent lately. Plenty to say on Anwar's sodomy charge and very quiet on this bloke, Ahmad's seditious comment?

Please don't assume I don't understand, please MR Bernard sir. I read your blog everyday, I have been here long enough to known more dirt and wrongness about this place than I ever wished to know.
However as a foreigner I have to stay clear of the politics, as it is not my place to interfere, I'm sure you understand.

However I sincerely believe that a painting such as this - which is not your usual multicultural blah blah - could help you, the BR and the Malaysian people in your cause. It affords a place to all, whether rich or poor, good or bad. It is the most objective piece of Malaysian history I have seen. And there's no doubt that a lot of the problems here have their roots set deep in the past, and many opinions perpetuated based on ignorance of the past, or bullshit historical "education". That's all.

You might think it's a shit painting, I know, but I think it's quite powerful.

I sincerely hope that you can help usher in a new day, because the people here deserve so much better. But just swapping the head won't do much to the toes. The TV + radio are controlled, the internet is cybercopped and books are not read by anybody, but a painting? How hard is it to look at a painting?

Please send my undivided support and warm wishes the next time you meet or talk to RPK and Mdm Marina. Now there is talk from Syed Hamid that ISA would be used against Pete and I'm truly starting to get worried for him.

Timbo....if I read you wrong I am sorry. I apologise if I over-reacted on this one. Let me buy you a drink sometime. email me.

" no, no.. nothing rong in your black hole !" checked bye the burmiss.
Beberapa jam kemudian :
" wow ! aiyah !lu tersodomed lah !
cepat kasih polis tau !" checked by doktor di KLH !
What happened within that few hours
b4 he went to the KLH ah !!??