THEY LIT THEIR CANDLES TOO.

In my posting "REMEMBERING OUR BROTHERS IN KEM KAMUNTING" on Sunday 31 August, I thanked Chris who was in Taiping for lighting candles for the ISA detainees.If Chris was in KL, for sure she would have joined us at the Wharf. She took Junior back to Taiping to visit her father. I reproduce here from Malaysia Today this story:

On 31 August 2008, Merdeka Day, a family of three decided to do a candlelight vigil outside the Kamunting Detention Centre. It was certainly brave of them -- a woman, her son, and her brother against the entire apparatus of the Malaysian government.

What was more touching is the fact that this Chinese family was in solidarity with the mostly Malay Internal Security Act detainees in the detention centre, whom the government alleges are Islamic terrorists. The fight for justice transcends racial boundaries.

And they were smart. If there had been four of them, then, under the Police Act, it would have been classified as an illegal assembly and they could have been arrested. But since there were only three of them, they escaped the long arm of the law.

A salute to Chris and her family. Have we finally understood the true meaning of Merdeka? When there are still many being detained without trial, how can we say we are now Merdeka? And since 1960, an estimated 10,000 Malaysians have been detained without being allowed their right to a fair trial in an open court. 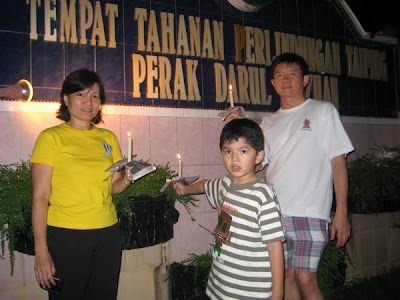 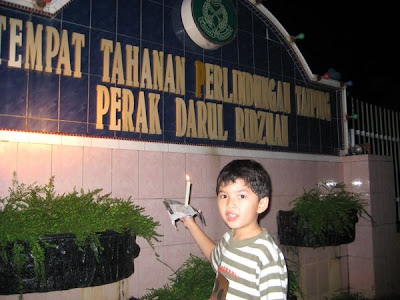 When I announced that we, the Barisan Rakyat Bloggers were celebrating Merdeka Day with a Candle Light Vigil at the Wharf in solidarity with our detained brothers in Kem Kamunting, I received this thank you note:

so kind and thoughtful of you and friends to do this...

hopefully one day all of the detainees will be released..and we have to keep on pressuring the government to release all of them.Some of them might be released but many more still detained...and the government thru their TV1 tried to potray how good the ISA is in their latest documentary shown on the 26th of august..Diari Pasung ISA..

really wish we could join but baru saja came across this entry...

Wonderful,tapi nak tanya ya.PAS has a fund for the familys of the datainees ..ummm..bloggers have created for themselves an "emergency" piggy bank in case they r charged in court..have u all decided to create a fund for them?umm?No point burning candles,when we know the family's of the dataines r suffering a lot.Ahmad Lutfi Othamn,the editor of Harakah said PAS has a fund amounting RM53,000,and they cater for everyone,indians,chiese,malays.IMO50k not enuff,do u agree,mr zorro?

Touching hearts through gallant deeds. Thanks to Chris as the mum and her 2 fine kids. Yes, the humah touch transcends the racial barrier. Glad and happy to note there are still Malaysians out there who really make an effort to care. UMNO, are you listening?
malsia1206

They think Malaysians are so dumb and ignorant to the point that they can call us pendatang and immigrants at PP and then just few days later the PM makes speeches about discrimination against race and religion.

As for those ISA detainees, free them if you can't charge them! Else charge them in court with case and evidence. Don't waste their life for 2 years by keeping them there!

inggeris is not my mother tongue but i guess it's better than those in UTHO :
pls refer to an adverorial in NST on 23/8 & an apology from NST (on line) on the 26th. tq.

zorro, I am very glad you made yourself counted and in your small way, you have encouraged many to do likewise...to fight for justice. The credit goes to you. I am honored to be a fan to your blog, if opportunity permits, I will be more than glad to meet you and we shall have a chilled beer.

This is a good one Uncle Bernard. I think we should not let those languishing under the ISA to be forgotten.

Suv, I read you loud and clear. I made a comment in HAWKEYE JACK'S BLOG that our gesture of a candlelight vigil is too simple. We need to do something more substantial. I remember after our 100days event we raised some funds for bloghouse and Rocky did mention some pledge to help ISA detainee's families. This was the time when a detainee was allowed to go home to visit his critically ill daughter. He was on the road when she died at around 6pm something. I will remind Rocky about this.

Wandereraus: never refused a session of piss/grog with any "aussie" mate. We try to do aour little bit to make this a better place for those who come after us....like my grandchildren-to-be.

Crank: my comment (above) to Suv matters. I think you were there when we raised funds. We need to do what we say we will do. Too often we get carried away by the moment. How are you doing?

maybe there can be a continuous candle vigil at kem kamunting, every night, and only 3 person at a time....

Your commenter's suggestions are all good and noted. Not enough is being done for the welfare of the detainees. I hope to contribute a portion of my zakat this holy month of Ramadhan for them via PAS.

The very fact total strangers ot the ISA detainees make time to light candles show that human values are still alive in this quasi-police state where people are detained on trumped up and frivolous charges without access to a court of law to prove their innocence.

Lighting a candle at the Kamunting Detention Centre everday would be futile unless it is highlighted to the rakyat.

But how is it possible with the neutered MSM?

Can we expect WCW to voice out in favour of the abolition of the ISA?

Can we expect the component parties in BN to go against UMNO and demand the release of the detainees without and preconditions?

I humbly request Zorro and other bloggers to have a brain storming session and come with more tangible amd viable ones apart from the symbolic lighting of candles.

One such move might be to assist the families of the detainees as suggested by Suv with help (monetory or otherwise) as it would really show we care at the same time lessen their financial burden.

Is it preposterous to suggest that you start a donation drive to ameliorate the sufferings of the victimised?

Malaysians on the whole are a caring and generous lot. I am sure they would contribute to a worthy cause irrespective of their ethnicity and religious affliation.

Your blog has become a beacon to most caring Malaysians. Please keep up the good work.

Uncle Bernard, yes I was at the AllBlogs 100days event. I'm aware that ISA rights are not the biggest priority for the average Malaysian.

But I'm very convinced that incarcerating someone without sufficient reason is a crime. This makes our government criminals.

where is info for fund to be found?

BRAVE Family Chris. You are bringing great social awareness to your kids' lives!

Let all races work towards NO MORE ISA.

& plse remind me - exactly who is the isa protecting at the moment?

Bernard!
A little goes a long way
A smile brightens my day
A sa'alam gives me peace
A note , a song a stanza
Tells me all is well.

We do a little at a time
And as our thots & wishes
beam across to Kamunting,
something will begin to stir
and hope begins to spring
within all our detainees.

Way to go Chris and family. Merdeka wishes to you and you family. Good people doing some good things. Nice to see race does not matter to these Malaysians. The struggle goes on.
Bernard,you should put up more of these kinda stuff!
cheers

Way to go Chris and family. Merdeka wishes to you and you family. Good people doing some good things. Nice to see race does not matter to these Malaysians. The struggle goes on.
Bernard,you should put up more of these kinda stuff!
cheers