BOTAK, I NEED YOUR OMNIPOTENT PROTECTION. 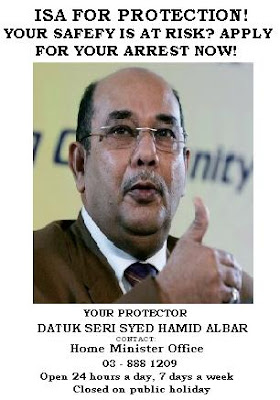 LORD PROTECTOR, I BESEECH YOU, BECAUSE EVEN GOD SEEMS TO HAVE ABANDONED ME IN MY HOUR OF NEED.
I NEED YOU TO PROTECT ME FROM A MOB CALLED THE DANDELIONS. THERE ARE MANY OF THEM.
SOME OF THEM OPERATE OFF-SHORE.
THEIR TENTACLES ARE FAR-REACHING.
THEY CAN PUT THE ILLUMINATI TO SHAME.
I NEED YOUR PROTECTION BECAUSE I CURI THIS POSTING (BELOW) FROM THEM. I HAVE NEVER BEEN AFRAID BEFORE.
TODAY I FEAR THEM.
THANK GOD YOU HAVE COME FORWARD AS THE PROTECTOR.
FOR YOUR OWN PROTECTION YOU SHOULD READ THIS IN YOUR TOILET, DIM THE LIGHTS AND AFTER PERUSAL, GIVE IT A FULL FLUSH.
I DEPEND ON YOU.
A LOT OF MALAYSIANS DESPISE YOU.
THEY WILL KNOW YOUR TRUE VALUE ONLY IN THEIR HOUR OF DIRE NEED.
I AM NOW IN DIRE NEED OF PROTECTION.
PLEASE LAH SIR PROTECT ME FROM THE DANDELIONS.
ONE OF THEM INFILTRATED THE BLOG HOUSE CANDLELIGHT VIGIL AND I AM BEING TARGETED.
PLEASE TUAN PROTECTOR,
PROTECT ME FROM THAT DANDY MOB.
++++++++++++

THIS POST I CURI WILL GET ME INTO TROUBLE BUT I MUST RELY ON THE PROTECTOR.

News around the world in response to Syed Hamid’s statement on that Sin Chew’s journalist Tan Hoon Cheng was detained for her safety as the police believed her life was “under threat”:

1. In an immediate response, a housewife who has been in debt with Ah Loong ( money lenders or loan sharks) has applied to the Malaysian Home Minister that she would like to be arrested as soon as possible under ISA.

2. Kevin Rudd is sending an emissary to next week, to work with the Malaysian Police, the Malaysian Home Minister and the Malaysian Prime Minister to see how the law could be interpreted in . HE will be pushing his law makers to pass a new law similar to that will allow Australians to be detained by the police if they feel threatened by Italian mafia, Chinese gangsters, and all other undesirables.

3. In , an accountant asked the government to introduce this new law soon, so that innocent people could find protection from the undesirables.

4. In another breaking news, next to be arrested under the ISA is Miss Tan’s mother who bought vegetables at the Bukit Mertajam market during the Ramadan period as the wet market was alledged to have become very slippery. She is expected to be arrested at her home after coming home from the market for her own safety under the Internal Security Act.

5. The Malaysian police’s ability to nullify a threat to Miss Tan’s life within 20 hours has won accolades throughout the world. FBI, CIA, Mossad and MI-6 will be sending their crack team to for intensive field training.

You are penalising yourself with a trip to the Wharf, like that also can. I also want.

The buck has to stop here, and right now.

Mr. Honorable Prime Minister, what does it feel like if you were 72 years old and had an only daughter that you educated and who landed a responsible job which she held for so long, but had to be snatched away all of a sudden and you had to run halter-skelter to see her only the next morning?

I think to even let your men speak - explaining that it was all done over sixteen hours merely to protect the poor girl makes a mockery of our government.

Every citizen is shocked not only at the lightning detention but find it shockingly unbelievable that such are the reasons being dished out for the ISA detention.

Can you Mr. Honorable Prime Minister not see and sense the agony of the aging parents who have raised a responsible career minded professional journalist?

Well, suppose we accept that what was published in the paper was not right, do you not then think that the paper that employs her should be hauled in to explain? Why do your men pick on a single soul - the journalist, who is certainly not the one who decides what gets published in any paper.

By this very act, the Prime Minister and his courtyard have brought great disrepute to this nation - unless of course you rebut, "this is an internal matter and therefore it does not give anyone outside the country any right to comment".

Please do not betray the trust of the 51% of voters who chose to have the BN back in power. Just check the hand phone texting traffic in the country on this issue and you will know the ridiculous position of the actions being taken by your men and women.

The buck has to stop, and stop here it must to save the nation of worst perils and image agonies.

The Muslim Consumers Association of Malaysia, Heritage Associations, Malay Cultural Organisations and Related Bodies Cooperation Network yesterday lodged police reports against Teresa Kok over her "alleged act" to prohibit the azan call. As a social and cultural associations, they should show to the general public that they are run by good intellectuals who can provide good examples on righteousness, fairness and integrity. To make such police reports after the fact that the Masjid had denied the involvement of Teresa Kok on the azan issue, the confirmation by the residence association that Teresa Kok did not initiate any petition and that the blogger at the Pembelamelayu Blog has appologized on the mistakened allegations made by him, it makes one wonder what is the motive of such police reports now! It has been told that Islam forbids slander against anyone. So in this holy month, why are such actions taking place against the truth and supporting lies by these muslim associations?

Now you know WHY we lost Pulau Batu Puteh.

An asshole was in charge of the case.

hahaha
we always knew you are funny !

we will get you out of wrongly legal protective custody if we feel you have been in appropriately denied your world human fishing rights !

You can count on us !

Reporter: Why was Tan detained under ISA?

Syed Hamid: To protect her. You must understand that her life was threatened.

Reporter: Then why was she released after only 18 hours?

Syed Hamid: Because under ISA, we offer only one-day protection!

My cat needs protection from the neighbourhood hound dogs. Can Botak please instruct the police to "arrest" my cat under the ISA?
Please?

APPLY FOR YOUR ARREST NOW?

Not much need to be said about Baldy the Blurry @ The Seemen from Yemen @ Botak the Kotak, as he has displayed time and again his inability to handle the job as a Home Minister.

Zorro,I too will curi something from you here.

'LORD PROTECTOR OF THE EMPTY BOXES, I BESEECH YOU TO BESIEGE ME..'

Despite the seriousness of all the 3 ISA arrests, you had indeed injected some humour in your post. Our hearts are with RPK and Teresa KOK for now. And our 'welcome home' greetings to Tan, the Sin Chew reporter. When this nation mourns the grief of this debacle, it's so heartening the rakyat becomes one big family to give their undivided support, irregardless of race and religion. This is the very best of Malaysia we like to see. But this Government does the exact opposite and show us their very worst.
malsia1206

aNON6:22: I hope I did not offend you. Black humour sometimes puts across the message more effectively.

the fine print says: Protection only for 16 hours. After that you have to be rearrested to be safe.

wahahaha...(laugh until vomit blood)...
you just made my day, thanks a million!

oh by the way, posted a link in my blog to this post, hope u don't mind.

LOL!!!
No worries Uncle Zorro. The news of the "goodwill" of our Home Minister must be indeed spread out to all of Malaysians, so that the desperate (Ah-Long Victims esp) will know where to turn to.

Although that poster was barbie's post, I'll tumpang along for the makan at the Wharf anyway...... :)

Bo...bo bo..botak (stammering)... is trying to explain that black is actually white,,,!

NO NO NO more MAMAK STALLS !!