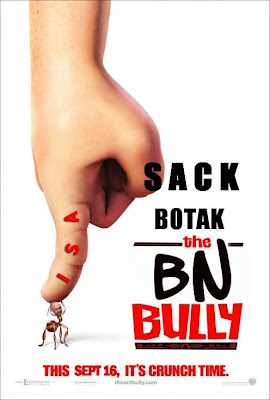 PIC BY BODOHLAND
(with my addition 'Sack Botak")
Bodohland thanks for forgiving so readily.
GO to my blogroll and visit all his creations.

BY THE BY, IS WRITING THE TRUTH ABOUT THE MINISTER A THREAT TO THE SECURITY OF THIS COUNTRY?

A CHEEKY FRIEND OF MINE SENT THIS SMS THIS MORNING:
If your life is in danger, please get arrested under the ISA. Coverage is limited to 16 hours only. Interested parties are advised to contact our Special Agent with semen....oppsss strains for a detailed summary, terms and conditions.

THIS WAS THE SENTIMENT EXPRESSED BY THE 160 MALAYSIANS WHO STOOD IN THE BLOG HOUSE DRIZZLE FOR SOME THREE HOURS DURING THE CANDLELIGHT VIGIL FOR RAJA , THERESA KOK AND ALL OUR KAMUNTING DETAINEES.

This candlelight vigil was a last minute initiative by Nat Tan. Announcements were made at 4.00pm thru blogs and sms. Some 160 caring Malaysians responded. Nat, YewTube Tony and I wish to put on record our thanks for your response to this event. We also like to thank Datuk Ambiga, the President of the Bar Council, Members of Parliament YB Wee Choo Keong and Sivarasa who took Sunday evening off to join us. Of course, I must register my thanks to six uniformed and six un-uniformed police personnel who hung around the vicinity. If you mata-matas were there to protect us from one mad-assed Home Minister, we thank you.

THANK YOU AGAIN PEOPLE.....WE MOVE TOWARDS A NEW .
THE ORGANISERS OF NEW INVITE YOU TO KELANA JAYA STADIUM TO HERALD THE ADVENT OF NEW AND ALSO TO LEND SOLIDARITY TO RAJA KAMARUDDIN, THERESA KOK, AND ALL ISA DETAINEES.

GOD BLESS YOU ALL AGAIN. SEE YOU TOMORROW AT 8:00PM.

That botak is the worst moron...uncultured one...no words in the dictionery can describe it..(he is an 'it').

There is Harmon in the house of Pharaon.
Act of desperation cowardice and sheer ignoramus. Papa & Baby Doc Duvalie`, French and US tyrants reign poverty and fear on the Rakyat of Haiti for 4 1/2 decades.
That's until they flee seeking asylum with their ill-gotten wealth leaving the country in squalor divided and perpetually broken.
I fear the semblance and we ain't short of the mindset.
Free RP!Free All! ISA detainees, you illiterate gluttonous coward.
Stick to your principle Zaid.

this is for BN - http://www.youtube.com/watch?v=s9JLe7mUIB4

All Governments lie. They have to lie at some time on some issues. This is the essence and trademark to survive. So you lie because you need to. When all the chips are down and out, lying is the only option to cover your faults. But Botak Menteri lied in such manner that was insulting to the mindset of the Malaysian rakyat. He lied through each and every one of his tooth. If his explanation that the reporter was detained for her own protection, then every 'along' victim can get the same treatment too. And there would not be enough cells at Kamunting to hold the numbers. If any Malaysian Menteri has to lie, please do it more convincingly. Do not treat nor assume the public is a bunch of imbeciles, just like lot in Putrajaya.
malsia1206

I can sense serious desperation in Botak Alblur's recent statement critisizing YB law minister Zaid Ibrahim. His response also shows that he seems to be contradicting his own press release when he said that the police did the ISA thing and it was not motivated by him or BN. His statement also shows the serious rift in UMNO top echelon as appended below:

Whatever happens, Botak can be rest assured that his balls will be fried soon either by Anwar if he takes over power or by Che Det, if Razaleigh-Rais-Muhyiddin takes power. Che Det and the Sultan of Johor are not going to forgive Botak AlBlur for his incompetence in loosing Pulau Batu Putih to Singapore and the impending loss of EEZ around it. Che Det knows all about Botak's connivance to sell massive amounts of Johore sand to Singapore for their land reclamation works which has been a persistent point of contention for Malaysia as it has resulted in coastline erosion in Johore Coast.

I am very sakit hati. Irresponsible, simply give stupid excuses and still become minister with all the privileges. Can tai chi some more ma...how disgusting, woi........I am so geram as a Muslim I can't find the justification to what they are doing to our friends now. really gerammmm la....RELEASE ISA DETAINEES, NOW.

zorro, hope to see your report soon on the vigil at blog house.

oh and someone should start petition to sack the home minister.

The streets aren't safe. Children have been kidnapped, raped & murdered. Women have been slashed, raped, burnt, limbs cut off.
So Syed Hamid, let's arrest all women and children under ISA. It's for their own protection.

very disturbing news on RPK from Haris latest posting.
damn, if it really happens, this murderer Al-Blur must be locked up and keys thrown away.

Syed Hamid is just a dimwit. The man is a coward. And his time is almost up. Once PR takes over, lets give this eunuch a fair trial.

sack the botak!!! my thought exactly.

i'll try to press it out and bring it to kelana jaya stadium today.

don't punish ourself because of others stupidity. let's get cheerful always.

When the Botak Yemeni speaks, his mouth is crooked. A crooked man with crooked thoughts speaks with a crooked mouth!

This Yemeni in disguised as a Malaysian is a traitor to the people of Malaysia!

Botak, botak, botak, to arrest non violent critics of your govt under ISA, is the lowest act of a despicable scum like you. We the rakyat, hold you responsible for all the evil acts that you have dished out on innocent civilians. As a Home Minister, you have shit all over your filthy ass.
You will never, I repeat, you will never beat the human spirit!
Have you seen the candles burning, more will join in.

Bernard, this unnecessary job posting called the Home Ministry seems to be reserved for the stupidest dumkoft in Umno. First we had that terrible Maidin mamak fella and now this arab-camel crossbreed. Albar is like a bull in a china shop. Everywhere he goes things get messed up. When in the Foreign Ministry, cant even defend a piece of rock against a tiny red dot.

For me Syed Hamid looks kind of like the former Iraqi Information Minister under Saddam. Check out the links:

I always suspect that ants are extremely strong for their size.

The ant in the poster just confirms it, that they are able to counter the full force of the ISA.

Way to go, little man, way to go. May the force be with you. The evil Empire will surely fall soon.

I think we should have a Facebook of Shame containing faces of those who brought shame to this country.

The Muslim Consumers Association of Malaysia, Heritage Associations, Malay Cultural Organisations and Related Bodies Cooperation Network yesterday lodged police reports against Teresa Kok over her "alleged act" to prohibit the azan call. As a social and cultural associations, they should show to the general public that they are run by good intellectuals who can provide good examples on righteousness, fairness and integrity. To make such police reports after the fact that the Masjid had denied the involvement of Teresa Kok on the azan issue, the confirmation by the residence association that Teresa Kok did not initiate any petition and that the blogger at the Pembelamelayu Blog has appologized on the mistaken allegations made by him, it makes onwe wonder what is the motive of such police reports now! It has been told that Islam forbids slander against anyone. So in this holy month, why are such actions taking place against the truth and supporting lies by these muslim associatios?

Botak has really overtaken Nazri in terms of being the talkcock King of the gomen.... one subject i love whacking =]

it was a good Vigil last nite... c u 2nite at Kelana Jaya.

Just read on Haris' blog that RPK maybe up to his old tricks of hunger stricke again & in danger...

my questions:
i dun mean to question Haris'source.

But is he/she reliable in terms of impartiality? Is he/she trying to catalyse DSAI to move sooner than he should? or worse, an agent to create the uproar BN wants but still cannot ignite from the arrests??

OF coz, if he/she's words are true to the fact.... then something MUST be done quick! may it be PR taking over or get Marina & the legal team in quick to save RPK's life!!!!

Zorro... pls take care of yourself out there too... i'm suspecious of the "generous" police permit given to tonite's gathering...

Just read on Haris' blog that RPK maybe up to his old tricks of hunger stricke again & in danger...

my questions:
i dun mean to question Haris'source.

But is he/she reliable in terms of impartiality? Is he/she trying to catalyse DSAI to move sooner than he should? or worse, an agent to create the uproar BN wants but still cannot ignite from the arrests??

OF coz, if he/she's words are true to the fact.... then something MUST be done quick! may it be PR taking over or get Marina & the legal team in quick to save RPK's life!!!!

Zorro... pls take care of yourself out there too... i'm suspecious of the "generous" police permit given to tonite's gathering...

its election year for UMNO. There is competition to be noticed. only problem, the competition is not for competence. Its like the winner will go to the most moronic candidate with the least grey matter. sigh, these are the same people running the country.

Hi zorro,
Fantastic insight into this yemeni camel aka Syed Al Blurr. Coming to think of it the most hated man tag might fit another cross-breed called mamak, the crafty old goat.

This dickhead is just trying to score some brownie points by using the ISA at his whims and fancies to show he is as good as the old goat known for his insidious hand in the Ops Lalang.

This idiot can't even stand the de facto law minister, Zaid Ibrahim for taking a stand against the ISA.
At least Zaid has the decency as a human being to admit that the use of ISA on civilians is wrong.

ISA was MEANT FOR TERRORISTS.

The old goat saw terrorists in all the Opposition and NGOs when he felt his authoritarian rule was slipping.

This dumbo sees national security risks in mere civilians and leaders who speak out against the atrocities of the ruling Barisan Neraka.

Mr.Al Blurr's day of reckoning is near. He could also be taken in by a bunch of blaclava clad goons for his protection.

breaking news: zaid ibrahim quits. there goes the judicial reforms. Looks like the rightist in UMNO is taking centre stage.
With mahatir orchestrating behind the scenes, it looks like back to the dark days of tyranny. Civil society will be suppressed. here it comes again 1987.

The Botak. What a moron!