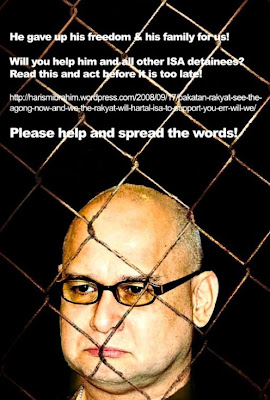 pics from Bodohland
OK gang, we have done what we can within our means for RPK and Teresa.....vigils.....pressing for family visits.....pushing for their access to their legal aides.
There is one more thing we can do.
Support the Centre For Policiy Initiative's
PETITION TO FREE THESE TWO BLOGGERS AND ALL ISA DETAINEES.

If this petition draws anything less than 50 thousand signatures, it would be a real pity. All those who visited MT, or at least those who post comments regularly MUST SIGN this one. At least 20k by the end of the week go else go hide in the toilet.

We wouldn't worry as much if Pete were 20 years younger, but not at this age which is compounded with a medical ailment. I don't know what else to say except to wish PR godspeed in replacing the present government. This is the only and fastest way Pete, Teresa and the rest can get out of detention.

I did my part the moment i saw it posted . I calls on the people and all netizens to do their duty, please sign it.

If bloggers like RPK and Kickdefella can be detained under the ISA, why isn't TDM who has been vociferous in his attempts to kick out AAB arrested under the ISA?

If fact TDM has all along been inciting racial discord among the various races by trying to pit one against the other in the name of ketuanan melayu and affirmative action. Despite his age, he should be locked up and held incommunicado to stop him causing further damage.

FYI I have already signed the petition.

This is where BN lost the faith and trust amongst the voters, being seen to be un-fair and biased, selective in prosecuting and pressing charges.

do not do what you dont want others to do unto you.
ISA is a bad law. Repeal this law and bury it 6 feet underground for good.
As long as this law is still around, it will be abused and manipulated to keep tyrants and despots in power.

For those who said they care for Malaysia, please sign in on the petition.

Done brother... We need to pile the pressure...

also received your sms earlier and no worries, just stay safe and may the good LORD keep watching over you.

I have send out a note to all my comrades within the globe to support this.

C'mon, every true Rakyat must sign faster, are you afraid of ISA too ? how many of us The Rakyat can they 'ISA' ? Time is not on our side to think too long.

I posted this on Kerp's blog, and he told me to forward it to other blogs. here it is:

I have send this out to my comrades within the globe and lets keep on with the pressure.

The good LORD is watching and will grant us the peace that we are wishing, praying for. The end is near at hand and RPKs freedom is near sighted.

There is another petition for ISA detainees where the petition had gained by more than 30,000 signatures :

Sheih is out too !
RPK's life is lagi under threat so we have to protect him from those xxxxputras lah...dun bimbang ,ok !