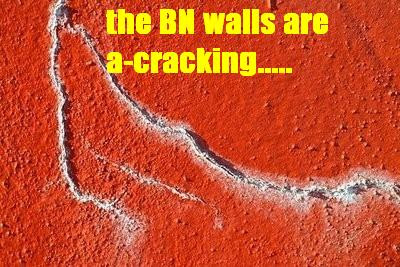 DR TAN KEE KWONG the son of the illustrious late Tan Sri Datuk Tan Chee Khoon, has joined PKR.He was the former Segambut Member of Parliament and was also the FT Gerakan chief. He cited loss of faith in Barison as his reason for moving out.

"I joined PKR because I believe it is the party of the future and that Datuk Seri Anwar Ibrahim is leading the charge to make Malaysia a better country.," he is reported to have announced

But where are the MPs that are supposed to jump?

UMNO cross-over will start on sep 8th and gerakan, MIC and MCA will start the ball rolling....some of my UMNO friends are already desserting UMNO in large groups...real bad news in Negeri Sembilan. NS UMNO is going to collapse soon in the next few days!!!

maybe all these are planned that the captain leave last?

aisay! I don't remember why I liked the late Tan Chee Khoon but he was a good guy..yes?

I hope this young Tan is like the old Tan I liked.

There are SOME people who are totally NOT their dads.

Myself awreddy takut of those scions of big guys - or is it scions of scorpions?

Please leave UMNO for the sake of Malaysia..
May God bless Malaysia.

Is Dr Tan, a chip of the old block?
I have the highest respect for his late father DS Tan Chee Khoon. A very independent minded and a man of high integrity...loved by both sides of the political fence.
Dr Tan will be a good man to have in PK. It is indeed pleasing to see the right people, moving over to the opposition, welcome on board.
If this is a sign of more memebers from component parties bailing out and joining PKR, it will simply be wonderful.

It is not about what is right or wrong
It is about the country’s future that counts
MPs in BN make your choice………….
Serve the right leader to flourish the nation

Knowing how hard the people try to save
Increasing costs eating into their pockets
Yet we read about BN MPs going for field trip
Without plan and schedules…………
Just thought about it and decided to go
This is BN for us to follow?

They don’t know what’s happening
One still talks about ISA RPK
When face to face engagement should be right forum
Open the doors let us entertain each other
About policies, laws, economics, transparency, accountability

BN MPs where are your stand?
On the sinking ship you will have no place to go
Else go to the people choice at least you can live
On the dry ground living free
It is on your move else don’t cry when it arrives

Wow! This is bloody exciting how the events are unfolding.

I still won't allow myself to believe 916 is actually going to happen. I just can't. I can't bear the disappointment if 916 fails.

While the BN walls are a crackin, one dropout's arse is constricted with fear. Imagine him wetting himself while watching Anwar being sworn in. I think this is one 'swearing' that will haunt him till they close the cell door on him.

So what if DSAI becomes the next PM? On reflection, it might not be a bad thing for the 23 year old salad tosser. Afterall, being caught between-a-cock-and-a-hard-embrace by burly inmates is estacy of the highest swearing order.

In life do whatever is deemed right
In action do whatever is necessary
Do them all while the sun is still bright
Do them properly without having to say 'Sorry!'

Yes,leap frog leap.
Yes,jump frog jump.
Yes,lets do it now.
But make sure u r no
Ahmad or Zulkifli!!

quality people are leaving BN and coming to the 'party that cares'.

A year ago or so I sent Dr Tan an e-mail telling him to cross over then. I told him why his continued stay with any BN parties was untenable. Wonder if he read it though.

"UMNO cross-over will start on sep 8th and gerakan, MIC and MCA will start the ball rolling....some of my UMNO friends are already desserting UMNO in large groups...real bad news in Negeri Sembilan. NS UMNO is going to collapse soon in the next few days!!!"

Anything for a better Malaysia, but BN won't be part of it. They @#$% up big time.

But one sparrow does not make Spring. Where are the others?


Well done !
It's always not too late to have a change or correct oneselffrom worst to good.

RAKYAT the Power of Nation

It's yourself and your men who seriously cracked "the Giant Wall of Umno-BN", so be gentlemen and time to let us (anak-anak bangsa Malaysia)to do the thinking.

Millions times of sorry to you again, Mr Prime Minister of Malaysia.

SO YOU AND YOUR MEN ARE OUT NOW.
"GULUNG" ALL YOUR "TIKAR" AND GO !


RAKYAT the Power of Nation

TNS says....
Victorians are all proud of your decision, Dr Tan KK. We will all support you!

TNS....Najib and Hishamudin soiled the corridors of St. Johns, luckily for a spell, I beleive.

In the I-Ching, the ancient Chinese book of divination, there is a hexagram called "Revolution". In a revolution, it says "Two mistakes must be avoided. You must not move with excessive haste nor use excessive ruthlessness against the people. What is done must be corresponds to higher truth. A revolution not founded on inner truth will come to a grief. For in the end, the people will support only what they feel in their heart to be just".
This is the meaning of the mandate of heaven.

If I'm one of the MP, why should I join a government with a very, very small majority? 1 or 2 i think.

Its a weak government in the first place.
And what will they get? something better from those already in PR? Tough luck!!

Might as well stay put in the government with a comfortable majority.

Care for some hot starbuck's?