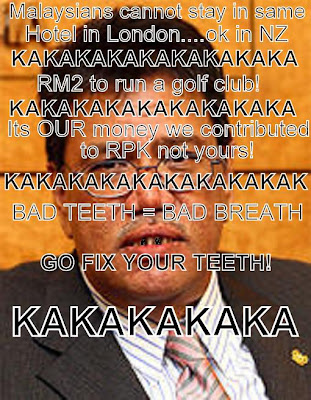 ADVISE YOU CLICK ON PIC TO SEE EXTENT OF DAMAGE
BY BLOWING TOO MUCH HOT AIR.
Posted by zorro at 9:25 PM 11 comments:

BETRAYAL - A HEINOUS CRIME AGAINST YOUR OWN PEOPLE.

"Tribal leaders are the government's agents in developing local communities and are not supposed to go against the government," said Sarawak Infrastructure Development and Communication Minister Michael Manyin, at a ceremony to present appointment letters to Bidayuh and Melayu Temenggong (paramount leader) of Samarahan.

He warned that any tribal leader who supports the opposition in the next Sarawak state election will face immediate termination of service as the action is a very serious misconduct.

Manyin said as the state election would be held soon, tribal leaders should enhance their efforts to assist the government by disseminating information about the success of the state government in bringing development to the people in the remote areas.

"To improve the government's delivery system, the state government wants tribal leaders to be open-minded in accepting criticism and suggestions," he said.

This early warning was made at a ceremony to present appointment letters to Bidayuh and Melayu Temenggong (paramount leader) of Samarahan, here today. 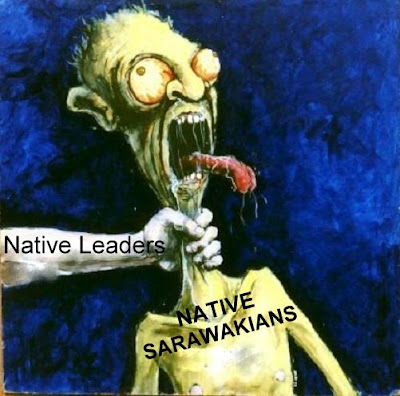 "No voting or election is needed in appointing a new tribal leader as he will be appointed according to the approval given by the district officer, division resident and state secretary," warned this demagogue.

Keruah Usit HERE said that these demagogues of all stripes in Sarawak have encouraged divisive ethnic politics since the formation of Malaysia in 1963. They have prospered through political patronage and a strategy of playing off one ethnic group against another.

I learnt this from a source who was in 1969 assigned to Kuching on active service with the Armed Forces. At the then biggest hotel in Kuching the Aurora, a young Leo Moggie who was then an executive in the Borneo Book Company pointedly told this young serviceman over drinks that they East Malaysians were being COLONISED by West Malaysia. As a young officer on duty this young man offered no reply to this accusation.

The next time this same officer met the East Malaysian was at the Lake Club locker room. The Book Company execitive had of course risen to be a Federal Minister of Malaysia. I believe there is a word for this: STOOGE, no?

Then there was this maverick officer who took no nonsense even from his superiors. As an honorable soldier he left the service. Years later, he was recalled to help the Government to seek out Bruno Mansel, the champions of the Penans. He accepted the assignment, but word has it that he joined the Penans in their struggle. I believe too there is a word for this: BraveHeart.....can?

Motto of the famed Sarawak Rangers