TERESA RELEASED, WHO NEXT? 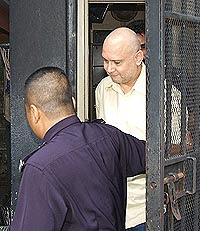 TERESA KOK has been released. This is welcome news but we still have one brother blogger IN. Are they still trying to break Pete. Are they trying very hard to convert him to be a better muslim. Hantu informs me that his interrogators at one stage could not continue to debate him because he outclassed them on the Koran and the Hadith.

rpk never gets angry
he gets even.

Let's none of us play God. If Pete is a sad representation of what Islam should be, let God be the Judge. Should any of the interrogators play God, God besides getting angry HE can also get EVEN. Just a WARNING....GOD'S WAYS ARE ALWAY WONDERFUL.....MAN PROPOSES GOD DISPOSES....even in this holy month of Ramadan.

RELEASE RPK AND LET'S ALL HAVE A GOOD RAYA.

POSTED FRIDAY 19 SEPT. 1:57PM
(MY SITE IS NOT REGISTERING CORRECT DATE AND TIME OF POSTING SINCE LAST NIGHT)
Posted by zorro at 10:37 PM

one piece of good news. petition hard to get RPK out next, the hindraf 5 and the rest.
after that, petition hard again to rid off ISA! May Zaid Ibrahim join us in this endeavour.

Let GOD be the judge..That's true because what he was done before is between him and GOD but how about between human (Muslim)? His article was 'menghina Islam' was too much.. Kita ada maruah sebagai orang Islam...But anyway, as a human, I was pity at him because all Muslims will celebrate Hari Raya just a week from now. Maybe his family is waiting for him for Hari Raya...

It appears that alternative views cannot be discussed and will not be tolerated by the current regime. That seems to me to be RPK's crime: to encourage alternative views and discussion thereof. Is that a threat to internal security?

Let's Fast and Pray for RPK to be released latest next week, earliest tomorrow Saturday.

I have faith in 'Mandate from Heaven This Nation awaits'.

I sincerely believed RPK must be returned to his wife and children for breaking of Fast Saturday evening.

My salute to all Peacemakers.

Zorro,
Where can we send RPK and Pn Marina a Hari Raya card and also express our support for him?
Perhaps you can organise a support card campaign and have the cards delivered to Pn Marina or RPK or even to display them in public.....at least this is more visible than support in the blogs.
Or perhaps a yellow ribbon campaign????
I'm really worried about RPK.

Tribute posters to Teresa's freedom - hopefully RPK will be next!

POST RPK ADDRESS ON YOU BLOG OR MT.WE WANT TO SENT HIM AND HIS FAMILY CARDS AND PRESENTS FOR RAYA.

Let us do our act every night to get RPK out. He has to be released before Raya. Can't we organize nightly candle light vigils especially after the Terawih prayers? Every mosque should start this vigil.

I pray that RPK will be released soon. It is heart-breaking that he is in his current state. He does not deserve it at all.

RPK, the people will always be with you. Stay strong!

aiyah ! his life is still under threat lah !
sheish is out oredi !!

JOHOR BARU : The Internal Security Act will not be reviewed or repealed for now, said Home Minister Datuk Syed Hamid Albar. He Said such preventive laws still needed for the people to live in peace and security.
- What he meant to say is that ‘People” ie corrupt politician and cronies need ISA to protect their interest. RPK as a dutiful Malaysian revealing corruptions and incompetence of the government is being detained under ISA however at no time did RPK incite violence or create a national security incident. Therefore the “people” Home Minister is referring to, must be the corrupt politician and cronies that need ISA for peace and security.
However, he said a review could take place “when the time was right”
- What he meant was that at present the government do not have answers to the many corruptions and injustice that were revealed by RPK. Therefore the time is not right.
Asked about various ministers speaking out against the Act, he said they were entitled to their “own views”
- What he meant was that although Malaysia is a democratic country, UMNO has the final say. UMNO can do what they like and when they like. The voice of the rakyat and their elected MPs are irrelevant.
So there you have it…… his statement can only be logical in the above context.