WHO COULD HAVE GIVEN THE ORDERS? 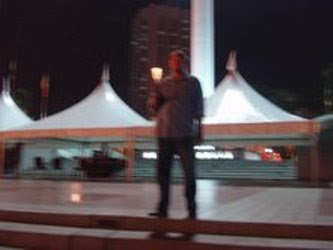 Haris had rushed thru his chicken a la king at the Press Club, told the Yew Brothers, Wilson and Tony and I not to rush and lumbered off with : See you guys under the flagpole.

Picture above was snapped by Gus Gan of Fisherman's Wharf. Haris was holding his lighted candle. This was his dangerous weapon. It has got to be a weapon of massive distraction, otherwise the police would not have mobilised in force 5:1. Doesn't this leave an awful taste in the mouth.....the full force of the law against candle-bearing citizens? Read here Haris brief visit to the Dang Wangi Pondok. Of course I laughed at the cops who when asked told me that it was not allowed to have candles. They had formed a grid-lock and it was not possible to hold the candlelight vigil. An officer barked at some cops manning the barricade pointing at Wilson who was filming. In Bahasa it sounded like: Why are you all standing here like KAYU, bring him (Wilson) here. Wilson surrendered his MyKad, volunteered that he was just filming an event. Wilson was ordered to move away and I believe he went back to the NPC.After which the officer asked what I was doing at the barricade. When I told him that I was here for the candlelight vigil he ordered me onto the street, away from the foot of the flagpole. There I witnessed an officer shouting, yes shouting menacingly at a tall Indian man: "Don't stand here." When the gentleman did not move, the loud cop said: "You want to be a hero." He ordered his men to arrest the gentleman who climbed onto the black maria. Two down. Later, I received an sms that a young couple too was "taken", Four down. I met up with Yati and 20cents of KL Confidential. It was then that YewTube Tony called to say that Haris has been released and was heading back to the NPC. We crossed the road and was escorted by two mata-mata to the Royal Selangor Club where we met up with Marina. Candles were lit on the steel fence separating the club from the padang. That attracted the attention of of the cops who came into the club to ask that we extinguish the candles. Some members told the cops that this was private property and that they had every right to do what they wanted to do. However, the RSC security management went into a frenzy when the likes of Hishamudin Rais and Tian Chua joined us. Did I hear right when somebody said that PKR people were not allowed into the Club? I hope not! But I know that come the next day some snooty members will take umbrage that their exclusivity has been deflowered by rebels, like the likes of us riff-raffs. Sorry if we tainted your clinical-clean ambiance but the cause was a good one, if you can come off your high horse and appreciate the fact that a birthday song was sung. .But let me put on record that the GM Nathan defused any possible fracas admirably. The General Committee should appreciate this.

BUT I STILL WONDER WHO WOULD HAVE GIVEN THIS ORDER THAT THERE SHOULD BE NO CANDLE-LIGHT VIGIL TO PRICK SOME CONSCEINCE.
Posted by zorro at 6:26 PM

Oh come on, Zorro. I think you are abit harsh on the RS Clubbers.

"Some members told the cops that this was private property and that they had every right to do what they wanted to do." Really? Clubs have rules for their members who just can't behave as they please, else they will be hauled up before a Disciplinary Committee and possibly sacked. What if some members started a bonfire on the lawn? Last I heard, the club was burnt down some years ago.

"Did I hear right when somebody said that PKR people were not allowed into the Club? I hope not! But I know that come the next day some snooty members will take umbrage that their exclusivity has been deflowered by rebels, like the likes of us riff-raffs." Yes you are right. Many club members are actually politicians too. Maybe Hish and Tian are not members so they just can't walk into a private club, a private property unless a member signs them in. It's like the public just can't walk into your NPC and create a ruckus there, or can they? I think what was meant then was that politicians just can't bring political events into a non-political club. No ceramahs allowed, you understand. Its not in the rule book. As for "snooty members" and "exclusivity", hahahahaha, good one El Zorro. First time I am hearing these words about RSC members who are well known for their bar fights, shenanigans and the like in that Wild West Saloon. You saw their long lists of "persona non grata" people?

"....but the cause was a good one, if you can come off your high horse and appreciate the fact that a birthday song was sung." It may be a good cause but I am sure the club would like you riff-raffs (your words, not mine) celebrate the birthday elsewhere like in St Mary's Cathedral next door, Bank Negara premises, in front of CIMB Bank or even at the warong "down by the riverside".

"But let me put on record that the GM Nathan defused any possible fracas admirably. The General Committee should appreciate this." That was what he was employed for as he has the "credentials", I am sure, and backed by 20 Gurkha guards that he had behind him. Good job nevertheless. (Now he wants hazard pay).

Anyway next time you want to hold candlelight vigils, come to Chow Kit Territory. My "gals", sorry "boys", sorry "men", whatever, will give you all the backup you need. Besides, they do like contact sports.

Cowboy,we were invited, we signed and those who did not, signed later. Hish and Tian were also invited. The club members have every right to protect their turf. We are aware of this and it was a member who put up the lighted candles, with our help. We were not rowdy. It would have been like all normal nights until the police officer butted in uninvited.

As to your suggestion that we next hold any candllight vigil in your territory, I think you take us too lightly. Might I add, that we are not into contact sports which on occasions like this smacks of frivolity. It will be good if your gals,boys,men come join us for good causes like this one. Not a challenge to a gun-fight at high-noon, dear friend....just a simple gesture to seek understanding for what we try to do. Comprende muchacho?

I'm not sure whether you are aware or not, that the man who ordered Haris to be taken is that ACP Zulkarnain Rahman: the man who famously rejected the 'BERSIH' permit and secondly, rudely stopped the Anwar Ibrahim speech on Black 14. Our 'ACP' was too high and mighty and was bullying a few people besides Haris...and I felt that this guy should be moved somewhere else!

Assholes cops working for a few big asshOles sitting high up at Putrajaya!
These guys are really getting up my nerves!
Dont these cops understand that their job is to protect citizens likes us and not acting like gangsters?
I am really dissapointed with all the happenings these days after the election.
They are really acting like some shit hole with all the intimidation and bully tactics, and look at some of the real stoopid comments and suggestions coming from putrajaya.
Do they really think that we the people who are their Master and them the servants are dumb or idiots?

aisay! And I was thinking you light candles in Masses and for rememberance no?

Can not say you are catholic meh?

Can also say my friend in 1962 mati here today his anniversary mah!

You know bernard..I am ever so sorry I can't be there. I would be!

Next time burn 2 candles; 1 on my behalf.