PRAY GOOD PEOPLE, HELP ME OUT WITH SEDITION! 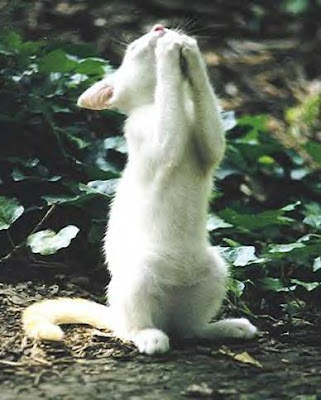 PLEASE GOD, HELP ME TO UNDERSTAND THIS WORD THAT CAN SHUT EVERYBODY UP. 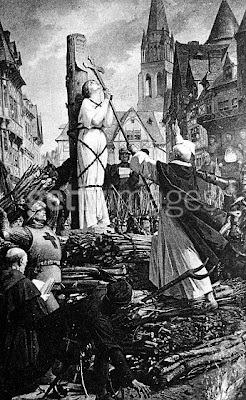 Rouen, France, 24th May 1431, French patriot and martyr Joan of Arc (Maid of Orleans) is tied to stake in the market place of Rouen to be burnt after being found guilty of religious and political sedition, She had claimed that she had heard the voices of St, Michael, St, Catherine and St, Margaret bidding her rescue Paris from English domination in the Hundred Years War 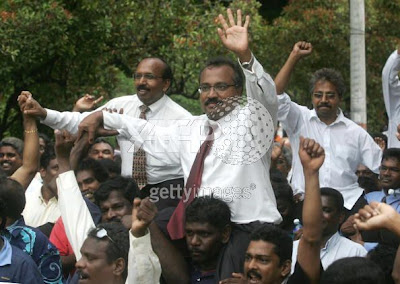 P.Uthayakumar, (C) Hindu Rights Action Force chairman, P. Waytha Moorthy (R) and V. Ganapathy Rao (L) are lifted up by their supporters after being freed from a court in Klang, outside , 26 November 2007. Ethnic Indian activist claimed a victory in their anti-discrimination campaign as a court dropped sedition charges, a day after a mass rally was broken with tear gas and water cannons. But there was another tense standoff with security forces as around 1,000 supporters followed three freed leaders of the protest, which highlighted the tense race relations in this multicultural nation, after the court ruling. However, these three and two others are now incarcerated in the infamous Kamuntung Camp for alleged involvement with terrorists. The government could not prove this but found it more convenient to lock them up. One, Manoharan, was offered as a candidate and won the recent elections. He is not allowed to participate in the State Assembly. It is a known fact that HINDRAF was primarily responsible for swinging the majority of the Indian votes to the opposition. They had to be punished and what better way than an indefinite sojourn in Kem Kamunting. 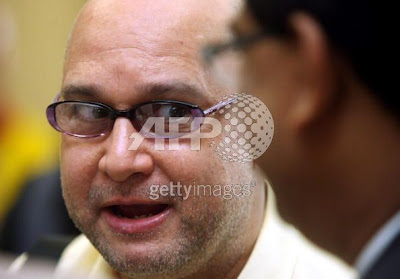 's top political blogger Raja Petra Kamaruddin, talks to a friend as he arrives at the courthouse on May 6, 2008. Kamaruddin was charged for sedition over an article about the murder of a Mongalian woman. The murder trial is currently dragging along and becoming a big judicial Y A W N. One of the accused even shouted at Raja Petra who was remanded for refusing to post bail, to watch his back. As such prison authorities "begged" RPK to allow his wife to post bail, as they could not guarantee his safe stay at the Sungei Boloh Penitentiary. That's how safe this country is. 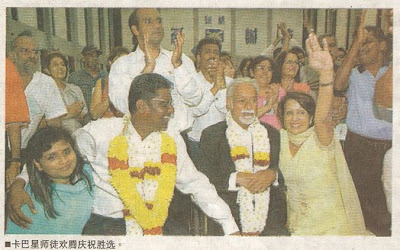 Police are interviewing reporters who covered Bukit Gelugor MP Karpal Singh over his statement allegedly questioning the power of the Sultan of Perak.

“All reporters who interviewed him (Karpal Singh) will have their statements recorded. I can’t reveal off-hand how many reporters will be interviewed,” he said.

He expected the investigation to be completed soon.

“We will hand over our investigation paper to the Attorney-General in two or three days,” he told reporters after launching a new marine police beat base at Banding island in Tasik Temenggor near here yesterday.

Karpal Singh was alleged to have said that the Sultan of Perak had no jurisdiction over the transfer of Datuk Jamry Sury from the Perak Religious Department. 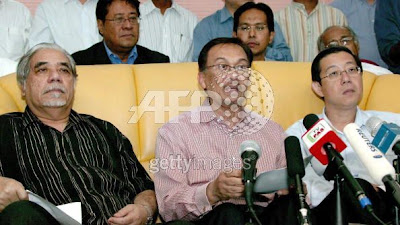 Former Malaysian deputy prime minister Anwar Ibrahim (C), flanked by opposition party figures Mustafa Ali (L) of the Pan-Malaysian Islamic Party (PAS) and Lim Guan Eng (R) of the Democratic Action Party (DAP), addresses journalists during a joint press conference by opposition parties in Kuala Lumpur, 12 December 2007. 's opposition parties on 12 December demanded crisis talks with Prime Minister Abdullah Ahmad Badawi over a crackdown on dissent triggered by mass protests. Dozens of protesters, including opposition figures, have been arrested and slapped with charges including attempted murder and sedition after a series of banned street rallies that have infuriated the government.

However, this grouping, now formally called Pakatan Rakyat (People's Alliance) has won five states and prevented the Barisan Nasional of its previously comfortable two-third majority. Anwar claims that he has the numbers to topple the government, if and when BN component parties, already miffed by UMNO's intransigence and arrogance, have hinted of crossing over. If this can happen, it is good riddance to the Barisan Nasional who are already exhibiting signs of dottage.There would be no element of sedition when the BN is toppled. 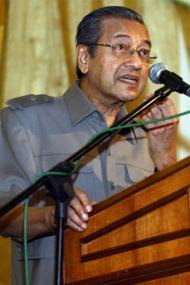 Former Prime Minister, Tun Dr Mahatir Mohamad is reliving the days when Australian PM Paul Keating labelled him RECALCITRANT. In an unprecedented move he resigned from UMNO hoping for a seismic rattle that would see hordes following him out of UMNO. The NST front-paged that TDM obsession with toppling Prime Minister Datuk Seri Abdullah Ahmad Badawi might back-fire. If you want to bring down an elected government, does this smack of mutiny and a whiff of treason. I really dont know. People, pray tell me.Meantime I pray and wait for some sane answers. I hate it when people tell me that we are living in interesting times. Damn, we are living in trouble times.Join me in prayers for answers.

If anyone thinks that these are 'interesting times' that person/s must be sadly blinkered.

If anyone thinks we are facing 'trying times' that person/s must be either a battle worn soldier or having too much wool over his or her eyes.

With oil price hitting USD135 per barrel plus price of essential goods rising without announcement -- including rice, we are hitting the pits with so much of muck hitting the high-speed ceiling fan of local politics.

Well done, Sir !!! In five sections you have summarised the current events in Malaysia for the last few months ! Very well summarised.
Now, we can only wait for developments that will lead to the better. God Willing.
Shalom Peace !
Anak Selangor

When we are older, we can tell our granchildren of our turbulent times. We can also tell them how we changed Malaysia to be a better place and the things that certain corrupt people did to destroy Malaysia.

Do they need SEDITION, ISA, OSA? not if nincompoop leader has the abilities...

to show CURIOSITY – if he never steps outside his comfort zone to hear different ideas, he grows stale.

to be CREATIVE – ya know, think outside the box.

to COMMUNICATE – not about running off at the mouth or spouting sound bites, it about facing reality & telling the truth even when its painful.

to be a person of CHARACTER – knowing the difference between right & wrong and having the guts to do the right things. A man of character does not ask any citizen to sacrifice for a failed policy.

to display COURAGE – is about having the commitment to sit down at the negotiating table and talk. Swagger isn't courage and neither is tough talk.

to show CONVICTION – got to have passion, a fire in his belly. got to have the burning desire to get something done.

to be COMPETENT – has to be a problem solver. got to know what he is doing and more importantly got to surround himself with people who know what they're doing.

have COMMON SENSE – what got him going is the ability to reason & common sense. if he don't know a dip of horseshit from a dip of vanilla ice cream, he'll never make it.

It not too late but its getting pretty close. So let's shake off the horseshit and go to work. LET'S TELL 'EM ALL WE'VE HAD ENOUGH!

“EXCERPT FROM LEE IACOCCA'S -
WHERE HAVE ALL THE LEADERS GONE?”

Lets forget politics for awhile and look at the evolution of mankind.

This is a trying times for all, with possible world economy downturn, rising prices, political instability (no thanks to Dr M), and the Federal Politiking by UMNO, i HOPED that Pakatan Rakyat stick steadfastly to propping up the economy, and with good governance, we will see Pakatan Rakyat to be forming the next FEDERAL GOV'T.

We are indeed living in DANGEROUS times.What with an ex. PM ranting and raving playing the race card, without
a care for our country!We are not living in feudal times in Tanah Melayu.We are living in 21st Century Multiracial Malaysia!

"May you live in interesting times" is NOT to be taken literally!
Figuratively, it is a sort of "curse" on the recipient that he will face many problems, all sorts of troubles, ahead, be it dangerous, challenging or even 'near' fatal.
mGf, may you (and RPK!2) come back to UNinteresting times!--Desi