THE CHEEK OF NUJ! WHERE IS AHMAD SHABERY CHEEK? 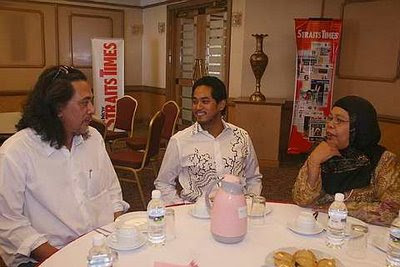 I'm always a supporter of the National Union of Journalists, so when its president Norela asked me last week to become a panelist at its World Press Freedom Day forum at the NST this morning, I said yes. The NUJ forgot to inform me that Khairy Jamaluddin agreed to officiate at the forum.

Pray will somebody out there elucidate the meaning of the word "officiate". My little pocket defines it thus: act in official capacity; perform divine service.

The latter does not apply, but you never know because this country has given divine status to selective graduates from this Oxford, NO? But the former definition does smack of patronage. Is the NUJ who have been reticent over many issues since the People's Parliament initiated its Hartal/No Buy No Lies initiative, finally having recourse to divine intervention to justify its existence? Silence is sometimes a discretion, but dumbness seems a self-imposed disability. There was not even a squeak when the Sedition Act was slapped on a blogger and a writer! As such and especially around this time of the year, freedom of the press season, a re-reading of the Code of Ethics is a good exercise. Of course Bloggers do not come under the aegis of this code, but we embracing it , at least I want to.

Respect for truth and for the right of the public to truth is the first duty of the journalists.

To defend the freedom of the Press, to deal with the professional conduct of its members and to maintain high ethical standards in journalism.

1.In pursuance of this duty he will defend the twin principles: freedom in the honest collection and publications of news; and the right of fair comment and criticism.

2.The journalist reports only in accordance with the facts of which he knows the origin. He will not suppress essential information of falsify documents.

3.He will use only fair methods to obtain news, photographs and documents.

4.Any published information which is found to be harmfully inaccurate he will do his utmost to rectify.

5.He will observe professional secret regarding the source of information obtained in confidence.

6.He recognises in professional matters, the jurisdiction of his colleagues only; he excludes every kind of interference by governments or others.

7.He will regard as grave professional offences the following:

- The acceptance of a bribe in any form in consideration of either publication or suppression.

8.He recognises in professional matters, the jurisdiction of his colleagues only; he excludes every kind of interference by governments or others.

Rocky, still in orgasmic paroxysm brought about by the promotion of Stoke City to the EPL, might have forgotten to inform us of this forum. We would have enjoyed this…..unless it was a closed forum ….not even open to the Minister of Information whose presence was inconspicuously conspicuous.

As for the SIL, I believe a PKR MP called it 'ketuanan menantu'.

Seriously, SIL? Come on, that beruk doesn't respect the truth coming from anyone, even himself.

Yes, I understand that bloggers can't be considered the Press, but if the SIL can't respect the voice of the individual, how the hell is he supposed to respect the power of the Press?

Bad choice, NUJ. You fellows should pull you assorted heads out of some politician's ass and start standing for something.