WOW! VERY MACHO....BUT MUST HAVE SPUNK YOU KNOW. 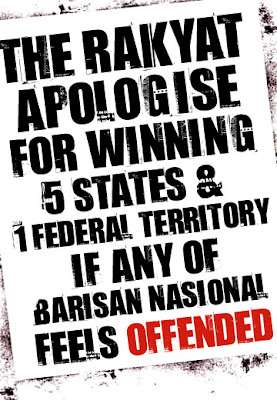 The following was reported shortly after the rude awakening post 8 March:

"All candidates must have blogs," Abdul Rahman told The Associated Press. "If not, they are not qualified to be leaders."

In the past, party politicians have said bloggers spread lies and rumors. Many of 's blogs contain commentary critical of the government.

But now, even youth deputy Khairy Jamaluddin — who once compared bloggers to monkeys living by the law of the jungle — has a blog.

"The last election showed that we lost the cyberwar. We need to embrace the technology now," Abdul Rahman said.

He said help will be available for party members who do not know how to create a blog.

The Deputy Prime Minister has awakened to the fact that engagement is better than harassment, but he still hasn't got it yet: read his utterings and my comments in bold italics.

The Government had not been savvy in engaging the new media and lost out in cyberspace, he said, "This was one of the factors that led to us having a worse than expected performance. But we live and learn. Being silent is not an option anymore and we have to address the issues raised."(You were not silent actually unless you were not aware.That macho lady minister unleashed her measly-paid cyber-troopers onto bloggers.But Assalina's darlings went on a sniping spree instead of intelligent engagement.Their poor command of English gave them away!)

He in fact has started the ball rolling by putting a reply through his press secretary Datuk Tengku Sariffuddin Tengku Ahmad to a posting on Malaysia Today, a news portal run by Raja Petra Kamaruddin. (aha...this is a no-no....don't delegate, don't empower important communications to your machais.....you want to say something ....it must be from the heart....your own heart...unless you believe that Raja Petra and us are not in your league to give personal replies to.....bloggers are credible when they write FROM THE HEART.)

“We need to have people who are active participants of the new media, who are sympathetic and understanding of the government’s position. (we are sympathetic and understanding IF THE GOVERNMENT'S POSITION IS TRANSPARENT, ACCOUNTABLE AND FAIR....these are traits the BN government lacks pathetically....liberally throwing the Sedition Act, OSA and your full arsenal isn't engaging....the man in the street calls this BULLYING.)

“Therefore, instead of just criticising them (the new media) or running them down, the best thing to do is to engage them. Hopefully they will understand our perspective,” he added. (its ok to criticise us if we stray, but do it professionally. Takes a bit of effort, of course, to be professional. LEADERSHIP IS ACTION AND NOT POSITION.

To another question, Najib said the Government gave the mainstream and new media a great deal of latitude to criticise.However, he said: “There is a line which shouldn’t be crossed” because it could undermine the wider interest of society. (Sir, it depends on where the LINE is drawn on a level playing field....if you draw the line on our defensive third, it cannot be fair.....if you throw sedition etc at us, can you be red-carded too if you throw seditious stuff at us (circa 1987?)....just think about that....that remark of yours did undermine the wider interest of society...to quote you. Aside: When you pit Stoke City against mighty MU at Old Trafford, it is called a bloodbath!...and the LINE has to be clearly drawn.)

“But when certain things he said constituted a very serious attack against the institution, the Attorney-General decided that he had crossed the line,” Najib said. (RPK said: Send Altantuya murderers to hell! Hell is what they deserve after we lynch them.Where else to send them? TO THE CONVENT OR OLD FOLKS HOME? The AG acted on whose INSISTENCE.....AND WHAT INSTITUTION ARE YOU REFERING TO....SDN BHD OR BERHAD? Sir, it is mouthings like this that get us bloggers on our goat....mehhhhhhhhhhhhhhh.)

Anyway, we welcome your troppers into blogosphere....the more the merrier.

1. Don't waste time. Ask someone to write for you (as you have only time to operate $$ printer).

2. Do NOT APOLOGISE for not doing yr own blog.

After all, you have been educated in our own fine world-class* institutions (*as rated by Malaysia for Msia)& essay-writing/debating/moral & ethics is not any part of your curriculum.

3. Keep only Positive feedbacks. Delete all other BS.

4. Thank your supporters when they angkat you
Ignore all other burgers!

5. Use blog to invite suporters to free satay parties thrown in your simple home. (bathrooms not an issue as you have 18 of them)

6. Use Blogs to advise People of Great things you have been doing such as
- cutting ribbons,
- networking at clubs & restaurants,
- giving ceramahs to raise funds, and
- building public facilities such as large car park and 18 bathrooms in yr simple house

Highly recommended Banner for your Blogsite:
"What is Mine is Mine.
What is Yours is also Mine.
What is Malaysia's is ALWAYS Mine"

They are their own worst enemies still in denial, on a “Self-destruct” mode, testing our intelligence - HOW INSULTING !!!

These are the desperados at the tail end of “Ketuanan Melayu” in the 21 century context being propelled by the powers-that-be, FEAR their imminent DEMISE by the Peoples’ voices, will resort to the SUBLIME !

Haven’t they done enough damage to this nation, its assets, its peaceloving but downtrodden citizens & insulted their own race & Islam ?????

Let us all MOVE ON, continue to work hand-in-hand to UNITE as MALAYSIANS to save our nation, its multi ethnic cultures/religion & its assets for every downtrodden MALAYSIAN citizen forthwith !

Give them enough rope to hang themselves at every turn….. we now sit back & watch more action.

May God show them the truth !

WHAT? WANT US TO BE SYMPHATHETIC AND UNDERSTANDING THEIR PERSPECTIVE... ?

WHAT A BUNCH OF BLARDY NINCOMPOOPS ( BN )!

Pathetic. Looks like they don't even know how and what to do vis-s-vis the bloggers!
In the first place if BN had been 'sympathetic and understanding' to the aspirations of the rakyat through a transparent and constructively critical MSM, bloggers who rave and rant against a just and fair government will not enjoy such a phenomenal loyal following and will simply vanish into cyberspace.
Instead t he MSM have been churning out propaganda to cover up the arrogance and the poor governance. We were further insulted when the Loyal Opposition was demonised and painted to look like traitors to the nation while the nation's rare resources were plundered with impunity by those in power.
The quality of these 'establishment' bloggers, both in content and language, leaves much to be desired. They are amateurish and brazenly idolise and glorify themselves like some third rate celebrity website. Another rush job just to join the bloggers bandwagon?
Execute the promises of GE11 and GE12 of a fair and corruption-free BN and you won't need blogs to defend the government. The rakyats are no bloody fools. They can choose what is right or wrong, from both BN and PR words and deeds.

I have always enjoy reading your blog and it certainly help me to think a bit deeper on what you blog about. I think it's a waste of your time to blog about this issue especially to those who does not even know what they are talking about. Get my drift?

Grateful for you inputs. It is a good initiative, this engagement. I try to look at the positive side of this move. I have said my piece and wish for the best for our people. Signs of engagement are already in place...media talking to bloggers in the press and on TV. However there seems very little depth in the engagement but for a start, lets give them some leeway. They never used to listen. They seem to want to now. For now, let us hope and pray that they are sincere.There is no better time than now to say thank you to you for posting your comments. Your ideas, your thoughts, your feedback are the fodder for whatever I post. I thank you and hope that this continued relationship will contribute to the betterment of things Malaysian. This country is a beautiful country because of its people....like it is the people who make the home and not the furniture and other accoutrements in the home. Thanks you again & peace.

zorro,
ditto to all your opinions in "bold italics" !
Cheers !Not thirsty ah ??

This DPM, whatever he says nowadays, no right-minded Malaysians give a damn. He has been tarred and feathered since his utterances in 1987 to bath his keris with Chinese blood. But why is the ISA not used on him then till today, pray tell me, whoever the-powers-that-be is.The more he talks, more shits are spewed!

Why "Grilled toyo" the former Selangor MB is still at large ??!!

He also mentioned that The PR government shouldn't be wasting too much time in digging his past wrong doings and misdeeds.
If we go by his logic that means all the criminals must be released from jail as their crimes were committed in the past.

Why the prisoners are still rotting away in the jail waiting for their trial.

Be fair and square.

Man, you sure talk like twin-turbo charged Mitsubishi Evolution X. Looks like Raja Petra has a new (friendly ) competitor in the Internet ... Maju lah Malayisa.

hsh (his serenbe higness?) emperorx...liked the sites after the post....try daily niner....u will like that. Cheers brother.

your higbnesss emperorx...dang I love the evo...drove friend's...but dont have the green back to own one. Driving one can give u the hard on. However, I am far behind my friend RPK. He is on a league of his own. Keep me humble ok buddy?