ONE IN THE PIC AIN'T A BLOGGER FOR SURE. 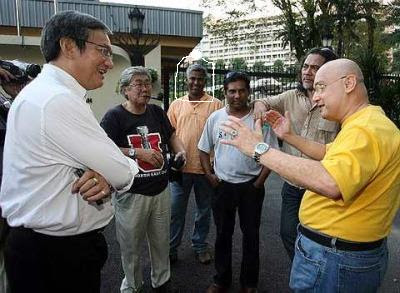 Blog support: Raja (right), talking to Wangsa Maju MP Wee Choo Keong outside the CCID after he was called in to be quizzed by the police yesterday over an article he posted on his website on April 25. Looking on are some of the bloggers who turned up at the CCID in support of Raja Petra.

The caption by Star was not correct. 5 bloggers were pictured but the guy (circled) between me and Shanghai Stephen I have not met in blogsphere and neither have my 5 friends. Earlier I had seen him mingling amongst the media people, so that was ok. I saw him next when Wee and Rocky tried to gain admittance into the Complex. I saw this same guy amongst the police personnel talking to Wee and Rocky. And now he is in the picture. WHO IS HE? RPK supporter? Agent? SB's planted twig? BN extra? No wonder Eric Voon ( I Am A Malaysian) kept saying he smelt something mangy.

People, do excuse us Bloggers when we go a little bit overboard and overly suspicious. Can't help it sometimes when we are picky....how do you expect us to react when some are targeted as easy pickings.....especially when it is not fruit picking season.

BREAKING NEWS 1: RPK's lawyers sms-ed that the police may still want to talk to Raja Petra again burt this time he has no more computers to "lend" the police. BTW all you RPK fans out there why dont we start a fund to get RPK another laptop. Every time the coppers "borrow" one we will get him another one. Hoi YewTube Tony, you did a great job collecting funds for BUM2008....can you do likewise. I want to start the fund rolling with RM10....sacrifice one beer, no problem. According to Tony over beers at the PJ Club, his video clip invited 13,000 hits and if each contributed RM1 we could have a mini-warehouse of lap-tops for RPK.

BREAKING NEWS 2: The police had made arrangements to meet Citizen Nades at 10.00am this morning at his office. He tells me that they have postponed it to tomorrow at 11.30am. I asked HANTU what was that all about. He is giving me the cold treatment since last night. Ah well, he will come around.....he will.

Zorro,
For the record, it wasn't my idea ler....it was that fellow with the long hair, and spends most of his time in court!
He suggested I take the role to raise funds, but I am gonna pass! RPK has lotsa supporters! So the money is gonna come fast and quick! We need two persons to be accountable, otherwise those accusations gonna come fasta then the money!
I suggest we have a joint account, and the moment we get 5k! We stop collection! Or we can always use allblogs account, its a joint account with two protem committee members! what say you?
If everyone's ok with all blogs account, then I will publish the number, and all emails of money sent should be compiled by a third party, this way, it is really transparent......what say you?

The person was me, the shadow that you always afraid of....

Yah mann, that fellow with the long hair who spends a lot of his time in court keeps losing his laptop too, yes?

Lets go for it, but first we have to ask the other fellow with the long hair who has an impending appearance in court, for the go-ahead before he sends us to court with breach of trust not amounting to embezzlement!!!

I say lets do it over a firm handshake (see next posting.)

Shadow...yes, you are a shadow only when there is light. Minus light you ain't even a shadow of a man...and even if you are a shadow you change your size and shape according to light. Have a nice day chasing after your own shadow. Nah, never been afraid of shadows with no name.

You didn't kaypoh with the guy meh? Must do that you know, especially with such touchy stuffs.

Yo! Fund for RPK computer? pls count me in! He is our champion, a true Malaysian who champions TRUTH,and GOOD GOVERNANCE!

And i believe RPK has stated that everytime they return his computers after at least 6 months, that computer can no longer function.

This fund is a symbol of support to show that we apppreciate his courage to stand up to the power of the day who is in defilement of our country.

The fisherman fund will be initiated today to show support for our champion.

That fler was only trying to listen in to all those defamatory, secret stuff you bloggers tell each other mah!

Can you blame him?

The moment you flers "hantam" anyone - since he is within hearing distance, and you guys are in HIS terrortory, he only need extend his handcuffs without having to drive down to NPC or yr home to collect you mah!

That one also you don't know ah?

Maybe he is also their "plant"?

If he is indeed a plant, he is very convincing in looks - cause the rest of you too lawak boys to be bad ass bloggers lah!

Good idea for the RPK fund to buy him a new computer. That was my first thought also when I read his laptop was confiscated. Do advise details soon.

SB is the best candidate. Remember that 1/3 of the police force are SB's.

Hey all,
I am new here.. wud like to donate for a new laptop for RPK...How do i do this
slurpking@gmail.com