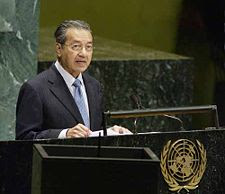 HANTU came in breathless: Tun M has resigned from UMNO.
Before I could ask his source, he flew off in a flurry....wasabe breath and all.

WHY?
IS KD UMNO SINKING? BETTER BE A LIVE COWARD THAN A DEAD HERO? HE BELIEVED UMNO WAS BEYOND REDEEMING? A SUBTLE CROSS-OVER OF SORTS?

UPDATE:3:54PM: Sanusi Junid too following in the master's footsteps. This guy is a discarded driftwood though....the people who follows is an indication of who is crony or apple-polishers.

Update: 7:36pm: Hantu's sms reads: Supreme council drafting communique to read: Resign and you will not be accepted back.

This man was an "Indian" when he applied to join University of Singapore and a "Malay" when he joined UMNO. Soon after he destroyed it and formed his "UMNO Baru". Now he is trying to destroy that too so he and his son can form "UMNO Baru Sekali"...that's my feeling. I may be wrong but I expect that it could be "correct, correct, correct". We should give Lingam a big medal (I mean a really B I G one like the ones made of the cast iron municipal manhole cover)for flushing out Mahathir. Even if Lingam goes to hell, I'm sure that the gods will recognise this service (however unintentional)to the rakyat. Keep on "korek, korek, korek"!

I just watched "Mobuto king of Congo" (catch it if you can - an absolute MUST SEE) & went WOW WOW WOW!

It would appear dictators have very similar traits which are

1. They surround themselves with "yes" men, and nobody dared say the truth.

Ofcourse when they went out of power, their loudest syncopants are also the loudest who turned on them without mercy!

2. Dictators are extremely egoistical. They think without them the sun just can't rise.

3. Dictators justifies their madness for power & wealth by saying it's for the good of the nation - so destruction of the country was only a small sacrifice for them.

Again, Lives are always dispensible for the "good" of the country

4. Dictators often go to their graves unrepenting - never giving satisfaction of an apology to those they destroyed.

5. All dictators die EXTREMELY rich - but their money could not buy them immortality.

Yeah. None took their money to their graves either!

Anyone see any parallels here or was the documentary so good I keep seeing ghosts at every corner?

Go out and celebrate!

Tunku and Tun Hussien left the UMNO mahathir created, because they had total disdain for what mahathir was doing. mahathir is now leaving the party he has created himself, because he could not get his way.

He hopes others will follow his example. It would be good to see how much of a support he has in UMNO. AAB now has the opportunity to put mahathir to rest for good, at least in UMNO.

mahathir’s arrogance knows no bound. This arrogance is a result of his bloated self-confidence in himself. He has convinced himself that he can do no wrong and his logic supasses all others’.

The logic and confidence which are built with no moral and spiritual foundation are now tumbling down. Malaysia is on the path of recovery from 2 decades of decadence. There is hope for Malaysia yet. Just imagine what people’s unity can do!

it has taken over 25 years to see the damage this donkey of a man called the mad hatter has done to Malaysia and now his sandiwara he is resigning from UMNO.
proton, klia, F1, bakun dam, BNM bailout, apa lagi woi....
now in his blog he talks of ketuanan crap and how the non-malays demanding more.
he is full of crap.

I think he wants to join MIC, where he belongs.

so Mukhriz..what the hell are you waitng for. Your father has asked all to follow him. If you don't resign..you only make your father look like a fool.

But are you jantan enough as your father.

Hats off to Tun....I salute his signle mindedness.

Could this be another devious, calculative move by a devious mind?
Could mahathir do this as a pre-emptive move? Could he have got wind of AAB wanting to take him to court on the Lingam’s tapes affair? He is doing this as a distraction and to dis-stabilise the government so that he can get off scot-free.

first he plays the racial card, now he throws in the towel. You have to see that the man is desparate to create turmoil and provoke the Malays, and shatter the peace. He is playing with fire, and we will all get burnt.
I shudder to think whats next??
It seems he will not rest till he achieves his aims. He is now the rebel rouser..for him the end justifies the means... this is very very dangerous.

even this jamban he built is too repulsive to be use... anymore!

Now you have an UMNO that has as its membership only one Prime Miniser to its name. ABdullah Badawi! Mahathir is not a member and if he was to die before resuming membership then this UMNO cannot claim having provided any Prime Minister to this nation other than Abdullah Badawi. Of course it can reluctantly also claim that Mahathir was from it as well.

I say to this ultimate racist" Good riddance to bad rubbish!" He tried his utmost to provoke the Malays that their powers have diminished, that the non-Malays are becoming more vocal and powerful, but he forgot that the Malays of Malaysia today are more liberal-minded than what they are given credit for, save for a few hardcore racist still living in the Jurrasic Park! Let's now see how many will follow Mahathiu to kingdom-come. It's getting interesting by the minute since PRU12.

Didn't the gomen just announced they are pulling out from Proton? Pak Helah pulled the plug on his very favorite project, so grand old mamak is heart sick lah, sakit hati, merajuk! now Pak Helah is making grand old mamak madder each week. hmmm, maybe pushing the edge? sounds like he's suffering from schizophrenia? my, my... what story is he concocting next?

Malaysiakini reported today that former PM Mahathir has quit Umno. It also reported that former Kedah MB and former Agriculture Minister Sanusi Junid has also quit. It appears to me that Mahathir is trying to use Kurt Lewins philosophy of change management by asking Umno members to leave Umno now but rejoin it after Badawi 'has left the building'. This is akin to Lewins’ Freeze-Change-Unfreeze mechanism in Managing Change.

The only problem here is that the Umno members by now wouldn’t want to gamble with their political careers but would be pretty enticing and justifiable for them to be Independent MP’s, meaning they are neither BN or Pakatan Rakyat (PR). When this happens, we would actually have an interesting scenario where Pakatan Rakyat will come to power by default without even needing the ‘kataks’ (frogs) as PR will be able to form a minority Government with BN fragmented.

Why to do think former DPM Musa Hitam’s protégé Shahrir Samad is talking about a possible snap election? These UMNO racists will try anything now just to stay in power, as they know their days are numbered. The greatest fear the BN/UMNO politicians and their benefactors have is that when PR comes to power, you can just imagine the amount of dirt the new Pakatan Rakyat government will expose for all to see. You can expect even Bukit Aman to be turned inside out. Even IGP Musa Hassan’s toilet will not be spared. Say your prayers folks, for the Day of Judgement is at hand for BN/Umno and their cronies!

As for Mahathir’s use of Kurt Lewin’s Change Model for Umno, I’m afraid Mamak Tongkang’s plan will only backfire. You see, Umno, Gapena, Majlis Pemuafakatan Melayu must come to a realization that communal politics in Malaysia is history. No amount of Keris rattling is going to bring Malay support back to Umno. The same goes to non-Malay support for non-Malay BN component parties. Today, a new dawn has come to Malaysia. Today, we call ourselves as Bangsa Malaysia. Malays, Chinese, Indians, Kadazans, Ibans, Eurasians don’t exist in this country any more. It only exists in our DNA. We are Malaysians for Ketuanan Rakyat! We are Bangsa Malaysia! Hidup Malaysia!

We do not need anymore fire in our already burning fire.

TDM's nightmare that DSAI will really become PM and he and his cronies will be exposed for good!

This man will do anything, even destroy the nation, to save his skin!
Just check TDM's history!

I personally respect Tun Mahathir's decision & congratulate him on his Wisdom.

For as long as PM & his UMNOputras are in self denial , still on their BLIND self destruct trajectory... then it is definitely the Final Curtain & check-mate for KD BN !

The reduced strength of the remnant MCA, MIC, Gerakan, etc including the good BN members, cannot champion their party’s cause to the rayaat. They are intimidated to sing the same BN tune which is all rhetorics ! Talk is Cheap, anyone can do it !

They will need to break away from BN & UMNO to convince the rayaat & really “Walk their Talk”.

One by one....steadily...they will jump ship with a choice to live another day in the PR lifeboats or DROWN forever !

What more is there to say or advise !

somebody's been enjoying the spotlight a little too much lately...and is starting to get carried away...