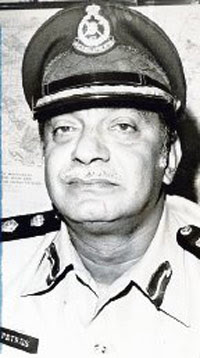 This morning was quality time spent sending off a friend of 42 years to his final rest - Anthony Quentin Petrus, Sonny to family and just plain Tony to friends.

PETALING JAYA: Retired senior police officer Anthony Petrus died yesterday. He was 76. He leaves behind a wife and five children.

Petrus joined the force in 1952 as an Inspector and became the Petaling Jaya police chief in the 70s. He retired while serving as the Penang police chief, ranked Senior Assistant Commissioner of Police (SAC) 1, in 1986. After his retirement, Petrus spent his time helping the Orang Asli community in Seremban.

He was rushed to the University Malaya Medical Centre on Monday after suffering from breathing complications. He died of kidney failure at 3.50pm yesterday.

The MSM did not report that he had a stint as the field commander of the FRU in Ipoh. He became the security chief of Genting Highlands but for reasons known only to a few of us, walked out of the comfy job. A RAMROD STIFF POLICE OFFICER JUST DO NOT WORK AS SECURITY CHIEF. PERIOD, PERIOD, PERIOD. (It is so different today. HANTU told me of many still-in-service top guns moonlighting as CEOs and Directors of the plethora of Security Organisations sprouting in the country. Not true yah?)

Yes, Tony was the untouchable, the incorruptible. I remember at an APEX CLUB post-mortem meeting of which I was the organising Chairman and he the President of this service club, he blew his top when RM15 could not be accounted for. He barked: "Bernard, you are the chair, you are responsible....we will deal with the treasurer later...but as of now, you are the chairman, you are responsible....give me the RM15." Fearfully obedient (definitely not a trait of mine, I swear to you) I complied. After the meeting, he spent more than RM15 buying three of us beers at Salt & Pepper.
That was the man....ramrod strict....incorrigibly firm.....but admirably fair. He was like an elder brother to me and a mentor to boot, during my unholy bachelor days. He was the only one who told me in the presence of the future Mrs. Zorro, "I will fry your ass if you allow this woman to get out of your sight." What type of a friend is that? Well, he was that type of a friend I had....that some of you did not have.

In 1977 I was assigned to a school where drugs and indiscipline were imperceptibly creeping in. I was made the discipline master and Prefect Master. Six months into the job I changed the prefectorial board. I made up my mind that this was a school where you do not need top students or teachers' lap dogs to do a man's job. Through some networking I selected my group, the street-wise kids who knew the "ropes". I suited them into jackets and when installation ceremony came around, I got TONY PETRUS, THE OCPD OF PETALING JAYA, to pin the prefect's badge on their jacket lapels. Can you just imagine the boost those "reformed" mobsters had? It was not a word yet in those days, but Tony's speech EMPOWERED those kids. THE SCHOOL WAS CLEAN BEFORE YEAR END.

FAREWELL MY FRIEND....AND WHEN YOU FINALLY NOW GET A CHANCE TO HAVE A BEER WITH THE LORD, SPARE A THOUGHT FOR US WHOSE LIVES YOU TOUCHED. I PROMISE THAT I WILL LOOK IN AT JANET.
Posted by zorro at 5:14 PM

Yes Late Tony Petrus was a good man. No more such calibre police officers at present times. Had the honour of serving in the same force with late Petrus. On a couple of occassions shared the Bar at the famous Venning Road Police Mess near Bukit Aman. With the likes of late Felix Sunderaj, Stephen Gonzago, George Boucher, Gian Singh, late Pete AP Rajah and many more....Those were the days my friends....

Yes he was a pukkah gentleman. A good soul. Almighty has created only handful like him.

I salute you Sir Tony Petrus for the final time. Rest in peace.
Amin.

I did not know the man but from all that you say, you have truly been blessed with good friends.

Will join you to raise a glass to him next we meet.

Zorro,
Good people are always among good people. The bad guys are just too bad to blend in. They just don't know how. May God have mercy on them. Talking about God, I think we better be on a vigil, for our brother Pete may just be hauled up anytime even in the ghostly hours as thats when the devils are most active.

FYI, A La Sallian and ex-Revolver passed away on Saturday morning. Anthony Samuel @ Christy, who was the drummer before he met with an accident in the early 70s. Those were the days when we had good bands playing every weekend and at most receptions, songs of the Beatles, CCR etc

Amongst those who attended the funeral mass was Freddie Fernandez. Those were the good old days....

RIP to Tony Petrus and Christy

how many Tonys left in the force today?
I dont know him nor heard of him. But from what ou said, he is truly a gentleman. GOD Bless Him.

thank you for honoring my grandfather. Very nice post on him

bernard were you the disipline teacher in la salle pj, if you were than I remember you all the way from finland, I was from CHS, and before an under 15 hockey, we like champions were smoking ciggies near the football goal-posts, this was in 77, thinking back those were the days. btw we got screwed the next day by pasupathy and remy martin. cheers.
gill. finland.

Dear Master Bernard or Sir as we shivered each time we saw you in school.
You look great Sir, can’t believe you are 68, well I'm no longer the 13 yr old either (45 and a father of 3 now).
Reading what you said about changing the whole scenario of the school brought back so many wonderful memories.(You did an excellent job)
One incident that our class would never forget and we still talk about till today is when you walked passed our noisy form 1 class, our form teacher was the young freshie whom we were taking advantage of (Canteen Operator’s daughter, Miss.Lim). You took the whole class and made us run around the school field 5 times and then made us all do push ups after that, some namely Kok vomited. We had aches and pains that lasted the whole week but that day marked and tattooed a kind of teaching and discipline that we all proudly carry to this day.
I sit on the PIBG board in the school where my Son 17 and my daughter 13 is, I don't see even 5% of the dedication and love that Teachers like you had.
My best regards to Mrs.Khoo too ( She use to teach us geography, we use to keep dropping our books on the floor, you know why lah....I'm sure she still is really beautiful.

God Bless you and the whole Family richly.

Mr Bernard, Sir, I suspected for long that you are Mr Bernard Khoo. I was also from SAS, during your tenure there but as a student. Really appreciate and respect you sir. Take care of yourself and if Ms Khoo is the geog teacher than she was my teacher too. Appreciate you both. regards and take care. mani_136@hotmail.com

The late-Anthony Quentin Petrus was my Godfather. He and my late-Dad served together in the Malaysian Police Force. My dad passed on in 1996. The 2 ol' friends meet, at last.
regards...eugene chung