THEY TOOK THE BLOWS AND WON! 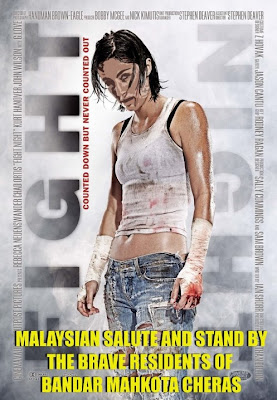 There is finally some good news for Bandar Mahkota Cheras (BMC) residents - the federal government has ordered that the controversial toll-free access road in their neighbourhood to remain open.

TO THE TENACIOUS RESIDENTS OF BMC,
THIS BOB MARLEYS SONG,
IS DEDICATED.

Don't bother to say "thank you" to the federal government or to what most of you would call it is the UMNO led government.

Sad to say that people seem to always have to make some blood sacrifice before change can happen.

The issue of police brutality in Malaysia is very serious - very repressive.

This is definitely good news for the BMC residents. But the issue is not over yet. They still have to wait for the court to make the final decision on whether the road will remain permanently open, or closed.

In this whole affair, I think both the state and fed govt should really come out clean about what they have approved, and what they have not. If Grand Saga is barricading the road illegally, say so. If the plans for the road was never approved, say so. If they have made a big boo-boo because they never took the time to sit and discuss about how which road is going to join where, admit it.

People power has brought temporary relief to the residents. It's time the authorities did their job properly, and answer to all the questions of the legal issues in this case.

They took the blows
And they won on the day!

We can smile for now
Until the final hurdle is cleared once and for all
Let the Peoples’ Front rule the country
Let there be true democracy in our lives
And the management of the country resources
The administration, policing and contracts

Yeah they took the blows
Won the fight with blood, sweat and tears
Finally the BN sleeping leaders woke
Aiyoh…….stop the drilling!

I truly salute you from the bottom of my heart! I will submit your episode to the Reader's Digest's article/feature section on Heroes
Against Crime'

My only hope is that ALL parties will accept ANY decision from the Court relating to his issue.

I do hope that the losing party (there's bound to be one) will not resort to any method which will go against the decision of the Court.

The losing party (either BMC or Grand Saga) should also refrain from making any remarks that the Court was biased in deciding the matter against them.

Once the decision has been made, please abide by it. The dissatisfied party can always appeal.

You can't say that! The court is bias and pro government and most likely the decision would have been made before even the story is told in court. The people of Bandar Mahkota Cheras should know what is right and what is not. If not this unfortunate incident would not have happened in the first place.

What have we become of? You almost start paying toll the minute you step out of your house. Where are all the money from the Road tax have gone? Are there any other cities around the world are like this? Another BODOHland!

they took the blows..and the police got off scot free with the Alor Star CC Bie defending the actions of the FRU.

That bugger from Alor Star was sleeping or was it that they had a truncheon up his "you know where" that he had to cock talk.

What we have here is a 4 cornered fight for survival be it financial, political or socio fairness based - i.e. Grand Saga, Developer, Politicians and beloved Rakyat.

Now who conned who and who screwed who is the subject of intense speculation and emotional debate.

The current targets are Grand Saga versus Rakyat.

Let us not forget the other two missing bits of the equation. Only then will you know the true story as to who screwed who leading to this mess.

Keep an open mind guys, emotion is good - only when tempered with good judgement.

Ciao and back to Laphroaig for me.