ARREST ME NOW OR LET ME GO! 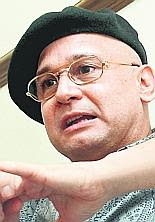 That was exactly what Raja Petra told his interrogators who for the better part of two hours was "persuading" him to make a statement. When they failed to get a statement from him, they opened the interrogation room door and Pete walked towards us at around 5.55pm to a shout of Daulat Tuanku from a supporter and clapping from a group of bloggers.

When I arrived at BlogHouse at 4.00pm, Rocky, Nuraina and Tony Yew were already waiting for me. When we arrived at CCID at Bukit Perdana Marina was just walking out, as she was not allowed to be with her husband, unlike the occasion when she was questioned by Police and Raja Petra insisted that he would not allow his wife to be interviewed by strangers without his presence as her husband.
Within minutes of our arrival, the media people trickled in and in no time the entrance of CCID was a sea of activity around Marina. Bloggers sms-ed other bloggers. ShanghaiStephen and Eric Voon arrived, followed by Member of Parliament for Wangsa Maju, Yang Berkhidmat Wee Choo Keong. Last to arrive was Gus Gan of Fisherman's Wharf who had to replace a flat on the way.

The reason for this change of date was quite obvious. The mata-mata thought that this last moment summon of RPK would mean less media attention. The 5th estate mechanism showed their tongue to the authorities.

YB Wee, accompanied by Rocky attempted to enter the premises but was denied entrance but given no reason. No fuss was made because we knew that MP for Selayang, YB William Leong was with Raja Petra.

Watch this YewTube production of the events by Tony Yew of MyBlog TV.


GENTLE REMINDER: TOMORROW AT (2:00pm)CENTRAL MARKET THE LAUNCH OF BENAR.

It's a beautiful moment seeing dear Pete stroll out of the cop shop to hearty applause and a well-deserved 'Daulat Tuanku!' - I would have been there too if I were still living in the Klang Valley. I get the feeling the police are beginning to feel embarrassed and irritated to be put in such unsavory light by having to take orders from the REAL criminals posing as the government. As in the case of being instructed to harass PKR leaders after the April 14 Freedom Rally, it appears our guys in blue are only going through the motions to please their BN masters - knowing full well that those ordering them to perform immoral acts of harassment against innocent people may, in a matter of months, be under arrest themselves!

zorro
thks for update.MT is difficult to access now. Tony did good job to film it.

RPK rocked! (again!)
bernard - I am always comforted to see you too are there for truth & justice!

THANKS for being where I can't be!

Thanks for fighting the good fight since I can't be there to lend support.

(impervious to Peace Hull shenanigans but not MOSQUITOES)

RPK rocks alright - i wish him all the best, he has been an inspiration to us all.

Such a pity he didn't run in the last PRU, would have been nice to have him in parliament. But then again, what would we read daily?

I just got back from singapore and missed all the action and just got to know the latest from your blog.

This is typical of our police and the government and a very good example of the police acting as gangsters for the politicians!

They will harrassed and intimidate the innocent and the common people!

The real CRIMINALS are having their freedom and a good time. Criminals are walking freely in our streets and the police spend their time in harrasment of the good people!

These guys are real BULLIES!

And this reminds me of the other big bullies; the NST suing real good honest people. I am now convinced and will support you guys in the MSM boycott!

No more buying NST and the STAR for me!

We, the people shall unite and throw out this big bully of a government in the next election! We as a country are in dire need of good and true leaders or we will see our beautiful country going down the longkang!

Kojak wins again!!!! There's just no way to stop him.

Bro,
Do you know,Malacca's CM started blogs for all his Aduns but sad to say that they are just like their leader ali rustam,never response to queries from rakyat.being Malaccan,i posted to adun Kuala Linggi on some issues,2 weeks have gone,this goon still in slumberland.Check it out bro,www.barisanmelaka.blogspot.com.Hope you can do something..thks bro