A DEAD FISH HANDSHAKE....THAT'S WHAT IT WAS. 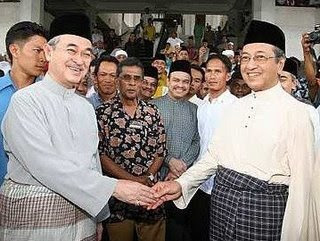 DEAD FISH OR LIMP FINGERS?
As a student of Body Language (or non-verbal communications) this photo of the two warring incumbent and former Prime Ministers sent out so many messages.

Allow me to share some notes I gathered from two internationally acclaimed experts Allan Pease and Lillian Bjorseth who I refer to extensively whenever I conduct seminars on communications:

Handshakes
Another vital component you need to bring to any interpersonal encounter is a firm handshake. Again, those few seconds you "shake" can empower or weaken a relationship. Men's handshakes are typically strong and firm because they naturally have a stronger grip.

Women, get a grip and be noticed! I once got a client because the man I shook hands with remarked about my strong handshake and asked what I did. He decided it was time to hire me to teach his people how to shake hands, too! I kid you not.

Being familiar with the following handshakes will help you immensely in your relationship-building activities:

Controller
A person extends his hand to you, web-to-web, and as soon as your hands are linked, he purposely maneuvers his hand onto the top. He's telling you he wants to be in charge. Keep that in mind as the interaction continues.

Sandwich
Use this one only with people you know. When you envelop another person's hands, you are invading their private space ... where you are to be only when invited. Society promotes the standard handshake but is not as tolerant of using both hands. By the way, this handshake is also known as the politician's handshake ... which may be cause enough for most people to avoid it!

Dead Fish
Imagine rubbing a scaly, dead fish in your hands ... and you got the picture. Your hands typically are wet for two reasons: You are nervous or you have been holding a cold beverage in your right hand and move it to your left just before you shake hands. In either case, it is extremely unpleasant for the receiver. If you experience anxiety, wipe your hands on a napkin, the tablecloth or even lightly on your sampin. What you spend at the dry cleaners will be paid for quickly by the better impression you make. As for the beverage, use common sense. This type of person, who places a limp, lifeless hand in yours, is sending a negative message.

Limp Fingers
Women, far more than men, extend their fingers rather than their entire hand. It can be painful for the extender, when she is greeted by a man who shakes with his forceful grip. Men tell me this frequently leads to their giving women a lighter handshake. Professional women respond that they want to be treated equally. One of the ways to combat this syndrome is to always extend you full hand (never cup it) horizontally, even if your grip is light.

This person will barely put three or four fingers in your hand—and then withdraw them quickly, almost as if afraid of catching a dread disease. They appear timid and sheepish.

PEOPLE, YOU FIGURE HOW IMPLOSIVE AN UMNO HANDSHAKE CAN BE?
Posted by zorro at 4:03 PM