HE TALKED HIMSELF INTO A TEN-FARTS SALUTE. 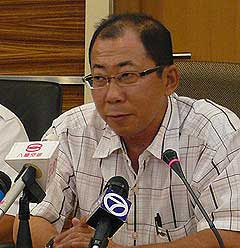 Now hear what this MCA lari cur has to say about the beatings at Bandar Mahkota Cheras:

Deputy Home Minister Chor Chee Heung (BN-Alor Star) explained that the police initially did not interfere with the scuffle between Bandar Mahkota Cheras residents and alleged thugs because they were waiting for back-up.

His ministry goons did not interfere with the scuffle between Bandar Mahkota Cheras residents and alleged thugs because they were waiting for back-up. The police had guns, the thugs had parangs and pipes....waiting for what back-up....or it was a Catch 22 situation: they did not want to whack the residents because the residents were watching, and they did not want to whack their own friends (aka thugs)....so they waited for back-up. Back-up to whack the residents or back-up to whack the thugs? How stupid can this deputy minister be albeit he sure looks stupid. Which market did the MCA recruit their machais from? It is no wonder that the MCA is already a fossilized organisation snooping on each other.

"I did not receive any news or report about police using too much force but I assure you that the police will always act in accordance with the law," he summed up. This is a load of bull-crap, I say. 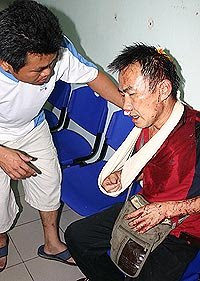 So this guy above is a studio extra with all the props.... 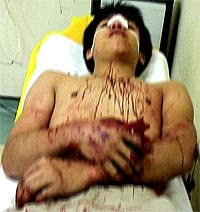 and this guy above is the make-up artists master-piece?
"The few police personnel present were managing traffic and were unable to act due to their numbers."

"They only managed to get the district police chief to send more enforcement to that area. By the time the FRU (Federal Reserve Unit) and police officers showed up, the scuffle had already ended.

"All they could do was to issue warnings and told the crowd to disperse. In the confusion, residents were beaten up by unidentified thugs and they decided to use more force by using a car to knock police officers over."

You were not there so who told you to say those things?
Chor, you are the epitome of Chinese stupidity.....an end-result of some misdirected clash of misguided genes. You are a sad case indeed. Macbeth must have had you in mind when he uttered those immortal line: the devil damn you, you cream-faced loon.

And like all BN operative running dogs, he signs off with some unwarranted advice:

"The police are professional enough and I am confident that they can investigate properly into this. Don't just base all your accusations on Malaysiakini."

So in you go where you rightly deserve: a ten fart salute. Hope you come out a changed man and smelling like a daisy. Have a well-deserved stay. We will inform the rakyat, especially your constituents when you deserved to be released back to them. 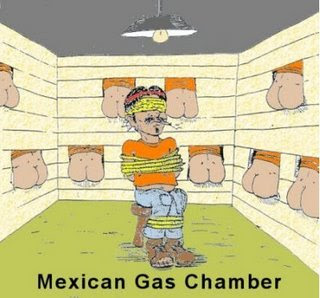 Oooi.....Chor Chee Heung , you are really "B"alik "N"eraka's best actor of the year.So wait for your turn to get a"ward" then.

A word of " Sorry " cost you not much but it mean "care" and a lot to Rakyat.

moron/stupid, should learn to keep their mouth shut...

Bravo !! Mate !! you have put yourself in coffin !! another half dead MCA man walking in town !! Pls remind yourself the number of votes you won ? :-) very very little you know ..... so pls enjoy your dummy deputy minister while you can, cheap guy like you won't be long !!

Make no mistake, Chor is the super untimate UMNO bodyguard and so do all MCA guys. Pls continue as Umno bodyguard ..... kiss Umno leg and ass ... and Rakyat will kick your ass soon.

zorro, why waste the gas. ship him to gulag in siberia and freeze him for eternity.
this MCA el-cheapo deserves it. oh, by the way, maybe you should check out whats his role in the shitty Port Klang Free Trade Zone scandal. someone told me he was some shit chairman in a Port Klang agency stuff.
Hey, MCA next time make sure such low lifes retire early. snop and kick them out before they become a liability.

Anon 11:24
Not to worry....the GAS are from donors and sponsors. I have a long waiting list of volunteer-contributors. Maintenance is embarrassingly low too. Shipping these low-lives to Siberia will cost a bomb and it is not worth it.
Will inquire from my friend the Ancient Mariner if he is one of the PKFZ crooks. He looks capable of being one too.

As so shrewdly observed by Lim Keng Yaik, Gerakan, MCA & MIC are nothing more than beggars, waiting like panting canine for the crumbs tossed to them by UMNO.

Having walked around for so long with the begging bowl, Chor and his party MP's can say nothing wrong about their Masters, even if they fart on his face, or worse, pee & s..t.

The fault is ours for thinking that they represent our interests.

Sure you got the correct pic? looks like a bald headed chimp with spectacles!

Maybe it is true...I have often heard, we have monkeys as ministers.

...in any case, he sure looks like a dog's arse....what a prick!!! It's morons like this lame excuse for a human being that makes me feel ashamed of my race....sheeeeessshhhh!!!!

This guy is a moron!! Does he really think we shouldn't base our accusations on what Malaysiakini says??

Well, we saw the goddamn evidence there!! Would we prefer to hear your baseless words or see for ourselves??

There is no more confidence in the Barisan Nasional government, much less in the police force.

Chor Chee Heung, and subsequently MCA are totally irrelevant to our political climate these days.

He can defend the cops without looking at evidence and also shrug off evidences (photos and first hand reports) that is contrary of.

We should hand his chinese Minister post to anybody from Sabah/ Sarawak who should have more brain.

The BN, especially UNMO, still hasn't learned anything after the 8th March tsunami!
It is still bullshitting the people about implementing reforms to win back their votes. And the wonderful thing is that there are still people out ther who believed them!
Bear in mind that true reforms will only come when there is a change of government.
With this government, nothing will change!