STILL THINK NS IS FOR YOUR CHILDREN? 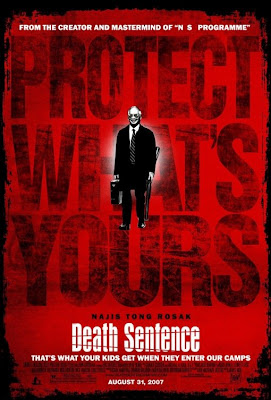 I chanced upon this on YB Fong Poh Kuan's blog:

Coincidentally I tried to send a letter (see below) to the Star yesterday voicing my concern as a parent. Since it was not published, I hope you can publish my letter on your blog and hopefully it reaches the right ears. By doing so maybe we can prevent a cover up of problems more serious than we thought.

My daughter has been selected for NS training next year. Naturally, reading of yet another NS tragic death in the STAR yesterday (”NS trainee dies of fever”) we could not help feeling worried for our daughter’s safety and welfare.

It is not enough just to investigate the cause of death. The allegations of apathetic attitude of the officials must also be thoroughly investigated. These investigations must be conducted by an independent party and NOT by the Training Operations Sector Deputy DG. It is an extremely serious matter and the credibility of the entire NS project is at stake. There must be an open, independent and transparent investigation and any wrong doing or negligence must be punished severely. Anything less is not acceptable as lives of young people are at stake here. As parents we support the NS scheme and entrust the safety and well being of our children to the Government for the three months they are in the NS scheme. Anything happening to them during this period is the sole responsibility of the Government and as such, it is incumbent upon the Government to take all necessary actions to ensure preventive measures are taken to ensure their safety and well being . Making apologies or monetary compensation after a trajedy has happened is no comfort to the families of those affected. And please do not quote statistics. These are human beings and even one trajedy is one too many. If the Govt. can ground an entire fleet of aircrafts after a few crashes until we know what is the cause, surely the same concern is applicable after a few NS deaths.

We sent you a child in good health and we expect the child to return in equally good health.

My son will be eligible to participate the NS services next year. I am not happy to sent my son to this training camp where the government cannot guarantee my son safety.

I think I rather face the consequences of the law then sending my son to the unknown.

Sorry Najib and Lee Lam Thye, can both of you , from your heart and conscious send your children to this boot camp?

no point in asking the duo coz the heart is long gone and replace with other parties interest.
no, they cry no more for deaths in NS. I bet my last dollar there will be more body bags coming out from the NS program.
Enough said. Onwards to the Forum and Unite we will against the NS for the benefit of our Children.

Many parents voice their disagreement with the NS programme everytime an accident happen to the trainees. Still this is only a minority compared with the number of participants in the programme. Maybe there are also the silent minority/majority unaccounted for, the numbers we wouldn’t know.

But we also hear positive comments and raving reviews from parents and trainees about the NS programme.

If we were to compare the ratio between the number of accidents and the total NS trainees in the programme, it will be like the distance between the earth and the moon.

Zorro Sir, would enrolment into this NS programme on voluntary basis satisfy the people who are against it?

Will they again say “No. Don’t use the tax payers money” just because their kids is not going to be in the programme?

Zorro Sir, I’m sure as a trainer yourself, you would agree that NS programme is formulated for the good of the kids.

I would suggest that participating in the NS programme (after its reformation) be made on voluntary basis and those who are against it should not deprive other kids the opportunity to benefit from the programme.

just refuse to allow your child to attend it. that is what i will do.

just consider this:
in the short time we had this ns for 3 month durations, about 20 have died.
singapore has had their ns for much much (and years years)longer and for durations of 2 to 2 1/2 years. and so few deaths.

definitely cannot and will not risk having my child even with the threat of jail.

Everytime something bad happens in Bolihland the finger pointing starts and the sloganeering speeds out of control, invariably onwards towards BN, the convenient Bogeyman. We forget there are many contributory factors and the entire issue is more complicated than one thinks it is ! In the hands of a deranged self glorifying Blogger , ( pay attention to their hits counter prominently displayed in some ) such alarmist posturing/sensationalism smacks of a hidden agendas, which one of them we all know is not so hidden, its called BN bashing ! Be truthful and be realistic to resolve this trajedy. Think deep, dun shoot from the hips. Most of all be real and really caring. Dun cry for attention ! Do the right thing.

No need to complain to Najib and Lee Lam Thye anymore. They are boneless and irresponsible.

One only dare to make statements in parliament whilst the other said his his position is for show only. They cant claim their positions are to serve anymore..

when bloggers blog an issue, it oftens relate to the actions or inactions of the government, which of today is formed by BN. Even if there is a change in government, I am sure the bloggers will continue to highlight and thrash their dubious actions. No, their agenda is clear as daylight;its not BN bashing, its ISSUES.

I strongly disagree with your statement; ‘Still this is only a minority (accident) compared with the number of participants in the programme.’

Statistically the rate of fatal accidents in the bolehland NS programme is very high. It’s superficial to say that 17 out of the hundred of thousands is just a small number!

The keyword is per 100,000! In some other medical cases that keyword could be per million!

If we can compare the similar accidental death rate with S’pore, Taiwan, Israel then Bolehalnd’s NS is a death trap for our youth!

Just like our porah education policy BN government never value our youth human resources. These bigots only have their pockets to consider!

Why they don't want to terminate NS? Cos it is the most lucrative avenue to pocket money. You know each year it cost the treasury minimum 500 over million RM.

Let pray that PR will take over the govt within this year. The NS will definitely bye-bye!

anon 10.31 you seem to be the one that's screaming for attention while hiding behind a cloak of anonimity. Sheesh moron where have you been for the last 25 years ? Who's been the govt. of the day ? Are you such an idiot that bloggers only hit our at the BN ? Blogs go after anyone whom they think have made the rakyat look like fools and you're not included cos the rakyat are not morons but you are, to question the rights of the stupid BN's dubious money churning and crony enriching "quick-fix" projects implemented with tax-payers money that only benefits an elite bunch. By the way you must also profit in some ways, right ? That's why judgment day is here for all those arrogant and lazy BN suckers as GE 12 is the proof. Otherwise just shut the fcuk up, and crawl back under to that "tempurong" you came from, gitit moron ? Sheesh zorro you breeding morons in you blog? They seen to be popping up by the numbers man. Time to detox you blog man. Malts would be good ?

Fair and Square....which I will prove you are far from it. Evidently you are a new-comer to this blog...with an agenda.

Are there anything anti-BN on my sidebar?

Have you read my 13March posting where I told Lim Kit Siang to shut the fuck up. That invited 116 comments, a few advising against my use of expletives.

Have you read my 11 March Must Do list for the PM. In the end I said: There are still some good men in UMNO....listen to them.

You accuse bloggers in general and me in particular, for self-glorification because we have sitemetres. Of course it has a purpose...pure and simple...MONITORING. The number of hits tell how we are doing, what is readable, what is not; why did visits in March shoot up to 136,400 visits; is my average 2 postings per day (62 in March)the answer?

Clustermaps (if you care to click on it) tell us where our visitors come from. It encourages me and thrills me to bits to know that my readers come from all over except Inner Siberia. Now how do I get people there to read me. Maybe, they do not have internet coverage.Any idea?
It reinforces you in your blogging to know that people around the world read you and not the NST or Star. Eat your heart out, son.

However if you still think that this blog is dedicated to BN bashing, it is best you do not visit because you are already in blinkers and I do not particularly have the time to humor you. Best you go to sites like Khir Toyo, KJ, Ali Rustam, Muhamad son of Muhamad, or even Che Det...they are more palatable and could be a panacea to cure your ill-thoughts. Be fair to what you call yourself - fair and square. Peace and good-bye.

Shang, I hear you. But there is such a thing (a strategy/technique)called smoking them out or drawing them out. Once they are out, the mangy stink is overpowering and you have to gas them and then deodorize the blog.
Malt tonite at Fisherman's?

Sumpah will come .... and unmasked and unarmed. Must locate highly dehydrated YewTube. Wonder if Bentong Sam is not harvesting Talapia. Get the two hardcore neighborhood bachelors Benny & Chew before Piccadilly Seah wakes up at 11pm and come over for his second wind (round?). Has Soapbox Arthuro been released from Singapore? Tonite's theme: Drink to NO 2 NS! Dang, it will be a party to prepare for Sunday and Wesak. Ooooommmmmm x3 Buddhist blessings on Fisherman's Wharf only if there is a pre-public holiday discount.

Without transparency, parents will not know exactly what had happened in these camps. National unity should be taught to our children from the day they are born. Not in just three month's time in their late teens. And with our politicians shounting & fighting on "who" should have and "who" should not have special privilages & rights, how can we teach our children to have fairness and respect amongst us ?? Let's be democratic. Listen to the Rakyat. Scrap the NS ! Don't waste anymore taxpayers' money.