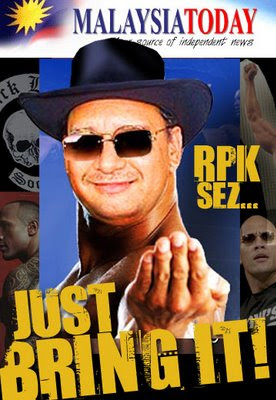 YEP! Confirmed it with Marina just a while ago....The Police has asked Raja Petra to come to the CCID (the same place they freed Nat, also the same place that they grilled Jeff Ooi, sometime last year), just before lunch time. To be exact, they want him there at 1100 hrs, tomorrow.

It was reported that 6 coppers interrupted the family breakfast early this morning, questioned him and "borrowed' his notebook. Raja Petra and Mrina was with us at yesterday's BUM2008. As one of the many panel speakers he took the audience through the three evolutionary stages of his life. Could it be that the SB mistook evolutionary with revolutionary. Possible? NO?

A revolutionary thought came to mind. Is there a provision where each state can have their police contingent under their respective state governments. I know for a fact that in the US of A, the police from one state do not cross state lines, even to go after criminals....they have to get the OK from that state/county police chief. Must get our Members of Parliament to play around with this proposal during the next 13 days.

Anyway, here is what you must do.....especially those who post in Malaysia Today, and who clamour to have their photos taken with RPK....you show your loyalty tomorrow. Bring the family with your bungkus lunch tomorrow to keep vigil with Marina. You bet I will be there after I chair my condo's JMC meeting at 1000hrs. See you....and if RPK is released early, we can go over to Central Market to help launch BENAR, a movement to stand by journalist who also want their truth printed instead of being edited and massacred.

JUST IN: GOT SMS FROM RPK, THE COPS WANT HIM AT CCID AT 4PM TODAY INSTEAD OF TOMORROW.
NIPPING OVER TO THE BLOGHOUSE TO PICK UP
TONY YewTube.
Posted by zorro at 3:15 PM

Goes to show that bloggers beware! Watch what you write i guess, or it'll come back to haunt you. WHich is good in a way in my opinion, there's far too many slanderous and deceiving statements being spread around by certain unethical and "fishy" minded bloggers out there. And it aint doing anything good to help our goverment get their act back together.

Received news from Rocky ... they want him there at 1600 hrs pronto

farzain...you have nothing to fear if you fight for truth...truth never haunts you.OK farzain dont be fishy...name those bloggers who make slanderous and deceiving statements.Expose them. If you cannot, hold your peace, or like I always say, shut the fuck up. I thought Azalina's boys were already disbanded.

F a r z a i n, aka A Franzi aka
'R Sole', are you are an agent provocateur?
If so perhaps you are the one who had better watch out, spies, third columnists and the like, do not fall under the Geneva Convention, or other laws or conventions, therefore you have much more to fear than bloggers.
You are certainly not a blogger.