THE PEOPLE ARE MATURE. POLITICIANS HOLD YOUR HORSES. WE DONT NEED NO HEROES! 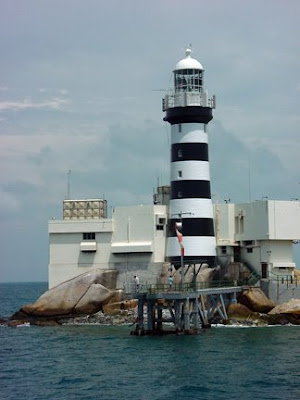 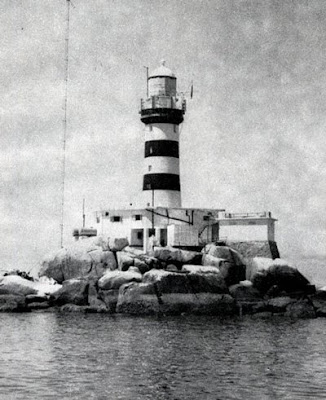 Be Calm And Mature In Accepting ICJ Decision, Says Rais

, May 22 (Bernama) -- Foreign Minister Datuk Seri Rais Yatim says Malaysians should be calm and mature in accepting whatever decision on the sovereignty of Pulau Batu Puteh, Middle Rocks and South Ledge is delivered by the International Court of Justice here Friday.

"(There is) the need for our Malaysian society to be calm and mature about it so as not to translate this into a political upheaval either way. This is very important," he told Malaysian journalists here.

Rais, who arrived today to attend the delivering of the ICJ decision on the dispute between and , said that he had given briefings to Johor state leaders and the Sultan of Johor on the atmosphere of the case.

He reiterated that was optimistic about the case, which was brought before the ICJ after both countries signed a special agreement on Feb 6, 2003.

"But as I stated earlier, how we respond is very important, if we win, it would not be very good to be overly euphoric," he said.

"But it is otherwise, our response must not hurt the feelings of others," said Rais.

"In a such a situation, although we are optimistic of winning, our ability to adapt after tomorrow is what counts," he added.

Mr Minister Sir, advice is well given and well taken. I have great faith in our new Malaysians. What I fear is that politicians will make capital of this loss. Admittedly, as Rocky observed over "tea" in the BlogHouse this afternoon, we have lost one rock but gained two pebbles, South Ledge & Middle Rocks. 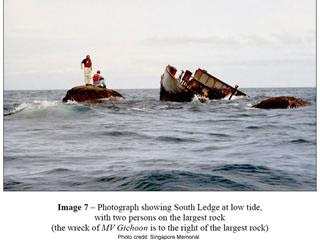 click to enlarge pic below....better to view where Middle Rocks is. 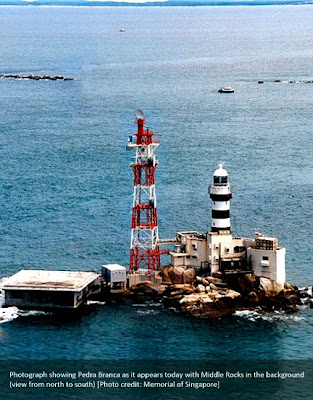 It is best we learn from this loss. We have been too complacent. We do not value what we have until it is taken away from us, and all because we did not care. And when somebody lay claim we rant and rave. That's what Malaysia under the BN has been about. Rant and rave and blame everybody, even the cleaning lady. We take it so lightly that we did not send an elite team. Maybe the team we sent to claim that bit of rock did their best, but their best was not good enough.....even the son of the AG did not make a difference. We have lost a strategic piece of property....no money no doubt....so lets put our tail humbly between our legs and LEARN, LEARN....BE HUMBLE.....LEARN.
Posted by zorro at 6:50 PM

Dear Zorro,
After what Rais said about the consent to go overseas and the way some of legal cases (initiated by AG) were handled, I have lost my confident that Malaysia will get anywhere close to competitive.
Thank you. ChoonLee.

Hear,.,hear..if our govt wanted it, why didn't they share the costs of upkeep of the lighthouse etc way back in the 50's? Ranting and raving now is useless. As usual, we want this and we want that, but when it comes to maintenance...just look at the telephones in LRT stations, hardly one works and all grafitteed, how many ticket machines actually have 'rosak' notes on them, how many ticket entry barriers are faulty..I could go on... that is our 3rd world mentality, no one to blame. Money can't buy everything.

this is the result of their superd photoshop skill.
and for the record there is no finger pointing.

'MIDDLE ROCKS' sounds like we were given the 'middle finger' !!!

There are so many ways we can view the dispute and the ultimate outcome of the Pulau Batu Putih. We can, for example, think of this tiny rocky island as our prime moral property, as per your suggestion. If that were case, we have taken more than 150 years to realize it. This problem should have been solved around 1963 when Tunku decided to expel Singapore from Malaysia. Did our cartographers then come up with a new map of Malaysia and determine our new international border which is acceptable to both countries or to whatever international body which governs this sort of thing? Pedra Branca, its other name, is not like an island half-way between between Brazil and Angola in the South Atlantic Ocean where you can’t really tell whose side is nearer.
Im sure you knew better about the popular phrase of that time – “tak pa”.

At least they can be placed apart.

We don't have the A-Team. We never do. The senior echelons of the government are full of Rentiers and people who got where they are through connections, political loyalty, quotas, whatever, other than through merit and competence.
The AG's son ? Enough said.

Anyway, even an A-Team may likely have lost this case. In International Law, current possession is 9/10 of the law, unless it was acquired by force in recent history. The mistake of allowing Singapore to operate a lighthouse there without any protest was made a long time ago.

If we had continuously and publicly claimed rights over the island right from before Merdeka, it could have been a different story.

Disputing it from 1988 was too little, too late.

Singapore's share is rich with "jackpot" (natural resources !) & has the lighthouse (Navigation Beacon which they are making money from International Maritime shipping whilst Malaysia only got 1/10th the equivalent of Pulau Pedra Blanca!!! No.

Malaysia told lies & did not do their homework....How to compare "Thoroughbred" racehorses with Donkeys ! So we only got Pebbles lah !