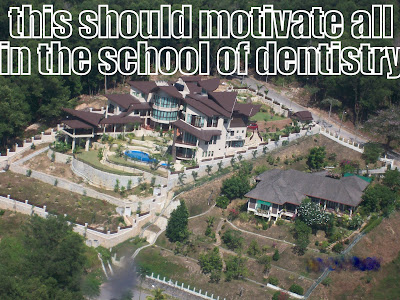 FOR YOUR READING PLEASURE GO TO HUSSEIN ABDUL HAMID'S THE SULTANIZATION OF UMNO LEADERS.
Posted by zorro at 4:08 PM

er, which part of the palace cost only RM3 million?

Bernard - this looks like another "pondok" that we should write about...siapa punya? What is the story behind this 'pondok"?

Selangor state should offer khir RM5million (above premium, way way above premium), then turn his home to an orphanage.

Wow! Which Sultan owns this palace? kekekeke...! This palace is only RM 3.o million? The I offer RM 4.0 million to buy!

Lokk at the security fences....3 layers of fences in front. Must have a lot of valuables to protect.

hello.... this is definitely not x-mb's house a.k.a palace. Still a doctor though, but i do believe that it is not through politics, hard-earn cash

Not as big as that Tiong fella living near the Mines.

Go check Dr. M's neighbour. This will look like a pondok in comparison.

heaven on earth.....will surely land them into hell....why?. In the process of achieving the palaces, they surely stepped on other's head, neck, stomach, hands, legs.....and yes, prick!

i also want to be a dentist.

These are all "protected species " code name-OSA and for your eyes only.

You can say anything you like but nothing you gonna expect.
VIEW AT YOUR OWN RISK.

Lets not be jealous.

To afford this 'palace' the guy has been looking into smelly mouths, mending and yanking out rotten teeth 24/7 for the past 50 years.

Yikes, I don't want to be a dentist. There must be a better way. Yes, I want to be MB.

Send this picture to Toyo's blogsite.

And let's award him the "Sultanization Hall of Fame" Award of the century!.

I am the estate agent who sold this land a few years ago. The thE OWNER IS A VERY HARWORKING MEDICAL DOCTOR WITH HIS OWN BUSINESS. He is one very selfmade Malay man millionaire anyone would be proud of, and with his business he makes others rich too. Right down the end of this road is the Khir fellas house.

Islam teaches that all rezeki must be halal. Wonder if the rezeki to build Khir TOYOL's palace is halal.

This PM is making a mockery of all his talks of cleaning up corruption.

No I don't wanna be a dentist. I only want to join UMNO.

How is it that, that Toyol fella have soo..... much money accumulated during his short years of being a "commoner"...????

I thought since he was MB & a goverment "servant", they weren't allowed to have extra jobs & business. Which "is" against the goverment rule, right..??

Are we gonna get answers or MACC just invited him for tea...??

These people still think that we, the rakyat, are still stupid & blind for them to keep "covering up" their doings......!!

How much more "stupidest" comments gonna come out of their sinful mouth.....??

Zorro... I'm so damn angry. If that "jocker" said that all his money was becoz of years of hard work. Which means his years of MBing is "NOT" for the poor & the unfortunate...!
Get what I mean....?

Uncle Bernard.... whatever ever happened to the person who exposed Khir's ISTANA and then Khir denail the RM24 Million,and then challanged him to sell off his property and to give him RM12 millon as commission? There was no 'next chapter' or news if that "deal" ever got through!!!!!!!What ever happened since then eh eh eh? MalaysianMUDA Lupah again??
KapitanSB

Would like to call him a moron but he's nowhere near it cos he's able to get himself this property which is the envy of even presidents.

Hi Bro HH....now they say KhirTooyo is under investigation by these notorious MACC-(MalaysiansAntiChineseCongolmagnate)All suda Lupah????kah???
I am sure many Taukays queing to owned this Castle 4 RM.l2millions ONLY lah lah lah..
Bro SB

pinsysu you asked,"er, which part of the palace cost only RM3 million?"

I m 54 going on 55 this year. So I guess I will not make it as a dentist even if I stop everything I m doing now and go to dentistry school tomorrow.

Instead I will go to bed every night with a prayer to the Lord:

"Dear Lord, please make me a dentist in my next life - if ever there is one!"

no worries! MACC will find no wrong with the man!

it's a "transformer" palace!!!

who is the architect???!!! he will know the right cost.

wah! u got insider info ah? u mean the toilet bowl in the master bedroom dat's made of pure gold with South African diamonds-studded toilet cover? how to shit in it? sayang leh!

WAH ! I WANT TO JOINT UMNO LEH CAN HAVE SULTANE MANSION HOUSE,WONT QUESTION BY MACC,POLICE DARE NOT ARREST ME IF I AM UMNO PEOPLE.KILL PEOPLE ALSO CAN COVER UP.SO YOU SHOULD HAVE YOUR BRAIN TO VOTE UMNO.ONLY UMNO MALAYSIA BOLEH!!!

Bernard, can you specifically name the owner of this property, before someone sues you.

You have no idea, do you?

CAN'T MENTION TOO MUCH ON MANSION

Anon1039
Did I say who owns it? If you know, why dont you tell me and save me from being sued. Tolong lah!

Salam and good guy;
The bloke's initial is ND. A doctor and I know he also sells a product after using it on himself when he was contracting the disease. The nephew stays near my house. Not known to be involved in politics. Spare the poor man. He's enjoying the fruit of his labor. Cannot reveal a lotlah. No money to pay if being sued.