AREN'T THEY ANAK BANGSA MALAYSIA TOO, THE PENANS THAT IS.

The more than 8,000kg of essential food for the hungry Penans living in the heart of Kapit Division in remote central Sarawak finally reached its destinations yesterday – after four days of dangerous and pains-taking journey across steep mountain roads and deep valleys, reported the Star. 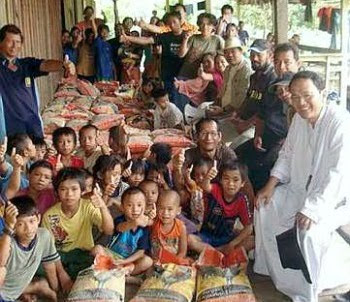 Lusong Laku Penan chief Jati Jarang said he and his people were grateful to God and to the people of for answering their appeals for help.

“For a month, we never have enough to eat. Many Penans from other areas also came here hoping for food. We do not have enough money to buy rice or cooking oil,” he said.

Asked why the food shortage had reached such serious levels, he said severe drought, crop failure and depleting forest resources had affected their livelihood.

I SALUTE THE STAR

The food were bought by church members using funds from kind-hearted donors from throughout the country after The Star highlighted a plea from these Penans who had sought help from the church in Miri.

READ the rest of the STAR story HERE

Last Saturday, I had LULU as my friday Guest Blogger as she featured the plight of the Penans. I added my 2 cens by suggesting that the Army could have helped with building a bridge and transporting food to the Penans.

That of course did not happen! Too much to spend for the Penans?

And glaringling missing from the scene were THE RED CRESCENT and MERCY MALAYSIA.

Will these bodies aid in distributing the remaining 1000 bags of rice, which Fr. Sylvester Ding said would have to be distributed in stages?

AND I ALWAYS THOUGHT CHARITY BEGINS AT HOME.

.......... and the other Anak Bangsa Malaysia who generously responded to the STAR;s appeal.
Posted by zorro at 7:23 PM

BN will treat them as Malaysians only during the election time. Penan are back to defend themselves after that!

A Star Is Born

Glad to read about this magnificent effort to feed the starving Penans. It warms the heart to know Malaysians have not lost every vestige of human kindness after so many generations of "every man for himself" politics. Yet I can't help but feel sad that these problems were directly caused by our disrespect of nature and abysmal failure to understand the importance of preserving the fragility of ecosystems. What a few obtain by way of short-term profits invariably result in the many suffering untold losses and abject misery when nature turns harsh on us - not because she is necessarily mean or petty-minded, but through simple cause and effect. Keep on logging, towkays, and soon the Penan will not be the only ones impacted...

"Too much to spend for the Penans?" - Zorro

Hmmm, in appropriate time deem fit, only as election bait for UMNO/BN!!

Where's Taib Mahmud on this? First there was denial that there exists in Malaysia shortage of food, hunger and starvation then now complete silence from this BN regime?

Mercy Malaysia are always tops when it comes to helping foreigners. They think it is chic to help foreigners. If my memory serves me right, Mercy Malaysia was heavily criticised for concentrating most of their efforts on aiding Indonesia during the Tsunami. I am not surprised Mercy has been recognised by the UN for its huminitarian efforts, which is service to foreigners first.

I thought the star was condemned and Malaysian are advised to boycott the star for being gov tongue.

Anon1029am.... when a naughty boy shares his sweet with a friend doesn't he deserve a pat?

Mercy Malaysia and the Red Crescent Malaysia are missing due to the following 3 error factors:

If they are Malays, or Afghan or Palestinian, hey, Mercy Malaysia will instantly find their MERCY !

End of the day it is the normal Malaysians who will helps.
It is NOT perkida, pewaris, sultan, mahathir , jabatan agama and umno cronies that will extend their hands and helps the poor.And in this case they are the Penans.
Normally the Penans will not ask for help .
Their bn government told them to eat the jungle!
They dont even dispatch a miserable helicopter to airlift basic medications to the Penans!
NEP is NOT helping them , Ketuanan Melayu is NOT gonna help them.

Thank you to all Malaysians and PR bloggers for highlighting the Penans.
And Kg Buah Pala wanted more.

You aware that there is a blogger named gopal raj kumar who dedicated a whole post just for you :P ? Not positive though lol. i think you hit him before when you were teaching.

(on a different topic altogether, if you will excuse me)

I have sent you 2 email (via ktswee@hotmail.com ) re: Officer Lee

Just wondering if in case you do not open your email hotmail.......

Zorro, that naughty boy had better share his sweets otherwise he'll be grounded for months!

Credit should be given to Haris Ibrahim as well. I donated after reading the appeal in his blog, not the Star.

Yes, Uncle Zorro, I have never given a cent to Mercy Malaysia or the Red Crescent. A few of us gave to Father Ding via info given by People's Parliament.