SHOULD THE COW-HEAD DUO BE ISAed?

NO WAY! We are for the total abolition of the ISA, even for scumbags. Besides if Mahyuddin Manaf and Ibrahim Sabri are ISAed we will not be able to get down to the real perpetrator of the episode. The Police intends to throw the Sedition Act at them. That is too lenient!

Section 3 of the Act defines "seditious tendency" thus: "to bring into hatred or contempt or to excite dissatisfaction aginst any ruler or against any government." I remember my friend Wong Chin Huat, sometime ago pointed out that the definition if applied literally would parlayse the democratic system! For example, he continues, no elections can possibly take place without the opposition instigating dissatisfaction against the incumbent government which could hold true regardless of who is in power.There you go.

A such I will go along with my MP, Sivarasa who said:

Legal punishment alone may prove inadequate because it may instead grant the offenders the self-perceived honour of martyrdom. Police prosecutions for unlawful assembly or sedition miss the point completely and are also oppressive in themselves. Any prosecution should only be for incitement of hate and violence against another religion which is provided for in the Penal Code.

I am relaiably informed that the penalty when charged under the Penal Code is heavier than under the Sedition Act. If guilty, they deserve no less.


Charge the two gang-leaders and whoever the industrious Police can lasoo in and in open court they are given the opportunity to defend themselves and possibly reveal to us the puppet-master(S). 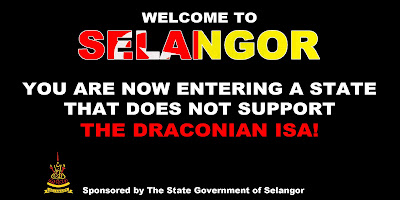 If I read right, the grass-hopper Ibrahim Ali said that one is ISAable if one:

"excite racial sentiment by way of writing, statement or speech so as to cause conflict among 's ethnic groups."


UPDATE: ntv7 8PM news asked its viewers "Should the ISA be used against those who question the position of the rulers, bumiputra rights?" 80% of its viewers said NO!

I agree with you sir.

No ISA, not even against proven racial & religious bigots.

If need to, introduce a new terrorist act specifically for this purpose and have it debated in parliament.

Charge the duo under the penal code, or the sedition act.

Why is it BN does not get it?

The temple is sited directly opposite the huge IWK Sewerage Works. Just put all the 50 demons(trators) in the IWK intake for one day to enjoy the aroma. Then ask them if they can take the shit.

Only the Government has this dire need for the ISA. And for their good reasons. We all know why. And they know we know. They need to retain this archaic laws for self -preservation. Say what they like, their real motive cannot be disguised and justified with words like 'terrorism' and/or 'national security'. The ISA is indeed inhumanitarian from many aspects. Worst still, the men and women who misapplied and abused this bad legislation in current times are even so much worser.
malsia1206

isam has granted them a meeting tomorrow......ini apa cerita?

No need ISA just abolish ISA. The leaders of the cow head must be charged in the open court so that the public can see the truth and opportunity for the cow leaders to defend themselves. Why not.
No ISA. If the gomen is sincere, just do it!!! Charge them tomorrow, mr.AG if you have nothing to hide.

This could be Team A, Team B in umno opera. If so its bad. The rakyat is the pawn. sam@yahoo.com

no need ISA them. just circumcise these demonstrators for the second time of their life should be sufficient and more than adequate.

bet you'll agree on this; no need lashes too!

i) agreed. no isa 4 them. sedition act or penal code.

How can you use ISA on the 2 gangster? That is not right just use thge Penal code la, for inciting racial hatred.

Charged them in court and let the due process of law take place. NO ISA for these gangsters la.

My only concern is will they be charged or not? Now they want to see Hishamuddin and tell him sad stories how they were set up. Look Uncle Zorro, take Holy Communion those chaps got away with it, la,now cow head. Wanna bet nothing is ghoing tohappen la.

No, we have to walk the talk. No ISA unles the Commies come back or the security of the nation is threatened by terrorists or foreign invaders!

Ultimately, the problem will be solved if all parties sit round a table and come prepared to find an acceptable compromise.

I think ntv7 put up a wrong question. It would be interesting if the question were to be 'Should the ISA used against those two who brought in the cow head?'

Zorro said: Any prosecution should only be for incitement of hate and violence against another religion which is provided for in the Penal Code.

You're absolutely correct on this point. However, considering the villain who heads the AG's Chambers, this is unlikely to happen for precisely the reasons you outlined. An open trial could easily lead to the names of the behind-the-scenes instigator(s) being revealed... once again, it's like asking Rosmah to turn herself in for questioning! In any event, STRICTLY NO TO THE ISA OR SEDATION ACT - GODDAM OBSOLETE LAWS!!!

Have you ever noticed that the no. idiot has been vehemently declaring that he still wanted to target Selangor?

What is the catch one may ask?

He is trying his very best to "exonerate" himself from the murder death of Teoh.

It was exactly this sentiment of his that "they" saw fit to kill Teoh for.

What a phoney his is.

Father was a mass murderer,
Son is a serial killer.

You see, the bozos have got themselves between a rock and a hard place on this one. As you can see, the latest posturings are that only the insult or desecration of anything Islamic or Muslim is supposed to be seditious, ISAable, punishable, forbidden etc...etc...etc...Nothing there about insulting Hindus or desecrating other religions by Muslims who do it in the name of defending Islam and their sensitivities.

If you asked Mahaguru, he would provide you with quotes that support the actions of these bozos. That is why the police are until today unable to act on the two reporters who desecrated what you and I hold holy and dear, the sacrament of the holy communion.

The defence for these guys over the cow head incident will once again use the defence they will find in their scripture that Mahaguru has previously quoted in his blog. The police will be stumped on this one once again.

In any case, if they were to hurriedly prosecute over the cow head incident then questions will be asked about how come nothing happened over the Al Islam issue. Rather confusing don't you think? In any case, as far as they are concerned, isn't the fact that they had said that this will be investigated enough for you guys anyway? That in itself is a concession.

I believe the ISA suggestion was a 'sindiran' to these guys as they are the ISA supporters... so.. it's 'you want it.. you'll get it' type

At 1st I was asking, why weren't these "cow heads" ISAed?
Why so much of double standard..??

"NO" ISA to anyone "no matter" what.
Just charge them in court.
Let the police do the ISA on them.

Perhaps "than" their brains will start thinking if it has been worth their while all these years...!!!

There's a specific law that was broken here. So, charge them under it. I fail to see why the ISA needs to be used now. Or, ever.

i started a joke said...

ISA seems to be an anti-opposition tool as BN/umno supporters are immnue!

How do you do?

Not the ISA, the 50 odd Donkeys disrespect two religions. So use the CANE on them. They are worst than Drinking Beer or watching Black Eye Pea. Calling for Bloodshed during Holy Month of Ramadan, Cane is the Answer.

If the protesters had been from pakatan, they would have been shipped to kamunting under ISA at the very moment.This country had gone down to the drain.That katak should be the one to be ISAed for always harping on the same issue to gain publicity.

Yo Zewt....been sometime huh? Me, ok stringing along....riding the wave too.

Zorro have spoken,ISA must be abolished,

My fear is this --- when they do away with ISA, they will invent something even more draconian than ISA in its place

I have a feeling the Barisan will abolish the ISA, but they will replace it with another draconian law, which will be far worse than the ISA.

Why bother with the courts? Take them out and just hang them. After all, we dont have laws in this country anymore. Take the law into our hands.