DR RAFICK RECOUNTS HIS OWN EXPERIENCE WHILST IN THE FORCES 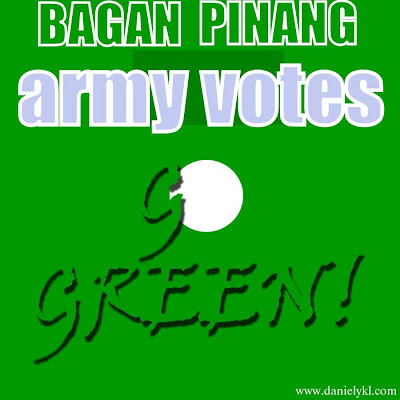 1. I am sure everyone who is concern about fair election is doing some kind of research related to Army postal votes since PR raised their concerns with regards to the upcoming by-election in Bagan Pinang. PR are making some noises because of their concern on the impact of the soldiers votes which based on the March 8th 2009 election and being a former serviceman, their concern is not without merit. Allow me to share my experience of going through 3 elections while I was serving in the Army.

2. Soldier’s votes are very important to the ruling government as we all know that their numbers are significant when they are located in high concentration areas. I am not sure how many remembered that Najib won narrowly in Pekan during the General Election that took place after Anwar was sacked from UMNO. In that year, Najib by countable number of postal votes that came from the Army and Air Force base in Batu 9 and Batu 10 Kuantan.

3. During the same GE, Dato Anuar Musa (now Tan Sri) then lost the Ketereh seat because the airman at the Gong Kedak, which is located at the border of Kelantan and Terengganu, chose to abstain from voting. The camp is unique where it is located right at the border of Kelantan and Terengganu. They live in Terengganu and they go to work by crossing the road which brings them into Kelantan. They votes goes into Anuar Musa area in Kelantan. I remember when his wife complains to me that the soldiers were ungrateful for not voting BN.

4. In Bagan , the impact is significant as the Basic Army Training center is located there. At one time there are easily few thousand recruits and soldiers in the Camp. I am not quite sure up to where the extents of the electoral boundaries are but there are many other Army training centers along the famous PD beach road. Certainly they are concern on the impact. Unfortunately their concern appears to be targeted at different matters.

5. PR is concern that the election will be rigged. They are concern about multiple votes from one person and they are also concern of being accessible to the voters during campaigning. This would be their greatest mistake. I would say they should not be concern about the election being rigged or they are not able to campaign but they should be concern with soldiers being ordered to vote BN as well as specific people will be crossing the voting papers on behalf of the recruit and soldiers.

6. During the GE when Anwar was sacked, my voting rights were denied as the voting paper was not in TUDM Subang but was in Mindef. When I went to the voting center, I was told by the adjutant that my name is not in the list under Subang but was located in Mindef. I was given a number to call.

7. I remember calling them vigorously from morning and finally getting through at about 400pm. The Corporal that answered my call confirms that my voting papers were in Mindef and he said it would be difficult for me to go to Mindef and would probably not make it on time. He told me he can help me to cross the papers. I only need to tell him whom to vote. I told him not to do anything but my gut feeling is that someone had vote BN on my behalf.

8. In Bagan , PR biggest concern should not be about campaigning among the soldiers. They should be concern about how soldiers and recruits would be forewarned and will be ordered to vote certain individuals or certain symbols. Being recruits whose young brain and mind has been thrashed, they will follow orders. They would prefer to follow orders just to get a weekend pass or to avoid being forced to march with 40kg packs on their back.

9. I am not sure how PR wants to ensure that the recruits and soldier can vote without fear or favor. They will go and cast their papers under MAFREL and agents nose but they will never be able to ensure that the soldiers are casting their votes on their own free will. If they expect any of the soldiers or recruits to change their mind based on campaign promises, I can say for sure that they are expecting a big surprise. The only way they can win is they know exactly how many soldiers are there in the camp and they need to find matching numbers among the civilians population to neutralize this numbers and then work triple hard to get the rest of the voters to vote for them. Other than that they need some serious divine intervention.

BORANG 2 WILL DECIDE FOR THE SOLDIER BOYS

UNLESS THEY VOTE WITH HONOR

AND WITHOUT FEAR OR FAVOR.
Posted by zorro at 3:32 PM

I have done an analysis on the electorates.

The postal votes are almost certain in favor to Umno and therefore,even if PR managed to garner 80% of the balance votes, it will still lose.

There is no doubt that the postal votes holds the key to victory for either party.

If the postal votes are being manipulated by top exec military orders, then we should do something about it.

Perhaps Peoples' Parliament can organize an on-line protest and then petition the EC to make it compulsory for only registered soldiers to go and vote at the polling stations as applies to all other citizens. Let's het all the on-line newspapers to participate.

Like you rightly observed we are not on Defcon 1 alert or something, nor are Indonesia or Thailand going to launch an invasion upon us come voting day at Bagan Pinang!

It's time to take the battle to the EC who close 1 eye to non-democratic practices!

Are our soldiers whether under training or in the regular army that dumb and brain-dead or brain washed that they cannot think for themselves what is their right as citizens of this country?

Whether they vote for UMNO/BN or Pakatan Rakyat, it is their right to choose but to be coerced and intimidated into voting for the UMNO/BN is outright stupidity.

During the past bye-elections and general elections UMNO/BN had bought votes by giving money and other incentives. Yet the rakyat chose Pakatan Rakyat. Those soldiers in Bagan Pinang constituency can do the same.

Agree to vote for UMNO/BN but vote out the corrupted and arrogant UMNO/BN candidate. Show UMNO/BN their days are numbered.

If the army postal votes are in favour of Pakatan Rakyat, it would be a resounding slap for Najib and his 1Malaysia and 1F1 crap.

Only UMNOputras and the gullible Malays believe or forced to believe in it.

my only comment is if they trurly are solders they should have the courage (guts) to vote with their own free will. pr is having a hard time even trying to talk to the elections commission not to say the indivigual voters .

if they truly 'soldiers' = taking orders from the top !!