YEH BER DA BER DO I WON, I WON, BUT A TASTELESS WIN.

YESTERDAY I accepted a brunch date with a former student, Siva, of Sek. Sultan Abdul Samad. Among other things we talked about the cow-head. I told him that once Hishamudin declared that he was meeting up with the Section 28 residents he would short of sweeping everything under the carpet, he would exonerate the protestors. "He seems a nice fellow, Sir." Siva volunteered. "Yes, if you only read the newspapers," I replied. I wanted to wager a bottle of Belvenie, but since Siva does not drink, I replaced with a lunch at Kana's. He asked me why I was so sure. I told him that the UMNO stink was all over the incident, more so because of the Take Beer banner. I was at Permatang Pasir when UMNO having been hammered from all directions by PAS in the run-up to polling day, finally set about to to ridiculing PAS familiar TAKBIR.....often heard punctuating speeches at ceremahs. That was how low UMNO sank to. 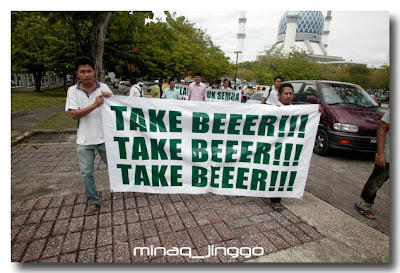 Today it was confirmed by Malaysiakini HERE and Malaysian Insider HERE. Siva called this afternoon to set the date for my free lunch at Kana. I told him to let it pass as it would leave a bad taste in the mouth.....winning because of such a wager.

Zorro Bhai if you do come to Ipoh again...I would like to take you out for some malt...whatever suits you. Me I simply love the Guiness Draught
That is if you will want to spend some time with an unknown like me.

A little diversion...if the vaccine for the A-H1N1 or swine flu virus is available in Malaysia and there are calls for mandatory vaccination for all Malaysians, would you take it?

There are many reports of the fatal effect of the vaccine, with medical personnel voicing their objection from taking this vaccination.

Care to voice your view?

Look , what they have done to your intelligence ?

To me this whole thing seems to be a Silly Joke-strollers.

Yeah, I know how it feels! Sometimes you just hate your self being right!

"I told him thst the UMNO stink was all over the incident...."

I was wondering what those UMNO thugs would bring this time to Perak SUK stand-off on 2Sept09 when they provoked, harrassed and chased PR Lawmakers all over the place from Perak SUK to Democracy Tree to Heritage Hotel where the Perak State Assembly sitting finally took place.

It is indeed disgusting.

The minister talking to the 'protestors' when investigations are being conducted by the 'super fast' and 'super efficient' PDRM.

No minister went to talk to Kugan, Francis Udayappan and the others who later died in police lockups.
They were just suspects, not even criminals - unlike these fellows of S23 Shah Alam, whose acts and vulgar utterances were audio and video recorded.

Is this minister actually giving the message to all and sundry that the protestors have to be 'set free'?

They did not actually mean harm nor instigate?

And the Indians there also did not like the relocation? Ah, so there are Indians too in S23 Shah Alam.

But no Indian participated in that 'cow head' protest? A case of Indians playing out the Malays?

Anyway where are they (Indians) in the important visuals with the minister? Too dark to be noticed? The minister could have asked for extra spotlights to 'bring out' the Indians too in the visuals.

The real story is is the U-tube postings. So easy to tell what it was all about.

And here is another blog which has its own interpretation, which also 'exposes' more on the people behind the incident.

Just because someone high up there wants to showcase stupidity does not mean we have to adjust our IQ accordingly to that same frequency.

In fact these type of 'leaders' are going to be a real headache for the new 'KPI' full minister who reports to another full minister.

We too know how to interpret, make decisions...and pray to GOD for an end to all this type of nonsense - very unbecoming of a party that has been ruling for more than half a century.

Yes sir, my father was an umno man, couln't stomach with umno nonsense voted PAS in the last election.

The 'Take Beer' episode will sure backfire on them.

At first I was not really disturb by what has taken place in Shah Alam 23.Because the people and especially the Hindus would react rightly to what were instigated to them.
But as our HM responded to the incident, I am shocked; sadden by the attitude and mindset of our national leader.
They are out to protect the guilty but condemning the innocents.
They have set the mind to make it an issue created by the Selangor PR governing inability.
But I have my laugh on the other side, as I ponder on what they do and what were in their mind. How shallow are our leaders mind and their reasoning. What were in the mind of these people, we may guess. What they said and do, people can see.
WE are to be very careful, because they are willing, capable to do anything for their cause.

What do one expect from the brain-dead pondan minister. I said it before that he's unfit to be a minister. The asshole is nothing but a shit stirrer and a closet racist.

Kerismuddin is trying his best to portray that he can be better than his predecessor, the dimwit alblur.

What this numbskull fails to realize is that he is giving the wrong signal to the extremist in UMNO to use anything and everything to incite racial and religious hatred.

By condoning such a vile and callous act, this stupid fellow is not only bringing shame to the country but also to his moderate father.

Even KJ, the UMNO youth leader seems to have a better insight into what is happening than this medicore cousin of the PM.

It is high time the UMNO leaders learned to behave like national leaders than to act and speak like kampong jagoh(s).

I think we all know that there is a master plot to take S'gor back...and I would bet my last ringgit that this denial by the 'homeys' minister is to stoke further the tensions.

Please zorro...tell the Pakatan upper echelons to beware of any possible attempts to use racial tensions to take over the state govt.

no way near Johanian. talk like shit, smile like shit, Hisham is Shit. gotta pity his family, mom and his dad having shitty son like him.

Hisham is no brainer, full stop!

Seeing that picture of yours with the mosque in the background..reminded me I got a few more cans of Heineken in my fridge...So I am now going to "Take Beeer"!! thank you guys!!

Check out this site..see who holds the cow head..its proven. Now we know why no action taken.

Well did you expect anything else from people like these?

They are just manifesting more votes to opposition....with all their -backfired- tactics

However, this issue does leave a bad taste in all our mouths. HE IS THE HOME MINISTER for crying out loud and he took a vow to safe-guard the country from extremist...LOL HE IS THE EXTREMIST!!!! So who going to arrest HIM??

Not 1 Malaysia, his moto...Divide Malaysia!!!

As a student reading the racist comments that comes out from the bloody mouth of a low IQ home minister, it is no wonder Malaysia is well-known all over the world for all the absurdities those politicians has commited.God please help my country.

I wonder why they spell Beer as Beeer ..., are they trying to Jeeer? Or simply a Cheeer? (This is the output from our esteemed public schools) Can't even spell a four letter word properly, how to take them seriously lah.

to dap and the liar bastard lim guan eng you will pay big time for injustice .you are nothing but a bunch of scums ,you are not a multiracial party ,dap has always been a chinese party and this is how the true colours of the chinese !!!!you majority of malaysia chinese are SCUM!!!

Bro Zorro,
The result of the cow head incident is excatly expected by the Rakyat.
The cows which take part in the cow head demo are the UMNO ministers paid ass lickers. Most probobly by Toyol or Najis Al Tantu.

So now the UMNO ass licking blue dogs and the Mooh Din keris must cover them at all cost.

The cow head is coming soon. The cartoon for "Suicide in MACC" is on
http://picktotell.blogspot.com/

I just dont know what has been happening lately.The home minister without any conscience on this holy month of Ramadan is proteting these ruthless protesters who are themselves inciting racial sentiments and hatreds.Just imagine these protesters are from UMNO and a few are the youth chiefs!I just read that the balding Mukis is joing them in the sinking ship.

konon-nya kerismuddin said he is like his dad and grand-dad.
which part ahhh?

Latest cartoon on Dancing with the Cow Head and Suicide in MACC.

You used to teach in SMK SAS, PJ? I used to study there...


too mired in the pot of feaces called UMNO. whatever good he had learned during his school days has been contaminated and alma mater should discard such stinking material before the school is ashame of producing such society dirts.

Told my DAPSY colleague, we should do a demo opposite them next time with the following banners

"Kamu hina diri sendiri"
"I'll take the beer!"
"My son went to a cowhead demo and all I got was this lousy banner"

how much lower does umno wants to go?

now we know why isham rcommend to his cousin to keep musa....with much shit dripping along his way, musa is too hapless to react against umno's conduct....