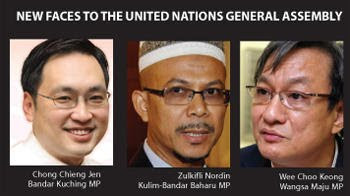 An SMS alerted me to the fact that my friend YB Wee Choo Keong was going to UN General Assembly. I replied: What for? The reply: Read MM. I was happy for Wee though.

I read MM online this morning.

Dang! Wee was having as traveling companion the Bar Council buster who says for him it is Islam first and PKR second or something of similar strain.

My knee jerk reaction was, UMNO is wooing. But why would they woo these three. They cannot initiate any hopping. One is , one in Kedah and one comfortably in Wilaya.

Or was UMNO rewarding? Ah, maybe because Wee recently threw a pebble asking PKR to check out some characters in his former DAP. That caused some ripple that cascaded and resulted in multiple finger-pointing,and investigations of DAP aduns. That of course created some history of sorts. Zulkifli of course threw a boulder into the coalition that caused a whirlpool, kind of. I am not privy to what the DAP guy from threw to qualify for this trip.

But then again if it was a trip for the Opposition, how come no PAS was represented? Two PKR and 1 DAP made up the traveling trio. Selective Selection?

That is not typical of Tan Sri Razali, one of our most highly respected Diplomats who was untiring in his efforts to secure freedom for Daw Aung San Suu Kyi. If it is TSR who selected these he would have done it right by asking the relevant opposition parties to select their candidates. 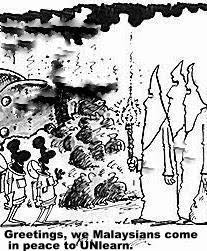 So it was not TSR who handpicked the trio HERE
.....and Hiew King Cheu (DAP-Kota Kinabalu) is identified and not the above from Sarawak.
Posted by zorro at 5:56 PM

The choice to send 3 Opposition MPs to the UN is UMNO's ploy to present to the world that it is a democracy and therefore recognises the Opposition as a vital part of the system. What happens at home is of course very different. On the other hand, you may be right. It may be a sweetener to induce them to "hop". Time will tell.

"Selective Selection" it is! Nothing so new really. Soon they will do the LeeLamThye Limbo Rock!

Bernard, read what Anifah Aman has to say about his decision to send Opposition MPs to the UN by following this link :
http://www.mmail.com.my/content/14125-anifah-opposition-mps-won%E2%80%99t-disappoint

Ah! But these 3 mouseketeers possess the secret recipes that could shitstir PR for a good licking. 2 of the shitstirrers had demonstrated their prowess and the 3rd mouseketeer from the CAT land, and believe you me, could stir up the mother of all shit upon DSAI's grandplan assault on the CAT land.

This is nothing new.
And there is a hidden agenda - I suspect.

Remember the time when Dr M also included Lee Lam Thye in one of his overseas trip entourage?

And after that what happended?
Lee left DAP and gave such flimsy excuses, that DAP could still ride the waves then and remained relevant.

Lets see if these guys will fall for the baits of BN.

I think this cheap publicity seeking scumbag wants your personal attention - http://takemon.wordpress.com/2009/09/04/zorro-truly-unmasked/ whose stupid tirade has also been quoted verbatim by hantu laut at http://hantulautan.blogspot.com/2009/09/is-this-true-of-zorro-unmasked-aka.html

When they have nothing else to go on they will use racism. Sound like familiar tactics? Anothe UMNO blogger in disguise?

u need to fix your link

DAP Chong is a good man, I can't say the same about the other 2. One is an extreme and the other one, well, because of his big mouth, Teoh Beng Hock got called up by MACC the rest is history.

Shank, this scumbag has been baiting me for close to a month. He comes in as anon and drops his url. for readers to visit. It really does not bother me because I am and was never what he accuses me of. My students who schooled with will will attest to that.
Thanks for you faith in me. Cheers.

There is more to it!

1st - for the Kulim wonder, this is another kick in the BN direction

Bearing in mind Rosnajib r dying to go to the White House so can U smell a JJ touch here?

Are you sure you are not pulling our legs? I don't know about that Kuching fella, but that ass Zul Nordin and the other ass tikus Wee? No shit? Man, I always knew they had been bought, but now it is in the open. Hassan Ali, Zul Nordin and Wee should ALL be sacked from Pakatan.

"Problems arise when you put your own agenda first, rather than your country’s. When I’m out there (overseas), of course my country will come first,” Wee quoted in MM.

So whats he going to say on the subject of Altantuya if Mongolia were to refer to it?

So whats he going to say about deaths in detention?

Whats he going to say of endemic corruption?

Whats he going to say of rule of law?

Whats he going to say democracy is?

Whats he going to say of just about anything?


And then when he comes back he going to do a Lee Lam Thye?

as an aside, whats happening to malaysia-today. cant access again! BN evil at works again? Darn this 1Malaysia stuff.

try the alternative suggested by hawkeye !

Zulkifli Nordin is well known for being the UMNO linked guy and is firmly planted to create the ruckus when and where necesaary.
UMNO only need to pull the trigger and he will play their tune.

Wee Choo Keong is famed for his losing the BB constituency to BN/MCA. His political antics in DAP caused him to abandon ship and jump into unsuspecting PKR. PKR beware ! He will not stop his subversion and is under the panel control of UMNO/MCA.

Well, we need to monitor YB Hiew as his track records need to be verified with time.

Only time will tell but it may be too late as these guys could amass huge fortunes for their part played in the political sandiwara.

You forgot to take your medicine, Unker?

Your paranoia is showing !!

While you are getting all heat up for YB Wee, your hero, Lim Guan Eng has openly predicting that umno will win the election of Bagan Pinang

Unker Zorro, if there is a necessity for being a paranoid, this is it

If that isn't something wrong, I don't know what is

Wee Choo Keong is now a national joke. He makes me throw up.

HeheheHe! If I'm asked for my comment on Bagan Pinang, I'll be just as sarcastic as LimKitSiang's son! That will help soothe their nerves abit. :D

zorro, the sale of zul nordin's soul to umno was signed n sealed on the 2nd week of ramadhan last year (that's more than a year ago).

He badly wanted to retain his Kulim MP post amidst the court petition.

If PKR or PR do not realise this yet, then i'm sorry for them.

Hasan ali is the mother of all trojans. Umno's intelligence say "the only way to bring down Anwar is through Pas. Pemuda Pas has also eaten the bait. Nasha and Hadi...???

I have no inside information abt the other two jokers chosen.