YESTERDAY, in my posting asking MAFREL to bare their fangs, I wrote: Conversations with army personnel, present and past have revealed that seldom or never have they voted as army personnel. Evidence is available where a voter voted under postal vote and on polling day he is in his home-town voting as a regular voter. Army personnel have two ID cards. 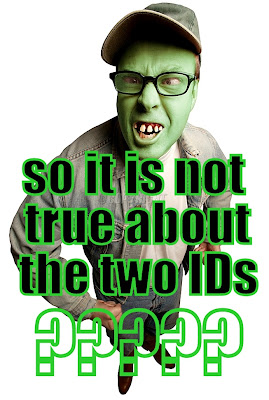 I am in no position to dispute Another Rakyat's comment.....I can only offer THE FLACID MIND'S posting.

He posted this to the former EC Chairman:

You as Chairman Election Commission of Malaysia, please explain this.


I suggest you go HERE to read the rest.

If they surrender their ICs, it is at the govt disposal to do as they wish with the ICs. Hell.

Look at it this way. The Defence Ministry would have a register of all personnel who are currently serving in the Armed Forces. These include the main 3 components of the Army, Air Force and Navy. And all the other sub-categories like the police, FRU and other enforcement agencies. Look at the total number in all the 13 States. Must be in the humdreds of thousands. And the majority are probably registered as voters (no surprise here). Meaning the same equivalent number of ICs which would otherwise have been supposedly 'inactive' or dormant for the duration of their career. Many served out until retirement. The HUGE potential of these ICs being manipulated in the electoral process becomes a concrete reality which cannot be ignored. Especially with the negative track records of the Election Commission when there are even several complaints of missing names, deceased voters and 'foreigners' among civilians misplaced or included in the electoral roll.
malsia1206

Crooks, they are... cheat the rakyat all the time... Angry now.. need beer to calm down..

I concur with Another Rakyat. I am a 22 years veteran of the military. You have only 1 identity card at anyone time.

If military, their card. Polis, their card and others like you all the MyKad as we know it today. When we retire, we return Military card and are issued normal civil ic MyKad.

I have 3 different ic number all included in myKad. Old number, Military number and latest number as in MyKad. There are Three (3) numbers but ONLY One ID Card at a time.

Now to the sample provide in " THE FLACID MIND'S" website. My explanation and probable reason are as follows.

1. That Person from Tumpat registers there as a voter in Tumpat before joining Air Force (Thats an Air Force number in the sample).

2. He later joins the Air Force. He surrenders his MyKad and gets Military ID. Transfered to Butterworth Base.

3. Butterworth Base registers him as voter in that area using Mil ID. Tumpat registration not cancelled. He cannot vote there (Tumpat)cause no MyKad.

Thats how I see it. Anyone else has a better answer? Thank you.

Once again, caught cheating. But SPR has been an accomplice to massive gerrymandering since the early 1970s. They've had plenty of time to finetune their dishonesty. Only a 100% voter turnout with 80% voting Pakatan Rakyat can wipe out BN in the next general election - but I'm beginning to doubt if there will be another general election if we let things slide another couple of years. Something must happen in the next few weeks that will compel Najib to call a snap election. Nothing short of a full-scale mutiny in Sabah and Sarawak will save Malaysia now...

Guys,
For starters, let me confirm that it is 100% possible for a member of the Armed Forces to vote TWICE (once a a postal voter and the other as a civilian) in any election. If you would have noticed (with the case study - Mr Hazely Razin), the ID card number is different in both the search result with SPR. Thus a person can vote as postal voter where he's based, 1 week before and vote at his hometown on GE day. All Armed Forces servicemen carry an ID called BAT C10 (only one ID) but their civilian IC Number (NRIC) will be recorded at the back of this BAT C 10. The purpose of which is to enable you to do your banking transaction, JPJ license etc that was still recorded under your civilian NRIC number (before you joined the service). Technically, it's 100% possible but whether a serviceman would do such a thing is anyone's guess. Normally, Armed Forces personnel will not be able to vote in their hometown as they will be stationed on active duty where they're based. But I guess, you still can beat the system if you want to.

Given the comments made by posters in this thread, I am a little bit surprised that MAFREL has not made a larger issue of this or publicised this seeming loophole in the electoral system.

If they were not aware of this, then they haven't been pursuing their mission with enough passion.

If they are aware of it, then please suggest a solution for the short and long term. That would be a great service to the rakyat Malaysia.

Not trying to deflect from MAFREL's diligent work at elections but this is an area where MAFREL can really effect change.

I just checked the SPR website. That old registration of Hazely Razin in Tumpat no longer in the SPR system. Only the one in Butterworth valid.

Antares, I believe it's a case of the kink's in the system rather than cheating. I could be wrong.

Will the polling officer issue you the ballot paper based on the secondary number listed on the back of the BAT C 10 rather that the primary number on the front?

Zorro, that your task to find out!

Once upon a time, I also voted by post. It was not my choice. My late husband brought home an envelope for me to cast my vote before the actual date.

I don't know if this is still being practised.

If this is the case, then they have the postal votes of the military personnel and their spouses.

It is very clear.

The surrendered IC's are being used not by Hazely Razin but rather some Nepali or Bangladeshi who is voting on behalf of his Master.

U have stumbled on how they are doin their multiple voting.

Actually Mr Hazely is the BAT C 10 holder (Military ID’s). By law he just have one opportunity to vote accordingly to where his name registered. But for his case, he’s got two…lucky. No wonder…he’s not alone actually. There is so many military personnel have that opportunities. As post voter they have to vote BN either they willing to or not. But when they take the second opportunities at their hometown (if they got green light because of they not MyKad holder), definitely they will vote for opposition party. For Malaysian info, 70% of Malaysian Armed Forces personnel are pro-opposition supporters. So, in my opinion… let it be. Why it happened? Before they joined Malaysian Armed Forces they have passed several number of general election. By right when they joined the armed forces and registered as post voter their name automatically deleted from former or last SPR list while they in civilian. It should be like that. We should condemn SPR.

It's really bad if this kind of case will let somebody from any party, either government or opposition to make use of the name for "UNDI HANTU".

may I concluded that: Army, Police & etc they have their "Undi Post" for BN and same time their IC (regular IC) is used by someone to be "Phantom Voter" which is thru fully cover organisation? dont you?

Can anyone explain how postal VOTE works ? Suddenly, Pak Lah, Najib, KJ got so many postal VOTES ? How do we know these postal votes were registered at those stations ? Would you care to explain in VERY Details how frauds could be expedited by these postal VOTES to keep all BN ministers in power for so long ?

It works both ways. During the last GE, my friend who was in the polling station noted that many postal votes were actually voted the oppositions.

putting aside the debate on military/polis personnel, how sure are we that other ordinary citizens do not have more than one ID card?

I agree with you. wink wink.

why vote one week before the country votes?

if that can be answered?

why forced the family members to vote for under postal v0otes?

are they ALL inside the jungles chasing after the CT's like CHIN PENG NOW?

MY MY MY SO MUCH OF BULL SHIT...ATM

ATM - ANOTHER TULAN MACHINE OF UMNO TO CHEAT!