THE BIGTIME BUYING OF VOTES HAS BEGUN. 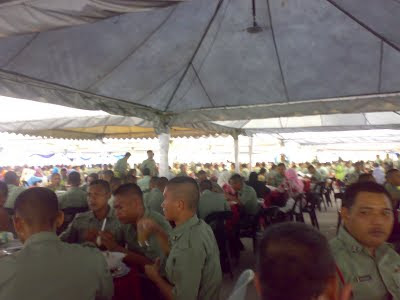 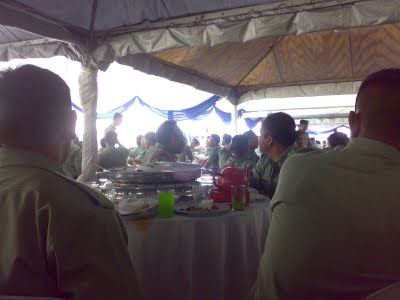 PAKATAN RAKYAT holding a ceremah in the Army Camps is of course taboo. Just too bad. BN of course can. The last time a Camp Commandant allowed the opposition to hold a ceremah in his camp, he got booted with a transfer.

You can get away with murder in and outside custody; you can build RM24million mansion extrating teeth;  you can be promoted from a major to Lieutenant Colonel by hoisting the UMNO flag in your house. Just too bad. BN of course can. What is it BN cannot do to sustain their control.

In BN semua-nya OK. I am just wondering what PD folks will react to this. The PM, fishing/buying for votes, will rename Port Dickson as Army Town. HERE, If you are in power anything is possible in this country. Jalan Birch was renamed to Jl Maharajalela. The murderer takes over the murdered road. Sheessshhhhh. And now Port Dickson histrory and heritage will be snuffed out with the stroke of the pen to gain votes for a recognised felon. Province Wellessley, Butterworth, Port Weld have been thrown into the dusbin of history. Hang Tuah and Hang Jebat, both chinese muslims have been banished from all history books.Great Balls of Fire! So interesting and intriguing. Like I always maintain, HISTORY IS WHAT HAPPENED AND NOT ALWAYS WHAT IS WRITTEN!

For the latest updates in PADANG PINANG go visit BAGAN UTAMA.
and HERE

He has been eyeing the the Petronas candy jar for a long long time and will not expect a 'NO' for an answer. The guy will bulldoze his way, has no scruples whatsoever, evil and corrupted and no one can stop his greed, not even Altantuya!

Only the rakyat can upset him with a 9-1 score. It's not impossible Bagan Pinang, let's do it!

.....err, another problem for Pakatan Rakyat at Bagan Pinang, again from the direction of that overflowing jumbo shitpot, where else!

why are you always complaining ;)

SPR is doing their job what? They already said non-PAS Pakatan component parties cannot put up flags. Now that's what matters. The free flow of goodies given by BN at our expense is just... developmentma.

Similarly after Moohyiddin told us getting disbarred is as minor as a traffic ticket, now Kerismuddin is telling us you have good and bad guilt. Does not depend on the offence, it simply depends on the political leaning of the offender.

Lucky Mugabe does not know (yet) or he'd quickly apply for BN membership to be washed of all his "bad" guilt.

Correction. History is His Story.

A past event was written by a person, changed by another person, and is still changing, because all the witnesses have died.

Surprisingly, no one has thought of writing the History of the Future. It starts with planning, forecasts, predictions....., oh it's a long story.

Everyone knows that Isa is corrupted and proven by umno themself. So the question is, will the voters want a tainted rep or otherwise will reflect clearly on the VOTERS themself. I hope it's not because of a few goodies that will decide their future.

isa got away for corruption is nothing nothing, well ns is also famous for mb tnat got away for murder less ns citizen forgot........

FEAR OF A RAID AFTER BEING PAID

"Everything has a price!" has been often said
In some cases money has actually been paid
Being justified as a matter of simple trade
Yet there's constant fear of being caught in a raid