WILL THE EC WIN BAGAN PINANG FOR BN LIKE IN BATANG AI? 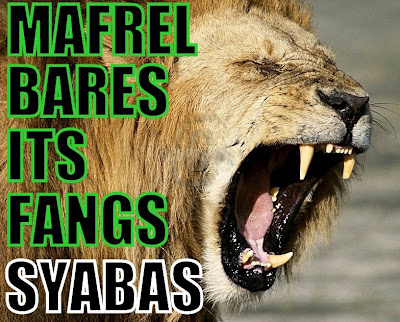 AS it appeared in NSTonline:

SEREMBAN: Malaysians for Free and Fair Elections (Mafrel) will meet the Election Commission soon for permission to observe the counting of postal votes in the Bagan Pinang by-election.

The election monitor's deputy chairman, Col (R) Shahrudin Othman, said Ma-frel was allowed to observe the voting and counting process in the last general election, which "helped to ensure there was no room for any manipulation by either party".

Although Mafrel would be allowed to observe the postal voting in Bagan Pinang, the EC had yet to give it the green light to be present during the counting.

"We are hoping that the Bagan Pinang by-election will be the first where Mafrel is allowed to be present when the 5,171 postal votes are counted.


"If all the parties involved have nothing to hide, then I don't see any reason why we cannot place our people there to observe the counting. This will ensure a clean and transparent election."

Pas had earlier voiced concern about the postal votes in the constituency and said it would meet the EC on Monday about this.

Pas state commissioner Zulkefly Mohamad Omar said: "We want to ask the EC to allow representatives from the contesting parties to witness the postal voting process and also accompany the ballot boxes to the voting centre."

Shahrudin said Mafrel would station two people at each of the eight polling stations in the by-election.

"Apart from this, we will also have mobile units to observe supporters and other activities outside the polling stations."

However, not all bases are covered. The EC still has to allow the supervision of vote-counting in the camps and to allow Mafrel or Pakatan Rakyat reps to accompany the ballot boxes to the main counting centre. All will recall that at the Batang Ai by-elections, the votes were not counted at the polling centre and no PR reps were allowed to accompany the ballot boxes.....and what happened?

THOSE BALLOT BOXES JUST WENT MISSING EITHER INTO THIN AIR OR INTO SUNGAI AI!

That was when PR won 2 Bukits but lost the Batang to the Election Commission.

Uncle Zorro
Bagan Pinang Bye-Bye Election is not about Batangs or Bukits, like Batang Ai and Bukit Gantang etc.

Its about Bagan and no way, BN gonna win this Bagan since its not even look like, sounds like or even smells like Batang, but Bagan.

Armed Forces are wise enough with Kulop-tion by UMNGOK and they'll not vote BN this time. Moreover UMNO is no longer seen as 'protecting the Malays' but now more seen as 'Incestors'!

Let's see if EC dare to offend BN by allowing Mafrel or PR representatives to witness the polling and counting of the postal votes?

EC Chairman said the postal voting would be conducted under strict security and would adhere to procedures.....he's joking right???

Sure, voting is done under strict Military security. No civilians allowed anywhere near 50 metres.

The sea pirates did not move to the South China Sea as reported. There're still at the Malacca Straits near Telok Kemang.

Dear Zorro,
It is SO OBVIOUS you are a PR (Pembangkang Rakyat) supporter.
Not to worry.
PR have already ALL the EXCUSES (Postal Voters, Phantom Voters, Buying Voters, etc.)for the BP by-election.
Just remember that you cannot win all the time!!!
You are still POLITIKING!!!

Charlie Oscar....took you too long to realise that I currently have a PR bias. If you do not understand political activist then you should be visiting other blogs on gardening or cake-making.
Of course you cant win all the time, but a reduced majoirity for BN is already a victory.
Sheesssh....of course I am politiking and not licking.
You remind me of stays who stray into lampost and do what most strays do at lampost....put down three (legs) and carry one.

Info from inside the camp in Bagan Pinang said that UMNO already gave RM5000 for each camps before hari raya... and more RMs are comming...

As long as the SutuJamban Pilihan Rasuah Malayees is not cleansed up, the election in this country wont be a clean one.

The officers are all well paid during this time where this is the only time they can get some extra $ in four figures.Free money come come. Siapa tak mau.

The obident servant and faithfull ass lickers of UBN Regime.

They will kowtim with the army commanders in all the camps. The Menteri Pertahanan will do a open house just for the soldiers to peace them.And take the chance to campaign.

The EC will say its tugas rasmi menteri and not election campaign.

So far, our new Defence Minister had created history by sending soldiers to be on duty at a by-election, and soldiers actually forcing someone to take down a party flag from a house at another location. Honestly, when it comes to postal votes involving the army, I have no confidence of his impartiality after these two 'first's.

Good one to Charlie Oscar, Zorro and he so well deserved it. Now, I think he is licking that part of his anatomy that can be seen by all when he puts down three and lifts one...oooh, you cut and sliced him good with your "most elegant rebuff"!