CAN A PINANG TREE AS CANDIDATE WIN BY POSTAL VOTES? 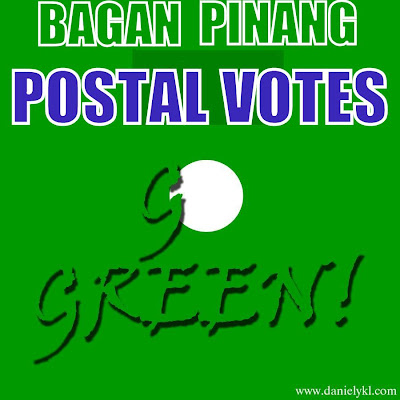 THE answer according to HANTU III is YES, invariably and inevitably, UNLESS the EC allows

a. Postal voting in the camps to be done on the same day and counting to be done in the base(s) OR

b. The Police and Army IF REGISTERED in the constituency vote at polling booths like all ordinary citizens.

Election Commission chairman Tan Sri Abdul Aziz Mohd Yusof has given his assurance that phantom postal votes would be impossible in the Bagan Pinang state by-election, adding the postal voting would be conducted under strict security and would adhere to procedures.

What he meant by strict security is anybody's guess, unless he is allowed spell them out.

What procedures he would adhere too is also a motherhood statement. These procedures have been questioned endlessly.

There is also the perception that postal voting is not transparent and flawed, especially having to cast their votes a few days ahead of the actual polling date. Actually, there is no reason to do this, especially if the postal voter is located in the same constituency where the voting is held. The voter can cast his vote like anybody else, and his name checked against the nominal roll usually prepared by the Armed Forces Record & Pension Directorate. If this is done, transparency is upheld and there will not be any accusation that absent voters ballot papers are marked and place in the polling bags.

Many have questioned Postal Votes. I was hoping MAFREL will say something, or I might have missed their take.
Posted by zorro at 2:08 PM

Postal votes are the BN trump card and they will do all they can to win an election. And the EC chairman will ensure that they stay at that. Why, his post-retirement extension depends on it.

The EC should seriously consider the suggestions in this blog..if not even if BN wins the people om Malaysia will cry faul..not fair..postal vote abuse etc..etc..

postal votes are hugely vulnerable. I know, I was one vote for 23 years.

Zorro,
Like I say before, don't fret. All we need is a biblical confusion among various enemy camps & voila. In Kings, the Lord confused by making the enemies of the Jews finishing of each other. We just got to stand firm behind the line awaiting to garner the prize
Nightcaller too has this premonition too. Of course, it would go either way. But victory is not impossible

if u need some helping hands (over weekends) in bagan pinang re this by-election, pray tell..

Maj Rama, we need all the help teh ex Armed Forces can give. Glad we knock glasses at NPC last friday.Cheers bro.

4AKYAT...IF YOU are in PD, we can use help on polling day. Email me at ktswee@hotmail.com

umno has this in their mind since pre-merdeka. Their propaganda machine has done these wonders, obviously. However, today, umno and their BN cohorts have been extremely exposed....pants and underpants taken off!....and yes, they have no balls!

the 5000+ postal votes are for them alone?. What are they thinking?. Our MALAY REGIMENT BOYS are mere BUFFALO SOLDIERS?. The boys knows well enough today who are doing their job well and those socalled leaders are EATING everything passing their way!.

BN/umno can TWIST the postal vote and make them win. But can they face an ARMY revolt if the boys DISAGREED with what is being said of their voting pattern?.

Are we going to see a REAL HEAD-ON in the army camp once the results are announced?. I know that PEKIDAs are already infiltrating the police and the army. This is actually a big thing going on as many malays in the police and the army are against PEKIDA as they are acting as GANGSTER MELAYUs...with backings and well covered by the umno divisional heads.

WHEN 15+ PEKIDA boys whacked a policemen because of a woman in Malacca recently, the police's friends went back to whack the pekida boys....few ended in hospital....the the pekidas in the police came head on with the non-pekida police boys. According to my malacca friend, it was very tense until one umno man (pekida's leader) from the CM's camp came to intervene.

umno may meet their real challenge in the army camp....and pekida can be the target of those unsatisfied of their actions thus far.

NOW WHERE IS THE MONKEY!!!

Obviously you never had been a soldier

And obviously you never know what military is all about

Security is obviously an issue, or there won't be any pagar surrounding military bases

KALAMBONG, can you read? A Brigadier General said it:Actually, there is no reason to do this, especially if the postal voter is located in the same constituency where the voting is held. The voter can cast his vote like anybody else, and his name checked against the nominal roll usually prepared by the Armed Forces Record & Pension Directorate.

My colleague hubby who serve the Navy once said..many fear of pangkah the opposition. they were afraid their votes revealed & they will be downgraded.
What the heck, they just pangkah BN & they dont loose anything.

The 'system' created by umno is at its maximum now and we are sometimes hapless to think about 'undoing' this MAFIA-LIKE control!....

To that anonymous who says that I gain and become a class F contractor,

I am a Chinese and how in the hell I can become a class F contractor???

All I gain from military, aside from discipline, is the knowledge to kill

Georgie Bernard,
This is your snooze ball BBQ chef. May I rest assure you that polling in an army camp, regiment or cantonment will be professional to the letter. Officers cannot proselytize or canvass for any faction coz there is an old Armed Forces Council Instruction that forbids it. The polling bags will be handed to the EC for counting. This is the critical area where bags can be switched with pre-marked polling bags containing fraudulent votes for BN.
Keep two facts at the back of your mind about the Army. Firstly, there is residual resentment against DSAI coz he removed the Forces tax-free beers from the NAAFI (now Pernama) and introduced heavy sin tax on all alcoholic beverages when he was MOF. He did it for his ABIM and bigoted galleries. The removal rendered the Warrant Officers & Sergeants and the Officers Messes to be destroyed of our tradition of a sense of common mission by living in the Messes which are now empty. Officers go out to the Karaoke Bars and other pubs and mix with GROS and they can hardly afford it with their small emoluments, DSAI failed to do a little research and was unconscionable towards the fighting men. Secondly, in every major unit, we have a Nazir Agama (Ulama) and an Uztazah. They are very well selected from the best Islamic varsities. They are NOT besotted by the bigotry of the Tantawi character of PAS Youth, Selangor.( The anti-Beyonce hypocrite). Most of them have a broad outlook and full of compassion coz the Army is multi-racial. They can work for or against BN. It is more than likely that they will remain neutral and if not, pro-BN. Generally, soldiers do not like PAS. The officers know what happened to Pakistan with the hoodlum-like Jimaat-al-Islami. Most of them feel PAS is the home of a bunch of ugly and confused cowards!!

Mike, all items noted.Dang, don't I miss gatherings at the messes and getting my friends to buy beers from NAAFI. Did comradeship amongst the current forces got affected by the different ambiance in the messes today?

Bernard,
The long established tradition (1933)died out, thanks to DSAI. Will brief you personally how we got around it in the Rangers.

I'm a Malay woman living in Terengganu, a PAS supporter. I would like to take this opportunity to express my gratitude and thanks for fighting against our real enemy, the BN/UMNO.Hope you keep on with the burning spirit.

Some may find it useless fighting the giant BN but believe me, you're appreciated.

Dear Zanie,
I lived in Terengganu for 28 years and loved it. I am actually budak Taiping same with Zorro. Please tell us:
1.Why and how did PAS win Terengganu in 1999?
2.Why did PAS lose the State to BN in 2004?
Btw, I am not pro-BN but I wish that PAS will exercise uncommon sense which it lacks so badly.
The senior numbers are so easily bribed by UMNO. Hadi Awang has been promised as the ambassador to Egypt: Nashruddin Isa will be a minister in the PM Dept and Hasan Ali will be MB of Selangor. They are euphoric to suck up in a joint-venture with UMNO. Bodoh betul!!

Hi Julian, Unker Zorro
wat's the link to M2DAY, I miss Pete's articles so much. The Bloody MF MCMC have blocked M2DAY