AN ALERT FROM PATRICK TEOH 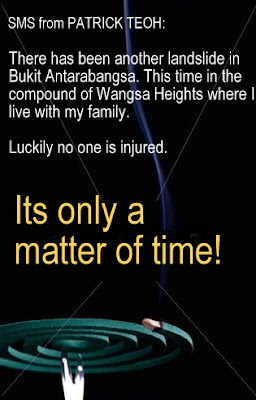 Better sell the property and move out quick!

The dwellers look
What to do?
Hill slopes developments
The developers sing their tunes
Like the Paid Piper of folklore story
Wake up before it is too late

Now she sends warnings
The natural disasters will begin
Sending physical messages
Don't wait.....it's only a matter of time
Disasters will knock your doors
You will be shell shock to run

What now?
It's only a matter of time
The falling cards the crying fools
They still sit on it
“Aiyoh good feng shui
Sitting on the hill
Kings in the clouds”

When the legs aren't on the ground
Asking for troubles the saying of old
Get out before it is too late
Nature sends warnings
Heed the advice run for your life!

my prayers are with you and your family-------hopw you are the niamah guy no big deal if not ok?

The mainstream media, except for RTM Radio news (which I hear regularly) is not stating anything about this grave incident....

Did a check of the online pages of NST, The Star, Bernama...

Majority affected are those not celebrating Hari Raya? hence no media coverage and 'sos' for support?

Even the guy in charge of the paper that cares...no where to be found with his/his paper's concern for the residents of that area.

All using Hari Raya as the excuse?

Another point for use at Bagan Pinang?

Got so much choice, why buy a hillside property and challenge mother nature? Ask for trouble, then don't cry!

Those who stay in Bt Antarabangsa are mostly from the rich and upper middle class. They should have no problem of moving out to another property. The gov should just declare the whole area unsafe.

hello another malaysian,
why the racist view? tv3 showed it last night. its a minor one. but one car owner was unfortunate though. MPAJ should handle this. not the msm medias.

Guess ignorance is not BLISS.... normally bumper sticker says ' You Bang You Pay". In your case, " You Pay You Get Banged".. you pay to live in high rise condo, you get banged by irresponsible developers and Municipal Caouncil ler....