A SHORT LETTER TO MY FRIEND SAKMONGKOLAK47

Ku Li pulled no punches and said it bluntly. Tun M smirked about the candidate. You are one of the very few in UMNO whose views I respect. Before Nomination day I posted that both parties, UMNO and PAS must give to the rakyat in Permatang Pasir WHAT THEY WANT and not give themwhat YOU (UMNO?PAS) HAVE! I was looking forward to a healthy, clean campaign. Looking back now it was wishful thinking on my part. Naieve to be exact. Getting a royal bashing is BN calon Rohaizat. His deck of cards are collapsing with one misstep after another and he still soldier on? The campaign has now taken on a racist overtone and demonising of individuals seem to be the order of the day.......and we are into the holy month of Ramadan. Datuk, what is your answer to all these? I am just perplexed! 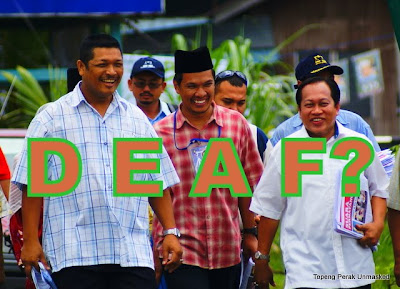 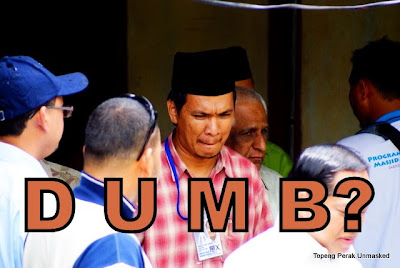 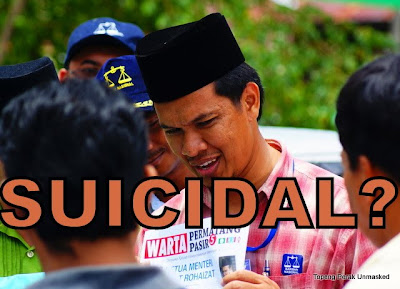 PS: I apologise for putting you thru this on a Sunday.
Please extend my fond regards to Mamasita Mamamia

PPS: I was tickled by your reference to some rancid curry!!

UMNO is scraping the bottom of the barrel.

How about featuring steadyaku47 for your forthcoming Friday posts?

dear zorro,
may thanks for the short letter. i shall answer that in a second part of my present article- UMNO's challenge and Response.
with warmest regards/ sakmongkol ak47.

I think whoever Be End's candidate is, that fella sure has got a deposit payment of maybe at least a minimum of MYR5 million in cash...

BN by choosing such a person as the best candidate is doing PAS a Great Favour. There is going to a stupendous PAS Victory!

Hope Pas by now,the Hadi faction, will have learnt their lessons not to be fragmented into two camps.

I had the some thoughts thinking UMNO had fielded a better candidate this time, but was informed by my friends that UMNO had very few or no clean and capable leaders seems to be true. As I had been told, rogues will select another rogue otherwise they will be exposed by the better guys who have integrity and are capable. Not only UMNO suffers from this syndrome but to a certain level various ministries. When we do not Insaf this is the result and more debacles to come.
Who suffers most from the debacles i.e. the Rakyat especially the Malays who are on the end line of the corruption. If we do not stop this corruption line then the Malay generations to come will lose out. It's like saying I will join UMNO so that I can become well connected i.e. in simpler terms "rich".

So the opposition must make efforts to fill up this gap on credible leadership esp. PAS Vis a Vis PKR. To fill up areas where UMNO Reps are found lacking.
The opposition must show that they uphold the present constitution, progressive efficiency level vis a vis good governance, create an atmosphere of transparency, integrity, fairness for all races where is required (this take time and shrewd political endeavours) ,
political cultural maturity, be politically smart on sensitive issues.

Malaysia is lucky because it's people are patience and are in comfort zone but the comfort zone can delude us. So whatever group we are we should choose better leaders than some of those that are elected. Rogues select rogues. So do not be a rogue, think carefully and balance the system so that they know that they have to be on their feet to be reelected.

It's not that BN are so bad or PR so good but when leaders do not want to admit to their mistakes by trying to point others mistakes ( much less serious than theirs esp BN Leaders) and are tainted then Leaders like this can be manipulated and it's bad in the long run for Malaysia.

[O my Servants who have transgressed against their souls! Do not despair of the Mercy of Allah: for Allah forgives all sins: for He is Oft-Forgiving, Most Merciful. Turn to your Lord (in repentance) and bow to His Will, before the Penalty comes upon you: after that you shall not be helped.] (Az-Zumar 39:53–54)

We all should supplicate to Allah SWT Insya'Allah we would get better leaders soon before bigger debacles come into being.

When selecting an ADUN his moral character is important. So what are u trying to imply that it's Ramadan. Wars were fought and one by the Prophet SAW. in Ramadan. When we select an Imam for the Masjid there so many criteria. So the same goes in selecting an ADUN. If all his bad leadership characters were hidden, then he is like a wolf in sheep clothing and if the person is a BN candidate make it very bad situation.
Ps, to repeat it:
So whatever group we are we should choose better leaders than some of those that are elected. Rogues select rogues. So do not be a rogue, think carefully and balance the system so that they know that they have to be on their feet to be reelected.
It's not that BN are so bad or PR so good but when leaders do not want to admit to their mistakes by trying to point others mistakes ( much less serious than theirs) and are tainted then Leaders like this can be manipulated and it's bad in the long run for Malaysia. Peace.

Dear Zorro,
What’s the fuss?
Even ex-convict (on corruption) also can become MP and opposition leader.
So, let the PP people choose.
After all, this is Politics.

what happen to topeng perak unmasked? Can't open since the publication of the SPRM letter.

THIS IS CALL BIG TIME FARK UP !

ALL BECAUSE THEY ARE ALL ONE MALAYSIA - LED BY A HEAD LESS COCK WHICH IS "BLOODY COCK UP BUGGERS"!

Permatang Pasir is just a red herring, PAS had thought this thru 3 steps ahead of the game.
Sorri long time no comment on your blog Unker Zorro

Herr General....good to have you in this box. Did you read Sak's reference to a rancid fish smell? I thought you were spending a lot of your energy on those two bigots from the Bru's stable. Stay well, bruder.

the choice of rohaizat is not limited just as a political sideshow as it went further beyond it.
It is now a comedy show since the "father in law" is looking for him.

However we should not just look at umno's antics and forget about the many problems PR is facing.
We have garbage in Kedah and rubbish in Selangor . We also have an umno fella masquerading as a PKR MP from Kulim.
Some bloggers said Perak and Sarawak might have simultaneous state election soon.
Any news from your usual "hantu"?