MY FRIDAY GUEST BLOGGER ON SATURDAY: WHAT A LULU

I have known LULU HERE, since I started blogging in early 2007, which is not very long ago. In those early days she usually stays a comfortable distance away from me because she can't stand smoke. We are OK now as I think she likes the flavor of tobacco smoke to cigarette smoke. She has been on my blogroll from the start. Yes, Lulu is a lady blogger. Like all ladies, she is comely, guarded; she might give you a friendly nudge; she, like most ladies, can pinch; but if you get on her wrong side (any side) she can deliver a kick between there......in her writings of course. You will know when she is not pleased, like now: 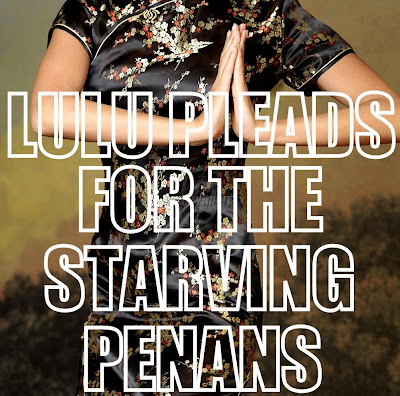 If The Army Could Run Program Berbentuk Kemasyarakatan In Permatang Pasir, Lulu Hopes They Can Do The Same For Starving Penans in Sarawak

The military doctors very kindly helped do medical screening and aid at permatang pasir, coinciding [oh what luck!] with the permatang pasir by-elections.

The Orang Asals in the interior of are now are facing acute food shortage. Whilst most of us are deciding between noodles and rice, McD or KFC, original or hot & spicy, the Penans had faced food shortage in the last four months after their farms were destroyed by insects and monkeys, resulting in poor harvest.

Some individuals have raised money to send food to our fellow anak bangsa who are in hunger.
Unfortunately, the food cannot reach them due to logistic problems.

MIRI: The food shortage problem in central has been worsened after a timber company dismantled an iron bridge that links up to 3,000 people living inside the remote areas.

Efforts to send food aid to the Penans have now been seriously hampered.

Yesterday, more than 1,600 packets of rice weighing 16,000kg were despatched by donors through the Catholic Church.

However, the food supply is stuck at the Sungai Asap settlement, about 50km from the Bakun Dam, as timber lorries used to deliver the food cannot cross the Sungai Linau after the dismantling of the bridge.

The timber concession area was earmarked for flooding this October to create a reservoir for the dam.

Reverend Father Sylvester Ding, aid collection co-ordinator, said it would take a long time to carry food aid across the river by boat.

“We are in a dilemma as to how to send the food to Lusong Laku settlement and SRK Lusong Laku where the food shortage is most acute.

“We have no choice but to seek help from the locals to transport the food across the river.

“We will also try to reach five other settlements near the Indonesian border by other routes. We hope the weather will be favourable, as it has been a few weeks since supply reached those in need,” he said.

In the mean time, the Penans live in hunger.

Below are pics of the military involvement during the Bukit Antarabangsa landslide disaster. The did a splendid job, rescuing residents, deploying food for the affected residents, and built a bridge to facilitate operations.

CAN THEY DO THE SAME FOR THE PENANS.....THEY ARE OUR PEOPLE TOO!

The Police does not have sufficient funds to send an Investigating Officer to look into the rape of Penan girls. Maybe the Minister of Defence can send an army medical corp into the interior to give these poor girls a chance. PLEASE. And please sir, send our boys to build them a bridge so that food can reach the starving Penans. 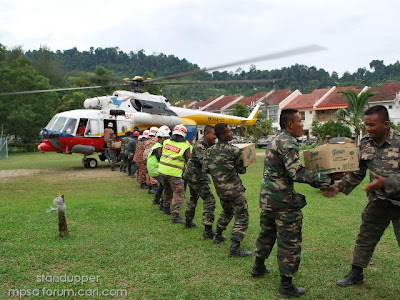 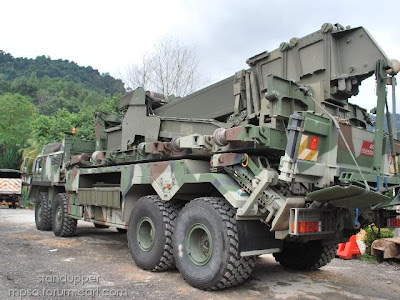 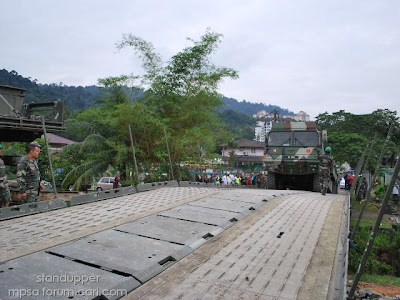 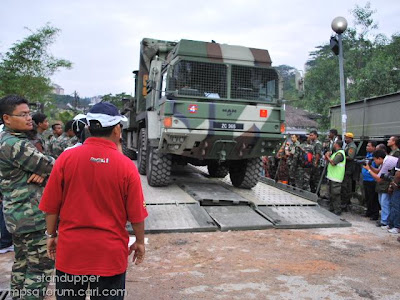 Looks like an MP from this Penan area must either die or terminated for another by-election before the whole BN machineries using the full Army food ration, bridges and medical & housing facilities could be available. Can abybody do something to change the MP in this Penan area?

the military force is too busy preparing to handle next demonstration....

Those who have the mean are not doing anything to help like those who own helicopters under the state govt or for that matter those loggers are very inhumane for doing nothing after ripping the jungle bare of their logs. Their ill gotten wealth even if it is looks legitimate would not undo the damage done to the inhumane treatment to their fellow human beings. I hope the people will punish the current ruling govt come next GE.

We appeal to all parties[bn amd pr]and our PM,please arrange a heli drop on the first instant.
Make Ramadan what it should be,unlimited compassion.We can pick up the politic next by-election.

This corrupted and arrogant UMNO/BN government, their lackeys and cronies in Sabah/Sarawak are inhuman bastards who don't care for the natives, the real bumiputeras of the land.

The lapdogs of the UMNO/BN who represent the welfare of the natives are only taking all they can from the native ancestral land but giving NOTHING in return.

What is Najis talking of 1Malaysia when he does not care for the suffering of the poor Penans and other natives?

UMNO/BN is just behaving like the British Imperialists, raping the land and the people to amass wealth for themselves and their cronies.

Is 1Malaysia another form of neo-colonialism and apartheid?

Hope the cowards in Sabah and Sarawak who give support to this corrupted and arrogant central government pull out, that is if they have any sense of rectitude and fairplay.

Since Mamak Kutty's infamous totalitarian governance, UMNO/BN has been behaving like the hordes of barbarians who invaded, plundered and raped and subjugated the natives.

Now NEP has taken on a new hydra head in the form of 1Malaysia which is more like 1Melayu, all and everything for the Melayu in UMNO.

Do you know that the military top bras are all idiots as they have the same brain as UMNO leaders.
So don't expect any initiatives from the military.

oh! please! this lulu is not so tolerant towards comments.if a blogger who writes about politics can't accept negative comments on the articles then they should not blog about politics.lulu is a coward whom can't accept rational critics on the subject of politics.at the end of the day ,we are all hypocrites.are we not ,zorro?

Anon525pm.....give them a break. Let's not be too judgemental. They did a good job at Bukit Antarabangsa. Let's give them the credit. Maybe they might answer this call/appeal to help. Let's be positive. If nothing happens, at least we tried.

Awwww I dunno, seems to me that singing Negaraku is a risky affair unless Rais (the orphan) can come to terms on the settlement of royalties to be paid to Indonesia going by this:

“Copying the song is a violation of intellectual property rights according to the law. We demand that the government take strong action, not just send a note of protest.

“We have to unite against Malaysia, as they keep on stealing Indonesia’s assets,” Ruktiningsih said.

Lokananta lawyer Jaka Irwanta said “Terang Bulan” and “Negaraku” were 80 percent the same. “We will take the case to the International Court [of Justice] if the Indonesian government is incapable of taking no stronger action than a protest note,” Jaka said.

GO FOR FOOD AND DRINK THAT WILL LAST

Those in Bukit Antarabangsa landslide disaster were rich and vocal owning bungalows and posh cars compare to those slums in Sarawak. Gov can't afford to have criticism from the Bt Anatarabagsa victims.

who is that timber company? can something be done to them for their inhumane action? what's wrong with leaving the bridge intact?