THIS HERALDS THE END FOR BN? 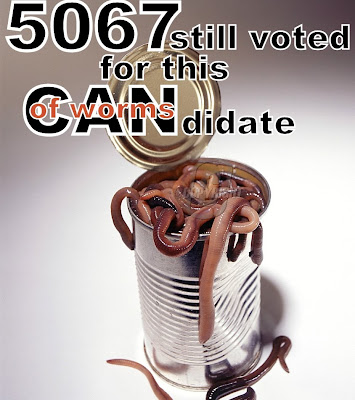 THIS IS BEYOND COMPREHENSION!

WHAT DOES THIS SAY ABOUT VALUES?

DOES THIS REFLECT ON THE QUALITY OF THOSE WHO RULE?

IS THIS HOW CROOKS GET INTO PARLIAMENT?

IS THIS HOW WE ATTRACT INVESTORS?

HOW WILL THEY EXPLAIN THIS TO THEIR CHILDREN?

Some of them may not have read the newspaper so do not know about the disbarment or his cheating of 161,000.00 or they are hardcore UMNO supporters or they may have been brainwashed by Moooheeeddeeen who keep telling them lies after lies.

No worries, the kleptocracy is on the way out.

Hi Uncle Zorro Congratulation on a sucessful mission accomplished.We malaysian are very grateful to you and buddies for bringing us nearer to be SAYA ANAK BANGSA MALAYSIA.God bless you all and keep on your noble sacrifice for a better Malaysia.By the way only idiots without intergrity and senses still voted for the BN .

Bernard,
Hassan Ali, the PAS commissioner of Selangor is a bigger or in fact the biggest can of worms in PR followed sharpishly by the fraud Zulkifli Noordin.
I'll never vote PR as long as these two bigoted anarchists are being retained to destroy Malaysia by DSAI.

You must thank MCA lah. If not, more would have voted for that shit candidate Rohaizat.

Luckily some MCA blokes, unhappy that they weren't able get their dirty hands into some deals, told voters to vote PAS instead. My cousin told me that he wanted to go cast his vote but an MCA guy told him not to go because it was unsafe as riots had broken out in some places.

So it was thanks to some MCA blokes lah.

The evil dragon must first appear,before the dragon slayer become relevant least tosay being a people's hero.
Ride on Zorro,it is heart warming to see the devil piss in their pants

Don't act like you are the God. You are insulting those voters who has the right under democracy to vote anyone they want. If they think BN is better, it is your duty to explain to them what you think is right NOT insult them.

Although I will never vote for BN, I will also not cast my vote for Pakatan if the likes of Zul Nordin, Hassan Ali, Wee Choo Keong et al remain in the coalition.

My only hope is that a new people's party as championed by Haris Ibrahim will be set up in time for the next GE.

Anwar Ibrahim & Lim Kit Siang should not take the results of March 8 as wholesale endorsement of Pakatan - he will be caught flat-footed if Ong Tee Keat managed to pull off his spectacular rehabilition of MCA.

Time to get down to work and prove that progress will be made for the poor voters resting on hopes.

Sometimes, too much power brings about complacency and PAS is well known for this.

The voters have spoken. They want skull caps to sell, so, they got what they wanted.

For the losers, good lesson but lessons must be learnt, not repeated.

anon 9.11pm, pls dont claim the moral high ground here. we are on a roll here - with our evil-umno-bashing.

Bro Z,
3855 are phantom voters as that Kera Jamban claim there are in PP.
I knew that exact figure cause they prepared them and put the blame on oppo camp.
Another 1000 maybe their suppoter who get big lim sum and contracts,
tteh rest salah pangkah due to buta huruf.

This is what Dr M calls blind loyalty.

please lah, you come to a wrong playground!.....go visit the umno cyber troopers.....and talk their lingo....till the cows parade home!......

when even a small kid knows between right and wrong, how can umno put up a CHEAT to be a people representative......

my cue is this. They know this is Anwar;s playground and no way they can ever win....so find a default guy to justify the SURE LOSS!....

and SOMEBODY still wants to talk on a moral highground?. You should meet my 12 year old son, he will grind you till you run away NAKED!!!

mike... because of them 2... you'll rather give this country to hundreds of corrupts MPs?
wooo... that's not a good thing to do mike...

it's okey if you don't want to vote them 2... but i don't think both of them will be contesting at your constituent right???

The 5000 or so votes are protest votes

Protesting against Lim Guan Eng who does NOTHING for Penang

i will also not vote DAP if people like jeff ooi and tony pua who thinks they can say whatever they want towards muslims and islam.but comes next election i will still vote tan kok wai in mt parlimen.

Despite many calls to PR leaders to take immediate actions on Hassan Ali, Zulkifli Nordin and Wee Choo Keong who are all having personal agenda by remaining in PR on behalf of BN, no action at all has been taken.

This is a cancerous situation as seen by counteractions such as support for the "katak" Radzi (Lunas), siok sendiri proclaimed champion of Islam (with no eyes for other races) and gangster calling others gangster. This cancer growth must be cut off immediately. So what if PR is less 2-3 MPs seats? Or less 2-3 ADUN seats? Come clean and you will gain more support from fence sitters and come GE13, I strongly believe that Bn will not get 5067 votes here but get only 2067 votes from diehard members.

Datuk Seri Anwar Ibrahim, can you hear our pleas? Bro Zorro, maybe you can start a campaign on this matter top cut off the cancer inside PR by giving these trojan horse or renegrades the boot?

Hello Uncle Z,
Again PR won and congratulations. As to the 5000 odd people who voted for BN, brings me to mind about the game of cricket. My former teacher once said: "Only mad dogs and Englishman plays cricket."
So this is a fine analogy to these 5000 voters - "Only mad dogs and Englishman will vote BN." Since they are not Englishmen - you can draw your conclusions.
So again Uncle take good care and God Blessed.

so zorro, yes current BN-UMNO is bad. but Pakatan should be aware that we are voting them, partly because we believe in the change they can bring, but more because we are fed up with BN. no need to think high and mighty of yourselves. that includes the little ones and the big ones.

anon at 10.30pm.
you're an effing idiot. there. i said it. no need to claim high moral ground. i'm just bashing retards.

(hint: it's not about beer, it's about freedom of choice, equality and all those good shit)

That lies our challenge sir! We need to convince these stupid fellas to vote for Pakatan next time around.How? Keep on doing what you are doing uncle Zorro!

This is beyond comprehension!... really?

The only thing shameful here, is how senile old men work themselves into a delusion of self-righteousness, blind to the facts and subscribing to the fantasy that the cause they subscribe to is unquestionably superior in every way.

Uncle Zorro
5067 are retarded rakyat, don't blame them but pity their souls for being retarded is hard to live by.

ignore them do more good that condemn them 5067!