TIME FOR PR LEADERS TO TAKE OFF THOSE KID GLOVES AND CRACK THE WHIP. 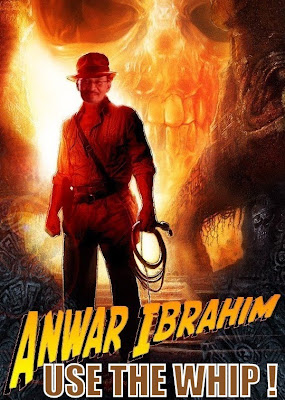 I have always sided with the underdog, and the oppressed I never subscribed to the concerted effort by the Mahathir administration to crucify Anwar. I went AWOL from work to join the movement at Kesas. Word got back to the Managing Director and I was asked to show cause why I should not be suspended. I told my boss to do what he thought best. He saw my point after many beers at the Clubhouse.

The sight of young traumatised Nurul is still very fresh in my mind. The stoical calm of Kak Wan is indelibly etched and Anwar’s black-eye-beating will remain a black mark in Malaysian history. Those were the dark days when the sitting government conspired wholeheartedly to persecuted a family. It was my prayerful wish then that such travesty will not visit this country again. Alas, round two is set to begin. As such it is natural for Datuk Seri Anwar to be distracted by this dastardly accusation. He needs to look at what he has achieved thus far. He has brought together what was well nigh impossible – the coalition of the impossible. This seemingly impossible became possible with the trouncing of BN and denying it the two-third they enjoyed for decades.

Quarrelling amongst each other is a natural phenomena; parents quarrel but if quarrelling disrupts the family and becomes chronic, this has to be addressed. This incessant quarrel must stop and surprisingly it is Anwar’s boys that started this.

It is time Anwar cracks the whip. Better to amputate one limb before it infest the whole body mass. Zulkifli Nordin MUST GO. Will DSAI do it? Will PAS and DAP also rein in their delinquents? We will see how this plays out at Permatang Pasir.

Oh how I do admire you and your spirit:) This anak bangsa Malaysia supports your motion.
And most of all do take care of yourself.

Very well said.They have to axe a few
recalcitrant bloke to put a stop to
the petty quarrel and squabbling.
Those that cannot toe the party line
should not be allow to be there.
Pakatan should speak with one voice
and work very hard to thaw the
onslaught of Barisan's might.

your campaign to kick zulkifli nordin is based on what,whose or which view?

hope you are not being biased and view your view lopsidedly...
tq

How about u organize a demo by the people at each PKR, PAS & DAP HQ demand them to buckle up, grow up or else!!!!

If PR wish to stay longer, it's imperative that they speak with one voice.

Seek a common stand for the good of all Malaysians albeit with little sacrifices here and there.

Failing which, they will lose all they have gained and ruin the hopes of all who had voted for change!

And yes, PR can do with less trouble making people!

This is a mettle test. In as much the former PM never carry the stick in as much as he had wanted to during his tenure as the PM, let's see whether Datuk Seri Anwar is made of sterner stuff when the chips are down.
malsia1206

Ya. Pain in the ass must go.

Dont take pain , take them away.

since it's cancerous, the tumors have to go. Else, it will only spread all over, engulfing the healthy, young cells. There's not much time left!!!

anwar is the pain in the ass
he only cares about himself
lim guan eng is a lame duck. what has he done so far after becoming cm of penang?
nizar couldn't hang on to Perak
selangor will go next because khalid is a joke.

way to go uncle zorro...the leaders must realize that they need to stop future incoming goons from making more damage to the
PR reputation..sack em..

I am waiting for such an action to be taken but knowing PR's weakness, they will never censure or suspend or even sack their elected reps. They are still trying to cure the cancer but knowing its better to amputate the cancerous part, they dare nor as they got no sticks to use lah...

This is PR for us and everyday we haer of PR leaders shouting and scolding BN leaders of inactions, we also see inactions within PR. Maybe they are both trying to see who makes the first move and then only follow.

The best PR can do is not to field Zukifli Noordin or maybe also Wee Choo Keong but guess Hassan Ali will be retained by PAS and so does Jeff Ooi for DAP.

Zorro, no need to pull your hair in frustration lah and it will reamin as status quo till GE13 and then PR will see itself do badly and Selangor will be under BN again but definitely not under Toyol anymore. Just wait and see...dont be so optimistic on any actions from the stick for PR.

What happened to freedom of speech, right of expression and democracy? The Kulim MP was probably excercising his rights, so there is no need for him to go.

If he has to go, his voters should be the ones to vote him out, not kicked out by other means.

Surely his voters will be up in arms if he was to be shown the door without their consent.

The way to go is for the Party whip to call him up to face the disciplinary board. Stop his allowance for a few months, and see if he will tow the line or not when he runs out of cash.

Yes, that's the way of Pakatan. Just shut up their own MP with opposite opinion or critics and everything will be fine.

No lah, Zulkifli is bad but not the worst.

At least he still votes with Pakatan in Parliament.

The first person to go must be Ibrahim Ali, he has totally sided with Barisan Najis.

He openly votes with them !!! Idiot.

Zulkifli Nordin is not the only one that should be dumped. The likes of Ronnie Liu & Jeff Ooi should be shown the door as well.

I do not agree for Anwar to kick him out. The people/rakyat who put him at his place now. So let them decide, to keep him or kick him.

Sorry out of topic..

I was just wondering what happened to Antares' blog? Has he changed blog address or decided to stop blogging? Too bad because i really enjoyed his posts

Ibrahim Ali must go? go where? he is an independent la...

Anwar use the Whip ? Kinda Kinky dont you think Zorro ! He just might !

Crack the whip? That is not democracy but dictatorship, no? A true democracy must have room for healthy debates and disagreements. After 50 years, are we not mature enough to agree to disagree? We must learn to respect, not just tolerate, but respect another's opinion, way of life, religion, etc. We may not agree, we may not accept (as our way), but the least we can do is Respect. Transparency is very important, and channels to communicate to the rakyat must always remain open.

Magdelina....spoke to Antares earlier. Evidently his site has been flagged and Google closes it down as a result. He has communicated with Google Forum and it should be up in about 48 hours. Could be something mischievous afoot.

PKR NEEDS TO BE CAREFUL!

THEY WILL ALWAYS BE TURNCOATS AND DOUBLE AGENTS.

ALL FREE MONEY TO GIVE AWAY...

WHO EVER WANTS MONEY...GO SIGN AN UMNO MEMBER FORM.

The ones to go should be Anwar,LGE,LKS,NIK AZIZ,NIZAR....they are the real trouble makers.

Replace them all and maybe PR has the chance to win more states and maybe become the ruling party. As for now you can see how screwed PR are.