SUNDAY SNACKS OR SNAPS .....depending on your tastebuds. 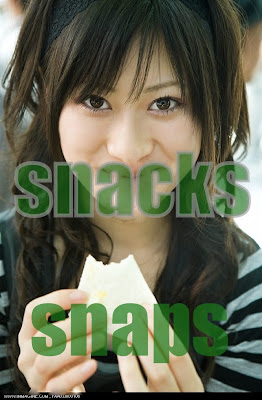 Swallow it, ladies, it’s good for you

So posted Vanitha of Writestreet. The less inhibited of my lady friends might venture into this but for sure you will not pass out permanently. On the contrary it might even save your life. I have no right to be giving advice of this nature but if you want to be adventurous….do take it with a pinch of salt.

Find out more about this new “miracle” HERE

and her dessert HERE.

THE TEAM IS LOOKING FOR SOME PERMANENT INK…..for indelible effects!

Just two days ago questions about the SJSandTeam have criss-crossed the local blogosphere and blogs like mine were expected to know.

This is what happened according to CariForum:

SjsAndTeam.wordpress.com was recently shut down by the blog owners after fears for the safety of the team & the readers. Apparently SjsAndTeam were taking care of Raja in . SJSAndTeam did the right thing by stopping the tracks & giving the police a hard time to catch Raja .

Nevertheless, this is a popular website that recently hit 4 million visitors in 7 months, just below Mahathir’s blog. Its seemed very serious that a website with this magnitude to close entirely because the police were after Raja Petra

I got this assurance from Motherchell when he visited and posted this:

The Might of the Pen will be back all ready for the new battles ahead. For now we need Pete to be safe

MUCH, MUCH BETTER THAN MINE

Last Tuesday I did a post “They Don’t Really Care About Us” http://zorro-zorro-unmasked.blogspot.com/2009/08/they-dont-really-care-about-us.html

But the Dandy Mobsters at Dandelions presentation was way par excellence. Syabas Ella-mae. Must view

WHY GO TO TO SAY IT

Deputy Prime Minister Tan Sri Muhyiddin Yassin said there are groups in Malaysia who are planning to remove the credibility of and erode public confidence in the Malaysian Anti-Corruption Commission (MACC).

He said they were the same people who had previously called for the establishment of such a commission with independent power to investigate anyone, but when this was implemented, they were not happy.

He said they wanted to bring down the image and integrity of the MACC officers so that whatever the agency did would not get the confidence of the people.

Everyone must have confidence in the MACC because it was an independent body that was accorded a royal status, Muhyiddin told reporters here when asked on the death threat made on MACC Chief Commissioner Datuk Seri Ahmad Said Hamdan.

Just because anything has a royal prefix does not guarantee a stamp of veracity. In fact it is sacrilegious. The Royals should be more discerning when lending this statuds to some government agencies….the Police is already a mess and now this MACC.

As to its independence, it is easier to net in that biggie with a 24million mansion (ask Tun Mahatihir) than to go after Pakatan Rakyat aduns. Shame, coming from the #2 man. I sometimes wonder who has grasped whose down there……you dare squeeze, I can squeeze too….and harder. …..and they lived happily ever after…..until GE13! YES?

RAIS YATIM ON THE RUN?

The Prime Minister is turning BLUE over Rais Yatim Green Dam. PM might just turn BLUE-BLACK if the Second Lady’s(Queen is First, yes?) spanking new website gets filtered. Most times, it doesn’t pay to be too clever…..especially if

You do not know the gender of the mouse on the pad.

It is learnt that Rais is going on leave. But first he has to give an adequate answers to those hand-picked bloggers he invited to dinner but this time at Kayu.

"SjsAndTeam.wordpress.com was recently shut down by the blog owners after fears for the safety of the team & the readers."..

Why Sjsandteam fears? Because Loke Siew Fook made this statement:“has everything be reduced to your fucking religion (Islam)”... or you can read here http://khusairitgmalim.blogspot.com/2009/08/sialan-dapsy-loke-hina-sultan-pula.html

SjsAndTeam should thanks to Negeri Sembilan Islamic Religious Affairs Department and the police after the religious authority arrest 20 people from the radical Islamic movement. SjsAndTeam specialy Loke who made racist statement over Islam/Muslim, is in the group list to........, maybe.

I go tru your blog post/comment and this is what I found: "zorro said... Anon6:21pm.....of course free speech has its boundaries....you dont cross the line (boundary)"

Now... loke and SjsAndTeam just cross the line/boundary, when they made the sacastic statement over Islam/Muslim in this country.

In 2005, a research study at the College of Malmö in Sweden suggested that performing unprotected oral sex on a person infected with HPV might increase the risk of oral cancer. The study found that 36 percent of the cancer patients had HPV compared to only 1 percent of the healthy control group.[11]

Another recent study suggests a correlation between oral sex and head and neck cancer. It is believed that this is due to the transmission of human papillomavirus (HPV), a virus that has been implicated in the majority of cervical cancers and which has been detected in throat cancer tissue in numerous studies. The New England Journal of Medicine study concluded that people who had one to five oral-sex partners in their lifetime had approximately a doubled risk of throat cancer compared with those who never engaged in this activity and those with more than five oral-sex partners had a 250% increased risk.[12][13]

sorry seems to be the hardest word...

jeff ooi has become a liability to DAP and PR.

what is so difficult in saying sorry..

it doesnt matter who is right or wrong.

this is malaysia and malaysian are ever willing to say sorry...

No , SJS ran away with his tail between his legs for offending our Sultan.

We are coordinating a retaliation towards those who insult Islam and our sultan. Including you!

Malays wont just keep sitting back and remain silent when pendatangs are insulting our Sultan... Just like what you did in your posting about Raja Nazrin.

You are next. Police report coming soon...

They were shut down for fear of their OWN safety because of the alleged insulting article towards the Perak Royalty. UMNO will use this issue to nail DAP.

I actually enjoyed SJSteam. I remained open, disagree what they wrote at times ( manohara, the sultan etc ), but some of their articles are good. sad to see them ago.

You can also be friends with RPK who was worshipped by his christian friends while having beer in a weird paganistic ritual at a pub.

Or that betrayer Harris whom the non malays cheer on as a "good malay".

Pergi lah menagih puji2an celaka2 kafir tu. They can shower you with praises such as "open minded malay" or "good malay" or "modern malay"..so that they can manipulate you to their liking.

Once they have you balls, you can then fight their battles for them. They love it when they see a malay challenging other malays. Why do u think they accepted Bro Anwar B Ibrahim with open arms? Even though he was an ex UMNO top executive?
And once u belong to them, they can make u lay on the ground with a palestinian flag when DAP lost power in perak. But u dont see DAP cinapeks there at the protest do you? only the "good malays".

Good malays to them are those that insult our king, our race and willing to sit in a pub with them.

Go and be a good malay, and may Allah have mercy on your soul...

You know nothing of Islam, judging from your foul words directed at Melayu-malu.... Go crawl back into your cave in Taliban-land.

The day of reckoning will come, and may Allah have mercy on YOUR soul.

apa ko merepek mangkuk? since when got good malay, bad malay? if you start labeling malays like that, camana nak maju? since when i support PKR, DAP, UMNO?

im just saying the country is ours. we all are united since day 1, and the country belongs to all. at least aku being honest and clean. cara ko cakap ingat ko masuk syurga ke?

watever la. just wished the future would be a better place without racism. sigh.

"..SjsAndTeam specialy Loke who made racist statement over Islam/Muslim, is in the group list to...." -
Sgt Pedro Gonzales.

Now, now, when has religion become racism? A religion is not a race.

There's a Sharanjit @ LKS who starts labelling bloggers(famous oversea ones as "islamophobes". Nope I don't comment there because I don't agree with the manner his Blog is moderated, but I am for his (LKS) Blog, for sure.

"Phobe", implies an irrational fear like as if there is no valid cause for it. We know better don't we?

I believe if they don't behave, the Malays in UMNO will just disappear..like the past when GOD punish and vanished a whole community because it crossed the LINE!