Game over, but BN has not left the field/court. They have done a shitty job here in Permatang Pasir. The least they can do is do some damage control to cover the asses of Muhidi and Hamidi before the vacation-weary and jet-lagged PM comes a visiting. 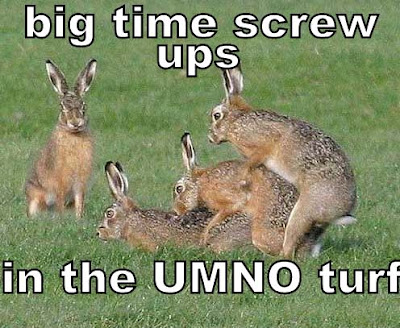 Khairy’s served the phantom vote shuttle at PAS…..PAS returned the shuttle with a message: You have the power to ask for the sacking of the EC chief for gross incompetence. You can even tag the “traitor to UMNO” tag on EC head for allowing this 3855 phantom voters through.

At this mornings PC Datuk Mafuz advised BN calon Rohaizat to challenge his former partner Yusri Isahak to a debate to clear his name. Should the debate materialize, the audience will be told not ask questions about Rohai’s second spouse, as it would distract from the intent of the debate.

Can Rohaizat handle another HOT POTATO?

The Barisan Nasional ceramah at Sama Gagah village was stopped by EC officials following complaints by PKR officials that government machinery was being abused for campaigning purposes. Deputy Information, Communications and Culture Minister Heang Siak Kee stopped her speech half-way and did a disappearing act from the scene. Earlier, she told the audience that senior citizens above 60 can collect RM200 from sthe organizers. Dang! I was to join YB William Leong and YB Sim, but instead got diverted to Kg Cross Street. RM200 could buy the SB some beers.

EC rep and his team also inspected a bus bearing the Welfare Department logo instructed the bus driver to take the bus away whilst Ministry officers were seen desperately taking down buntings and clearing a Women, Family and Community Development Ministry counter. Looks like Sharizat massive figure is insufficient to lure voters. She had to use her officers. Shame, really. Looks like all the KL biggies are messing up a lot for the already beleaguered and disbarred candidate with 2 wives. Sure will be screwed, sorry, whacked by Jibby and set upon by Rosie Dottie.


When the culprits left, poor adun Arif Shah Omar Shah was left alone to face the media. Of course a string of best-in-class UMNO excuses came out from the white-haired assemblyman. 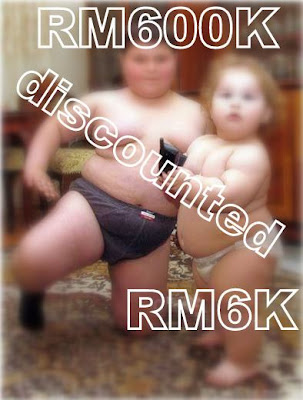 Here is a gem from Dr Mujahid Rawa at last nights ceremah at : Google Money Politics and you see most of the titles have to do with UMNO! Go find out for yourself. He also communicated the good news that UMNO has now given a good discount - the RM600K is now a mere RM6K.

Yes, game over but furtive distribution of racist flyers reminiscent of Permatang Pauh’s by-elections have surfaced and this on the eve of Ramadan. More HERE

Thanks, Zorro for the update.

Could you please update us on the what was covered at ceramahs by PAS? What did they tell the ceramah attendees? How many people turned up? Were they hot, warm or cold towards the ceramahs?

I didn't read much update from you this time round. How come?

Tell us more.....P Pasir by-election sounds like a non-happening event.

You updated us more during Manek Urai.

Look forward to reading more from you....Thank you very much.

May you have a pleasant stay there.....

Zorro,
Thanks for keeping the whole nation informed.

Bro Zorro,
The Kera Jamban of wakil Pos Rembau,sudah pecahkan tembelang cara UBN bawa phantom voters.He said the opposition has their hand in that SPR and National Registration Department who help them to bring phantom voters.
Cammon KJ,
The SPR and that NRD is under Federal Goverment.U just expose to public how your UBN preparing phantom voters fo elections. Its actualy your UBN is ready with 3855 phantom voters with the ur hand in SPR and NRD.But u try to blame the Pakatan. Whose leg are u trying to pull.UR boss that Jibby Al Antu for not giving u a Ministerial post but give your loser.?
The rakyat are smarter than u , the oxford failure.

Thanks Zoro on the updates.

Many has predicted the ending since we all know UMNO has done greater damage in this by-election.

If UMNO tainted candidate win ...that show either the locals are BLIND & easily bought over with $.
Pretty sure the locals are not easily cheated or dumb, right?

can someone pursue the case further? photographic/recordings of the event? criminalize the event. make them pay.

50 YEARS of unfair media/machinery advantage to damn-bn. make them pay. make sure those ministers/deputies/officers crawl into jail or at least fined, with criminal records.

Thanks, Zorro for the update.

very funnie lah these jokers leaders... really short of vitamins A B during their infant days.

You want to know how MCA describe that Pagar that makan the padi to the Chinese voters in Pmtg Pasir ?