We are very aware of the intimidating presence of the PDRM in the past 6 by-elections. They were there by the thousands in Kuala Terengganu. The menacing FRU did their fair share of tear- gassing at Bukit Selambau. The towns where the by-elections were held seemed like an unofficially declared war zone. And this in a country aspiring for developed-nationhood status. In KT, they had horses trotting around the main roads. Probably realizing that cops on horses were not so macho they brought in non-uniformed thuggish-looking cops on scramblers for nomination day in Permatang Pasir! But it amused me that they congregated on the BN side. Again probably the close to 30,000 strong Pakatan Rakyat supporters is no place to play with their scramblers.

An added injection at Permatang Pasir, we learnt, was the presence of Armed Forces personnel. Were they our army boys or were they the Blackwater mercenaries expelled from ?

He said services rendered by members of the armed forces to people of Permatang Pasir were not to canvass for votes in the coming state by-election.

"The services given under the 'Jiwa Murni' programme is not due to politics. We help them in areas that we are good at like medical, engineering and religion.”

PAS vice-president Mahfuz Omar claimed in party portal HarakahDaily that Zahid had used the armed forces to give free medical treatment to voters on behalf of Umno and BN.

Now, lets hear what my friend and fellow Taipingite, M Naser Taib has to say about Armed Forces involvement in elections:

There is an Armed Forces Council Instruction that forbids soldier, airmen or naval personnel from taking part in political canvassing as what the Minister has done. He has given the Defence Chief an "unlawful command". The umpu bodek generals must stop this illegal deployment. Its a blatant abuse. It has never happened before. This will only happen when Short Service Commissioned Officers become generals. Gutless wonders.

SO WILL WE SEE THIS AT THE NEXT 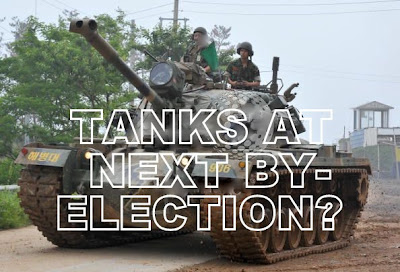 The FRU's water tanker armed with water cannons and heavily steel plated is classified as a tank.

The only main difference is the colour of the tank.

The FRU's might train their new Tazers ( stun gun with 5 meters long wired prong)
This is equivalent as shooting at unarmed citizens.


Today will be the eve of ramadan.
Wishes all Malaysians to be safe and have faith during the fasting month.
Take care PR.
We want to win and we will win.

It will be 'Tank' for water canon truck and 'C4' for tear gas bombs....Mongolian Altantuya's loverboy style!

Zorro,
what Ahmad Zahid Hamidi is doing is WRONG and tantamount to abuse of power and abuse of the Fed Constitution. The ONLY entity that can order such mobilisation is the YD Agong NOT a Minister. Did the Agong give the command?? I think you should blow this up for all to see.

PR gained 5 states and BN "won" one back. Keep on flying the flag people!

They will use their mother and sisters if they have to and they will say its not them......

A bunch of desperadoes and I hope those Mother F''kers will rot forever in Hell.

We all know what these UMNO/BN animals did and are doing now in P Pasir are wrong, but they willl continue with their antics.

This is only the tip of the iceberg. Comes GE13, these animals will not give up power easily....they willl ensure that the army, FRU, PDRM, Rukun Tetangga and the plethora of armoury are out in full force to ensure there is bloodshed should there be any opposition to their power. They will kill if need be to stay in power.

Just watch.....these animals are alreaady building up their guts at each by-election...mobiling more and more arms and personnel.

This is really scary to the laypersons.

Admiral Tojo,
Bro, you still remember from your heavyweight education. Above all, you are the son of who know who? Your dad fought for the country - a real hero. You are a manifestation of his patriotism and devotion to duty. The Malaysian world does make a person like your dad anymore. Solly, Budak-Boy!!

This is only the beginning. In the next general election, I am very sure even the ballot boxes will be under the control of the army. We are slowly but surely moving in that direction - military rule. Anyone dare to bet with me? Say what you like and there is no one in this country who can oppose Najis' army, not DSAI, Hadi, TGNA, LKS/LGE or for that matter of fact the rakyat. Bye-bye democracy.

I have been made to understand that the defence chief is not a short service commissioned officer but a career officer. Hence, he has succeeded in reaching where he is now as the defence chief.