Be wary of the blogs, overseas Malaysians warned


Minister in the Prime Minister’s Department Dr Ahmad Zahid Hamidi cautioned Malaysians abroad, including students, ‘not to be easily influenced by what is being written in blogs about the political development back home’.

According to a Bernama report, Zahid pointed out that many of the blogs ‘were mere allegations’.

He added that reading the blogs out of curiosity without checking them against the mainstream media ‘could poison the mind as many of the contents were not based on facts’.

Students and other Malaysians abroad were advised to ‘balance things out’ by reading the websites of the mainstream media such as Bernama and Utusan which practise ‘ethical writing’. 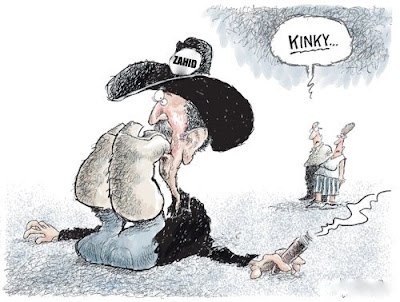 The Malays are cowards, says Utusan

KUALA LUMPUR, Aug 4 — The Umno-owned Utusan Malaysia appeared set to raise the temperature on the race debate when the newspaper published an opinion today calling on the Malays not to be cowards anymore and rise up to face the challenges being posed by the Chinese and Indians in Malaysia.

In an opinion piece written by journalist Noor Azam, the newspaper also continued singling out the Chinese-dominated DAP as the main party manipulating the Malay leaders in the Pakatan Rakyat (PR) into achieving its own agenda.

But the article focused heavily on scare-mongering and warned the Malays that they stood to lose if the PR alliance came to power.

or when lifting a child into the air.

Again, we see UMNO Ministers asking us to believe in so called mainstream media like Utusan and Berita Harian which are all UMNO papers.

Its very clear that the present Cabinet is not interested in taking any actions against these papers which are sowing racial slurs.

Non Malay parties in BN are without balls and dare not raise any voice or even a whimper against this matter. Do we still want such parties to represent us?

Time come in GE13, throw them out no matter what party ther are from...for as long as they are from BN, kick them out. These are Devils and will lead us to hell.

MCA deviates their attention on so called threats on their president, MIC focus on their internal [arty election while Gerakan still searching for a way out and too bust trying to figure how to come out with nice KPI scores for all the terrible corrupted ministries. So Its left to UMNO to do the damage and Najlis is so worked up on his 1Malaysia and the charm of Rosmah. God Save Malaysia

Fuck you Ahmad Zahid Hamidi!! You do NOT have the authority to caution me on anything.

I now give you a warning! Shut your mouth or face the consequences when you least expect it!

"..such as Bernama and Utusan Malaysia which practise ‘ethical writing’."

Seriously, I am a student abroad and I actually tell people back home in Malaysia to burn the MSM papers.

Yes agree. In fact everyone should read only Utusan, NST and Star. They are the only ones capable of telling the truth and nothing but the truth. All others are telling lies, including overseas newspapers and news reports by CNN, BBC, ABC. Bloody joker.

Someone should point out to Utusan, BH etc., that MCA (M'sian Chinese Association) is 100% Chinese dominated while DAP (Democratic Action Party) is more multi-racial by its Constitution and membership.

So, who are they kidding and trying to fool by labelling DAP and indirectly, Pakatan, as racist parties?

Just look at what the acronyms UMNO amd MIC stand for and you get a firm indication of waht BN is all about - race, race and race,

dpp
We are all of 1 race, the Human Race. That is all that really matters.

I agree, so we shouldn't read Jibby's blog or wifey's Rosie blog either. They're full of crap with airbrushed pictures attending events to honour them! Who in the world would want to give away honorary degrees to adulterers, immoral second-hand wife/husband?? Ai yah, all bull-shit la!

All those MARA students sponsored by the Government take note -read Bernama and Utusan Malaysia only. Or maybe your scholarships may be withdrawn. The rest can read whatever they fancy. Maybe 'Malaysia Today' is a good reliable starting reference. Happy now, Information Menteri?
malsia1206

"....And shanghai, you should maintain the integrity of your blog. You cannot allow creeps like anon9:49pm in. We encourage COMMENTS related to the post....but not personal insults.That is gutter mentality.Free speech has its boundaries." - Your comment on ShanghaiFish blog.

Zorro
Now you talk about "FREE SPEECH HAS ITS BOUNDRIES". What happen to you bro?

We just have too many clowns that puffed up in self-conceit , overvalues themself by undervaluing others.
Humility seems to be the long lost word in our time.

But Thanks God- the righteous will not be forsaken.

Anon6:21pm.....of course free speech has its boundaries....you dont cross the line (boundary) by throwing personal insults at the owner of the blog. If you cannot understand that, then there is nothing much I can do bro.

Guys I am tired of hearing PAS people telling me that Umno is unIslamic, read a very nicely written alternative viewpoint here..

Umno's Islam is closer to the spirit of the Faith

Anon6:51pm....whack if you have a good enough reason and facts, but lets not get overboard. I have to hold back many times b'cos I know that I have to maintain credibility.Hate the misdeed but not the person.Dang, I am preaching and I hate doing this. I am sorry bro.

I thought this guy who sold Anwar out is the current Defence Minister. No?

telur dua, the same who was Pemuda chief during DSAI time.

He is the one who harping on the issue of nepotism and cronyism during DSAI time.

Yes, and at the next day's assembly TDM had the whole list of DSAI's cronies pinned on the wall.

no different from Syed Albar! and in the same company as that stammering ex-info minister. Wanna be a Minister from UMNO? Join them.

in my office..we subscribe to the malay papers too..but all the malay staff have the same opinion of the malay msm..."paper ini tak bolih baca..semua tipu"

Okay, this is what the mainstream will write...but given of this scenario, maybe we might consider of exposing the inconvenient truth to the international press.

I'm not saying this is something crazy but something to wake Malaysia to the reality rather than keep on dreaming as if there's nothing happen.

And after that TDM must have given this Dr a whacking he won't forget for the rest of his life. Maybe with some threats thrown in for good measure.

Immediately, with tail between his legs he made a complete U-turn. Smart kid, this fellow. Otherwise he would be the one with the black eye and also beaten half to death.

I was searching for a word to describe something that these UMNOites are missing. Yes, the word is HONOUR. They just don't have it.

Better a coward than a 'traitor.'

This Zahid Hamidi knows how to play political sandiwara.He is now riding high and his bodekness would see him aiming for the next TPM.

we were having breakfast in a hotel in lumut perak,then my son said,"ma olang sulat kaba lama sulah mali"..this olang [dr]was walking with his surat khabar lama in his armpit.see a small kid could tell us what moral mentallity this guy has.